BetaFPV ExpressLRS Micro TX module is the second TX module from BetaFPV. This is JR module sized TX and has a few new things that you can see on the ELRS TX module.

Lets take a close look at this interesting ELRS Module. 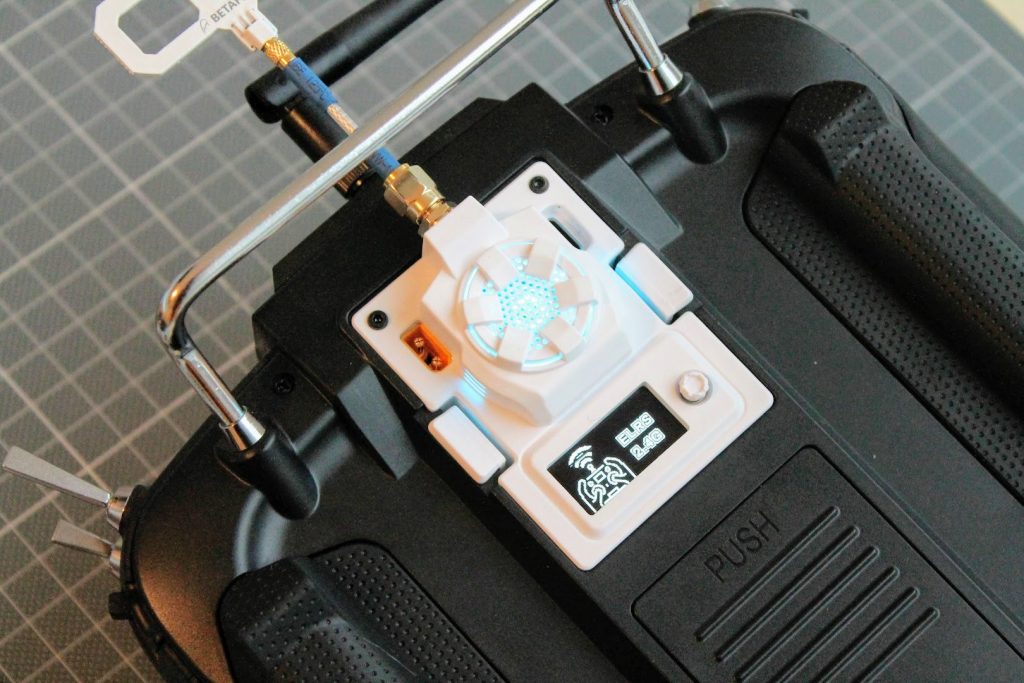 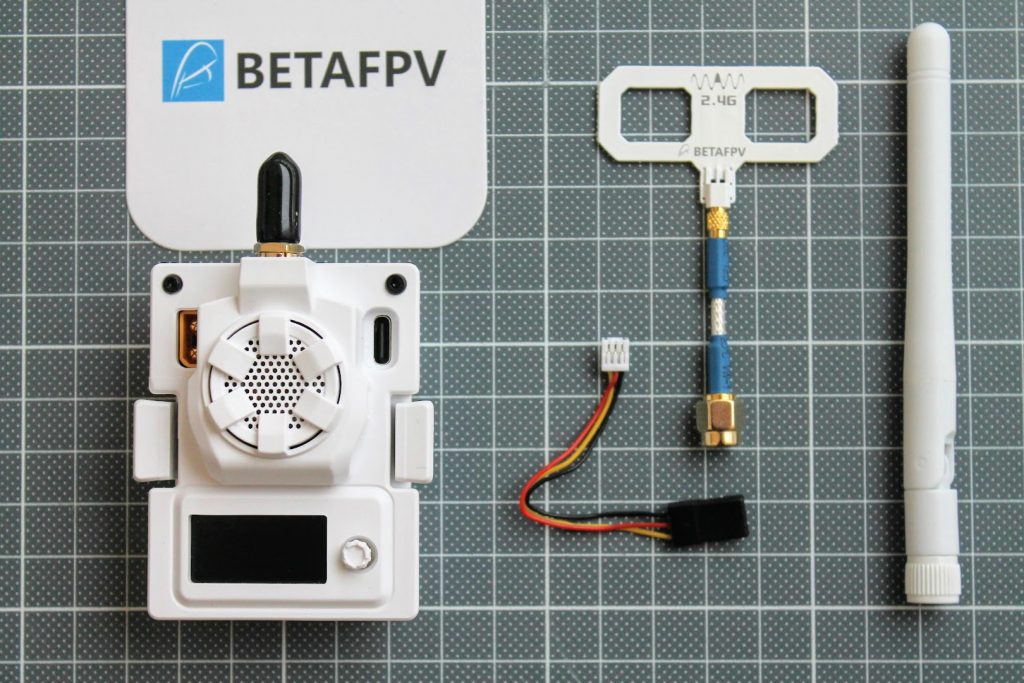 There is a JST-GH 1.25mm 3pin connector socket on the bottom side of the Micro TX module. It can be used for connecting the module with the radios that don’t have the JR module bay (but support CRSF protocol to communicate with the TX module) 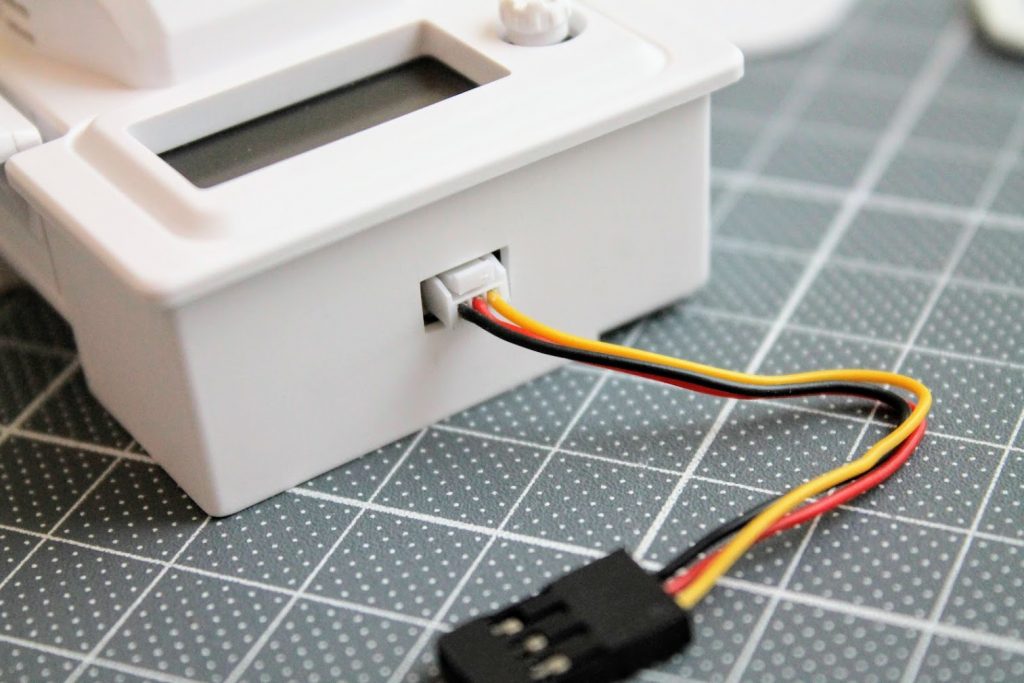 Max allowed input voltage is 12V. DO NOT use 3S or above battery to power up the TX module via XT30 port. Otherwise, the power supply chip in the TX module will be damaged permanently. 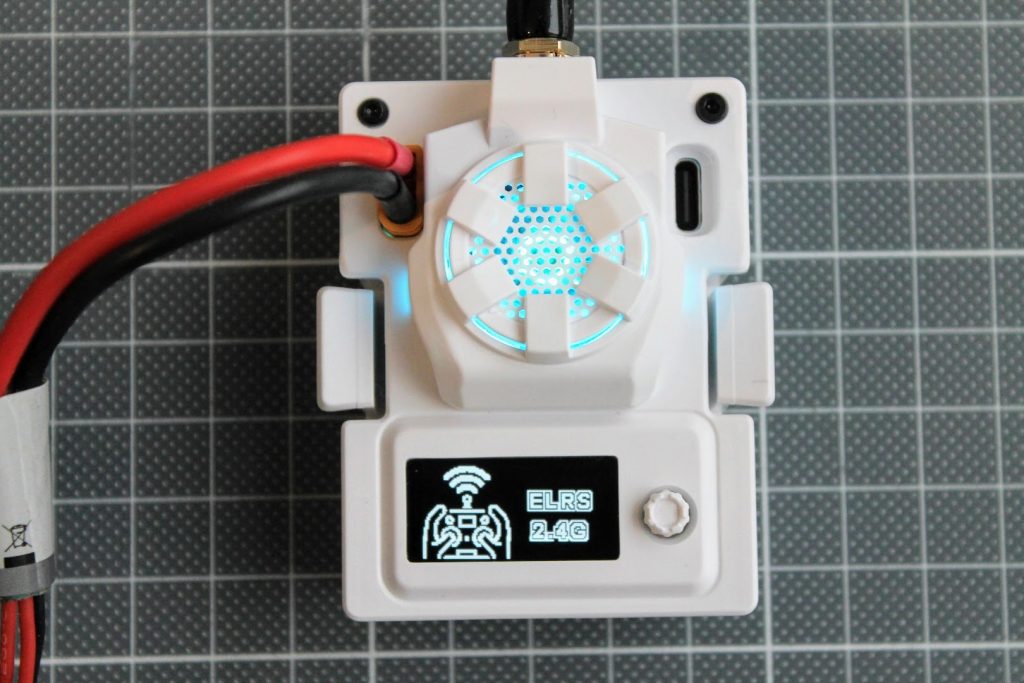 On the top right side of the module you can find the USB Type-C connector slot for connecting the module to the computer and updating the firmware. Read the notes about the USB cable compatibility below. 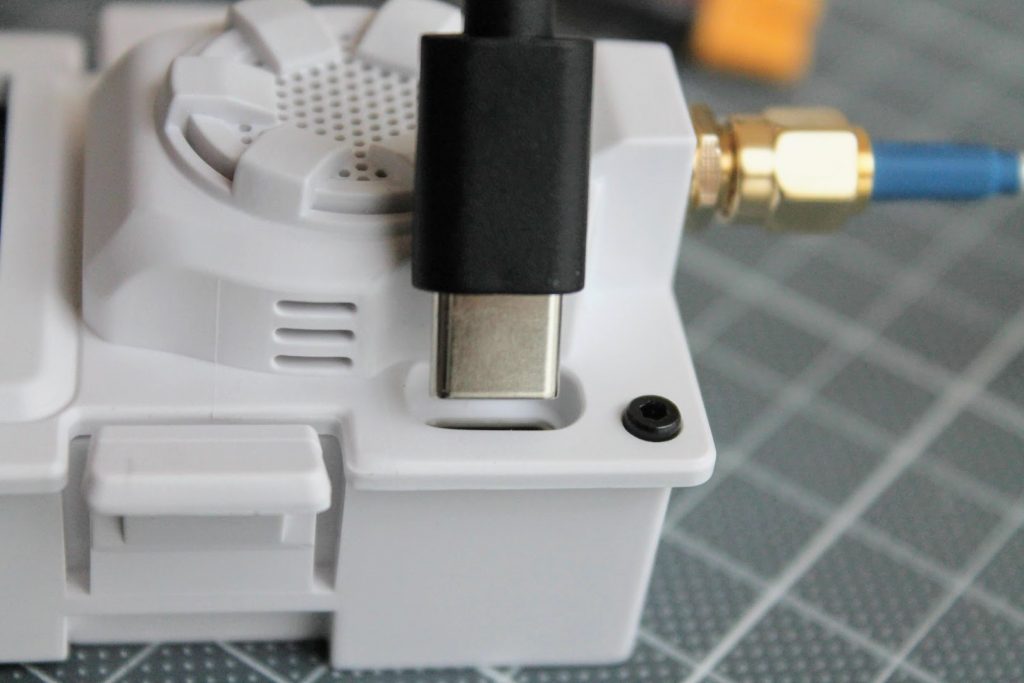 The BetaFPV MicroTX module can be powered by JR bay or can be powered by external power source and be used with ANY radio transmitter that supports CRSF protocol. Examples of such radios: TBS Mambo, Futaba T18SZ, Futaba T16SZ, Flysky NV14 and others.

Inside the module you can find the main PCB, cooling fan, antenna pigtail and the daughter board with OLED screen and 5-way joystick. 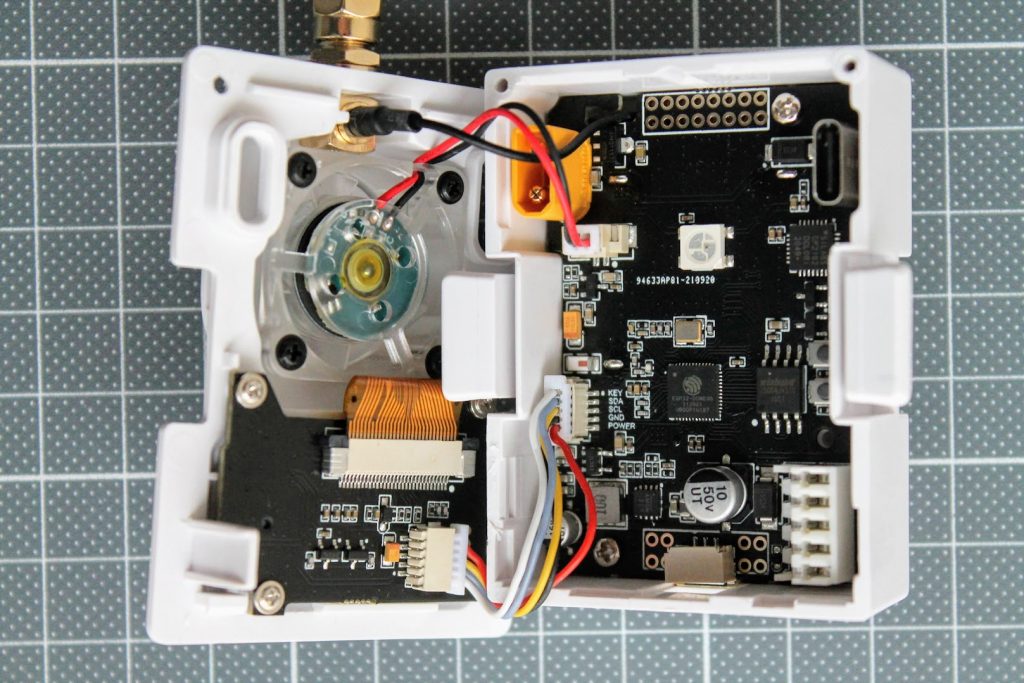 The top and the bottom views of the module PCB.

There is a RGB LED in the middle of the module on the top side and the RF part is located on the bottom of the board.

There is a lot of space inside the module for air to circulate and keep the module cool. RF power output test show that this module does not overheat and power output does not degrade on heating up. 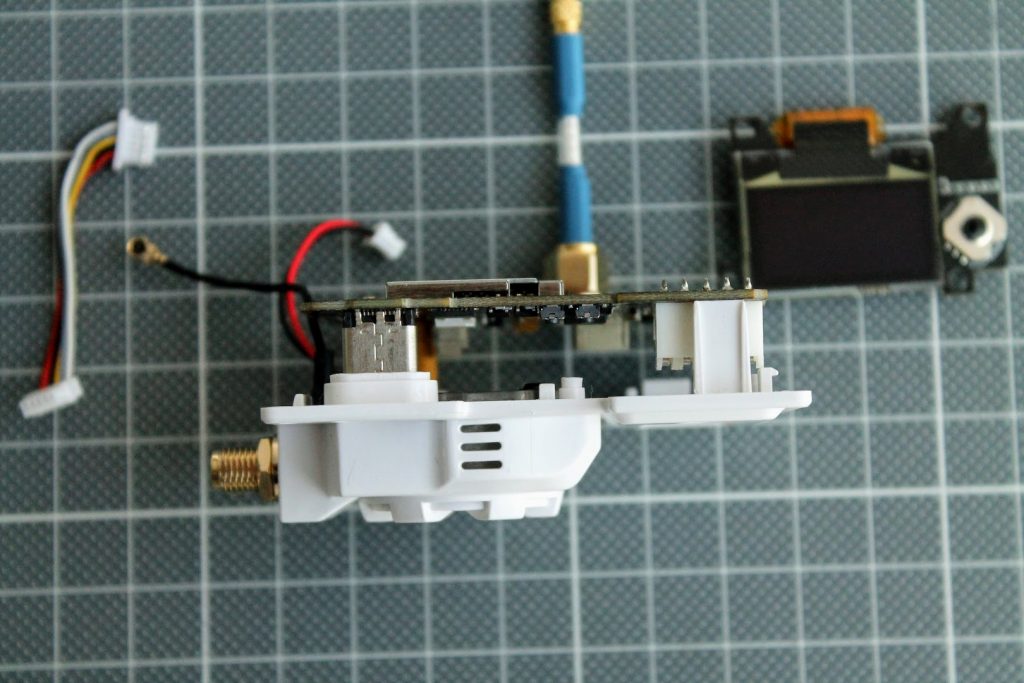 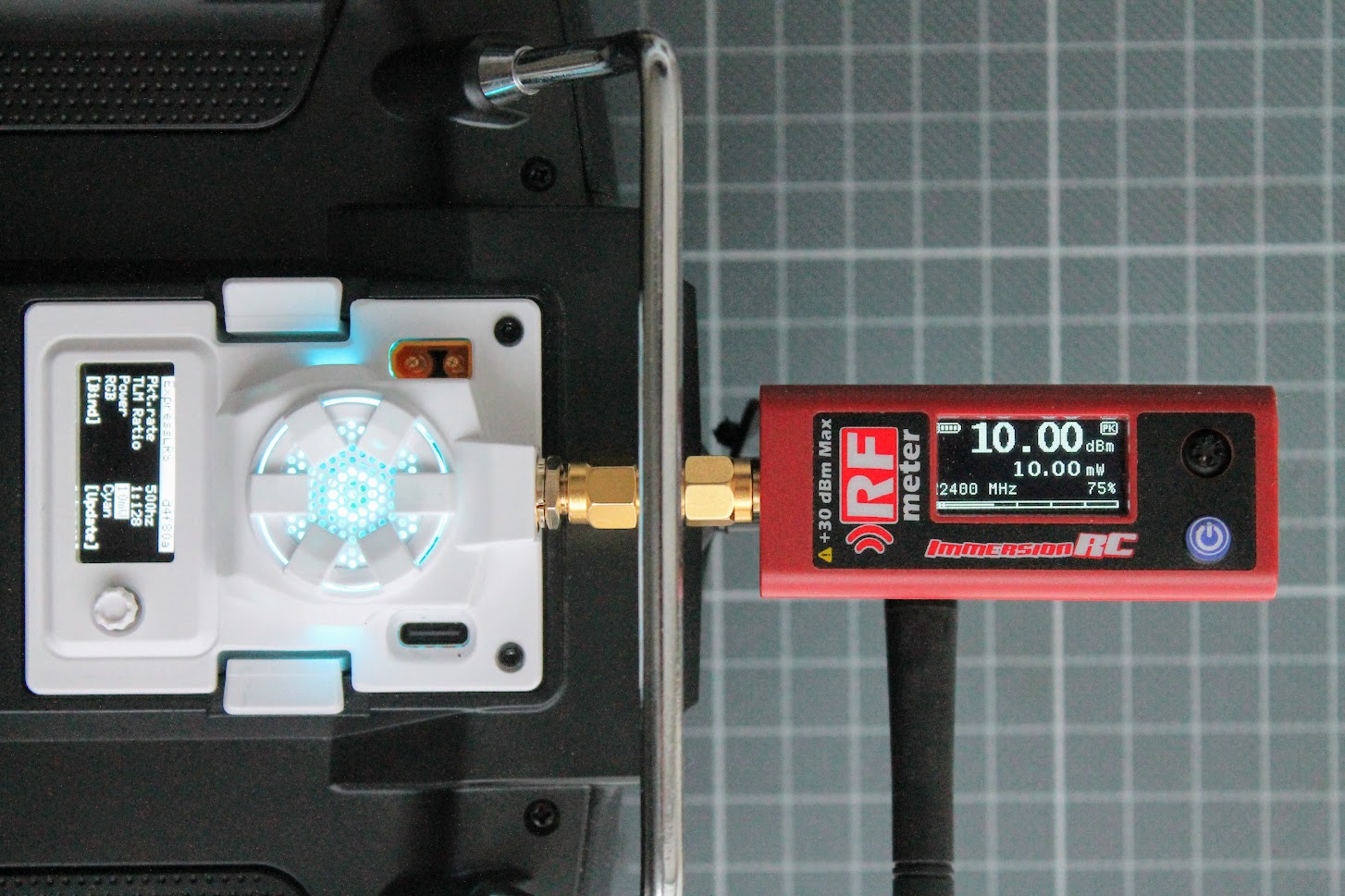 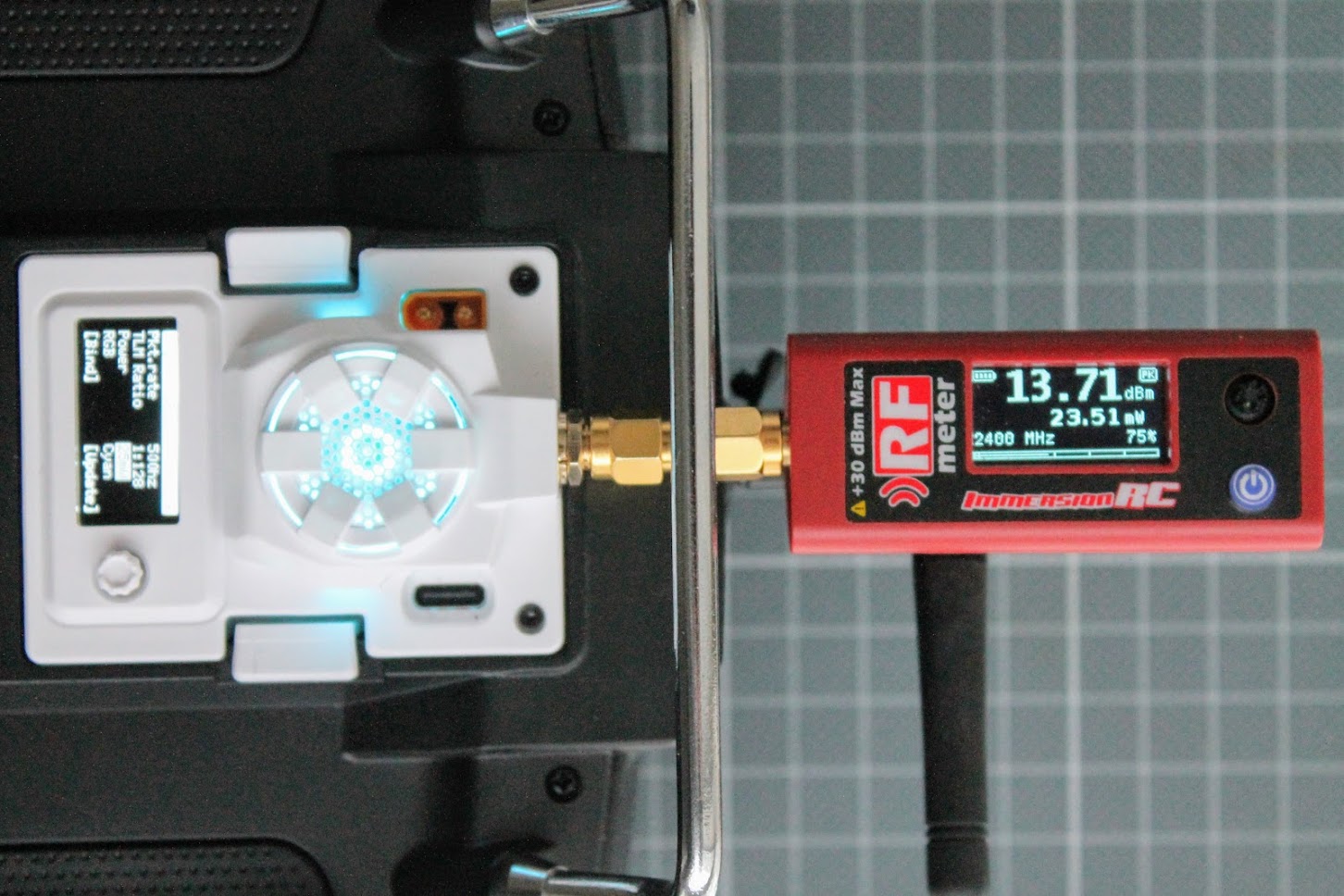 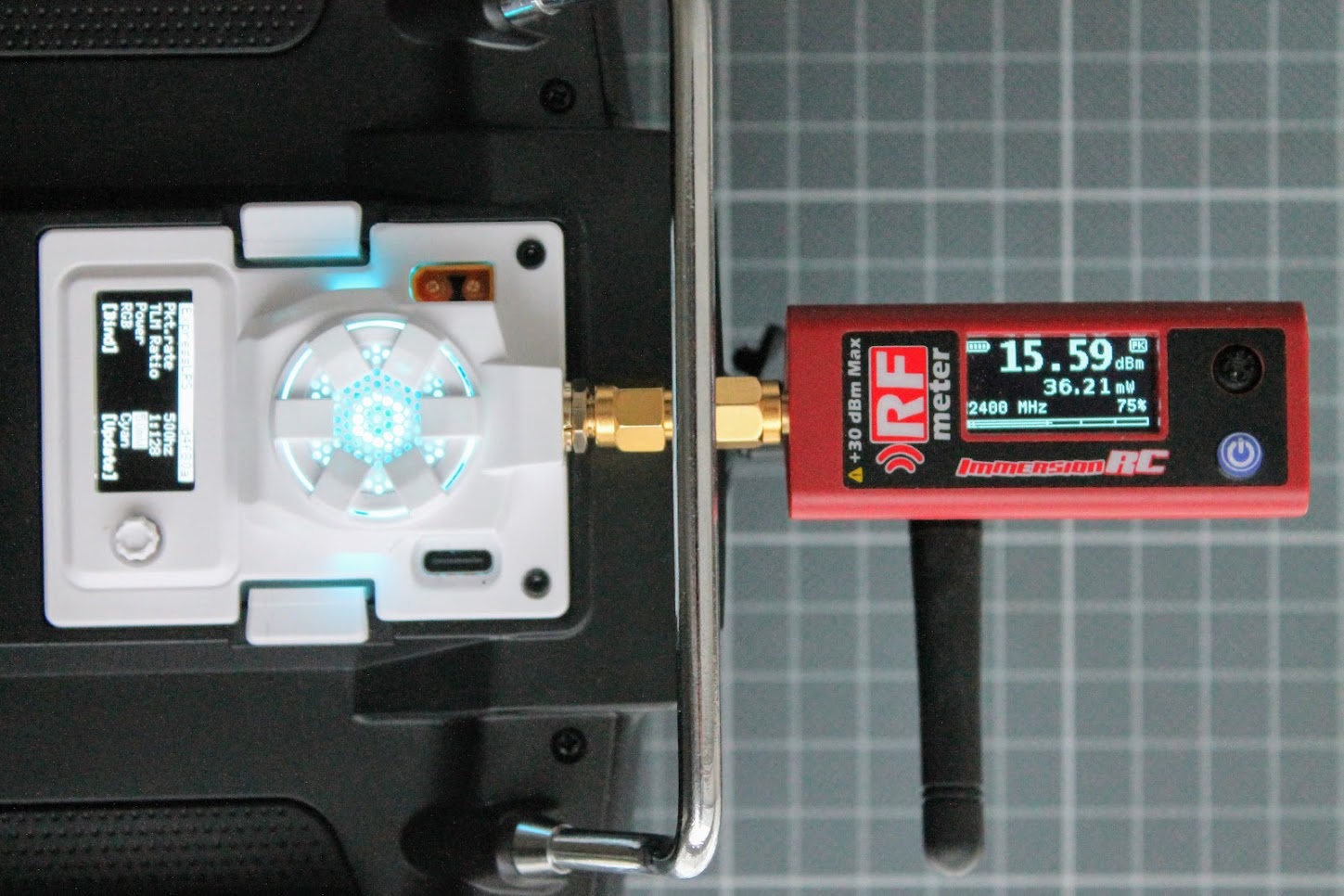 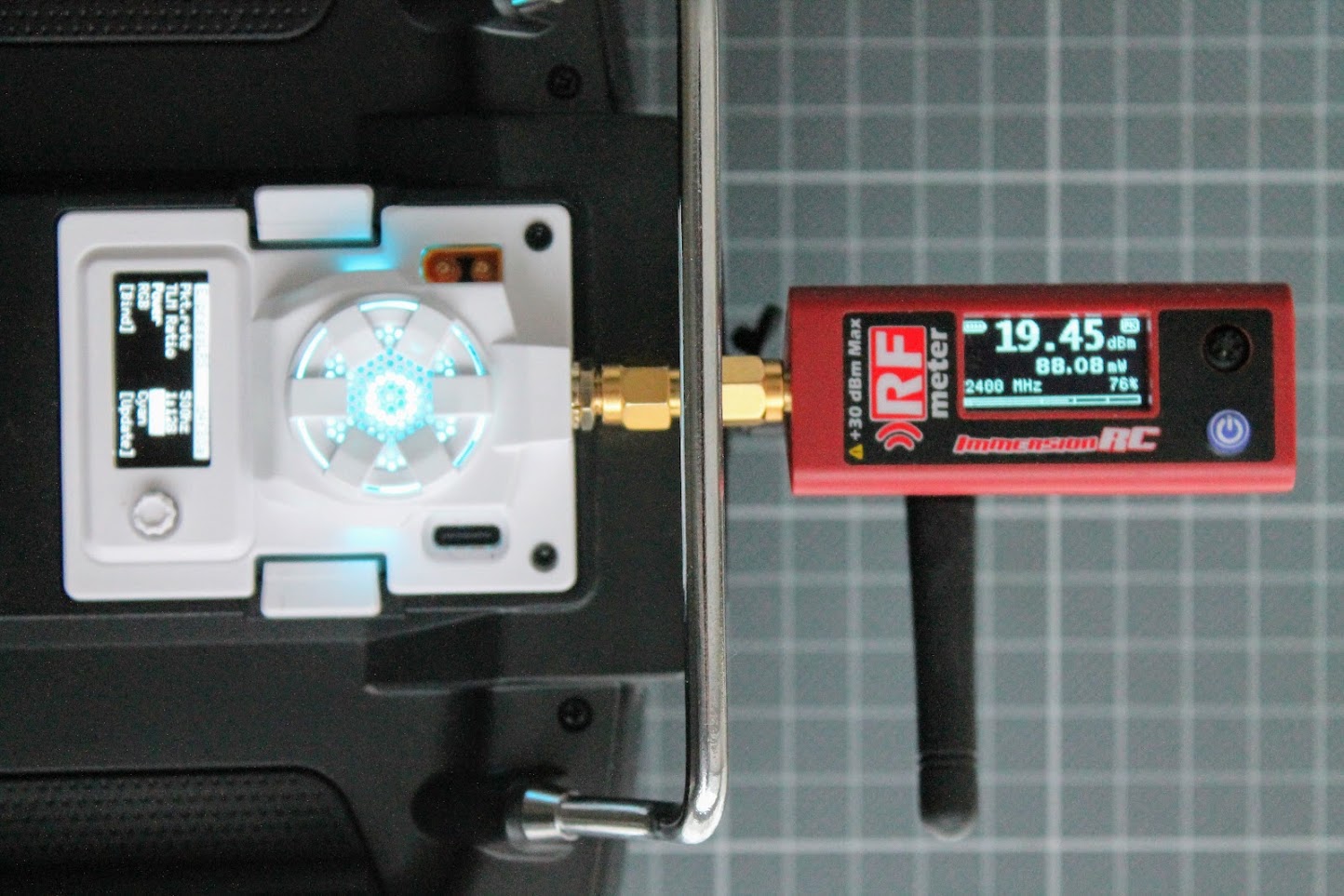 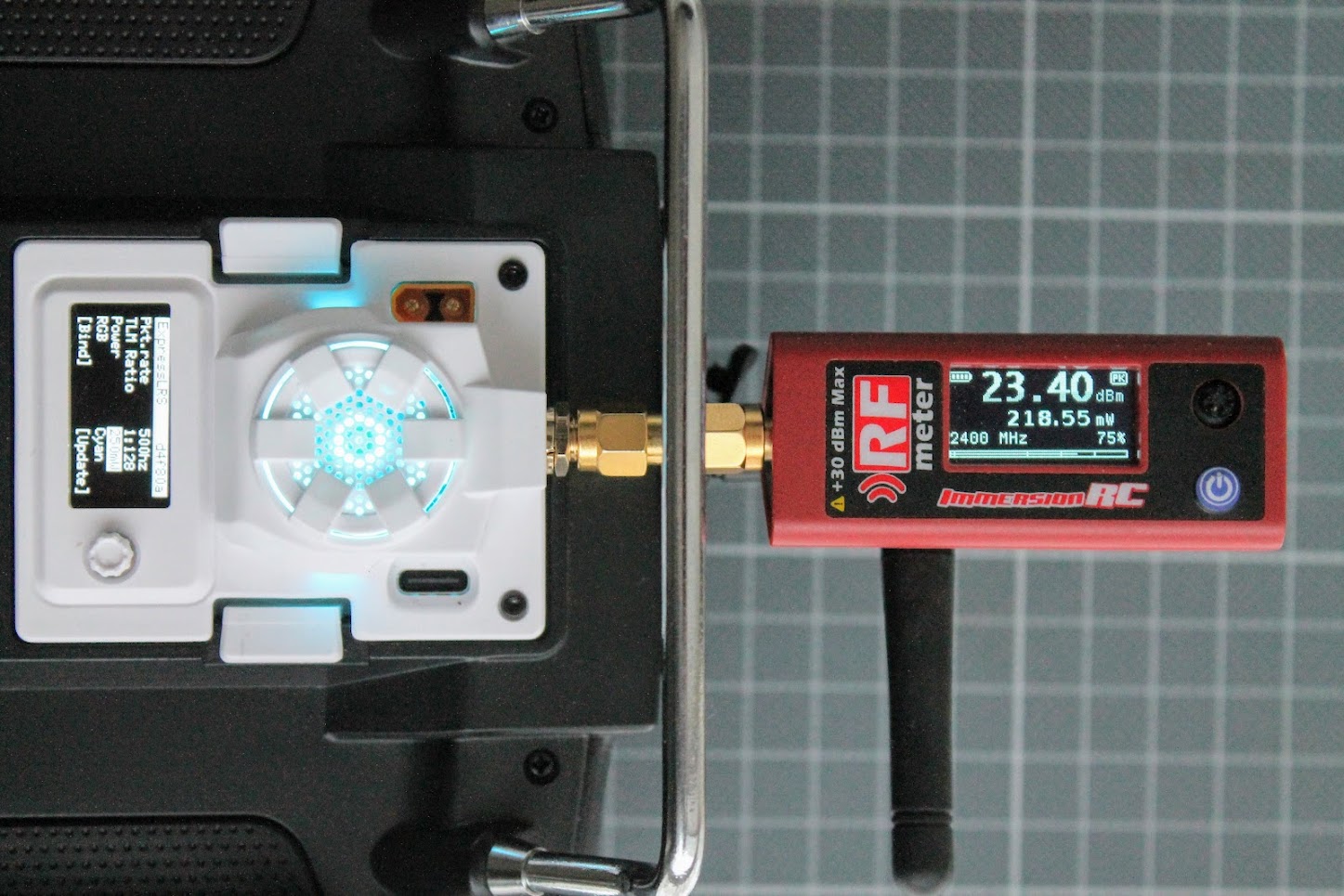 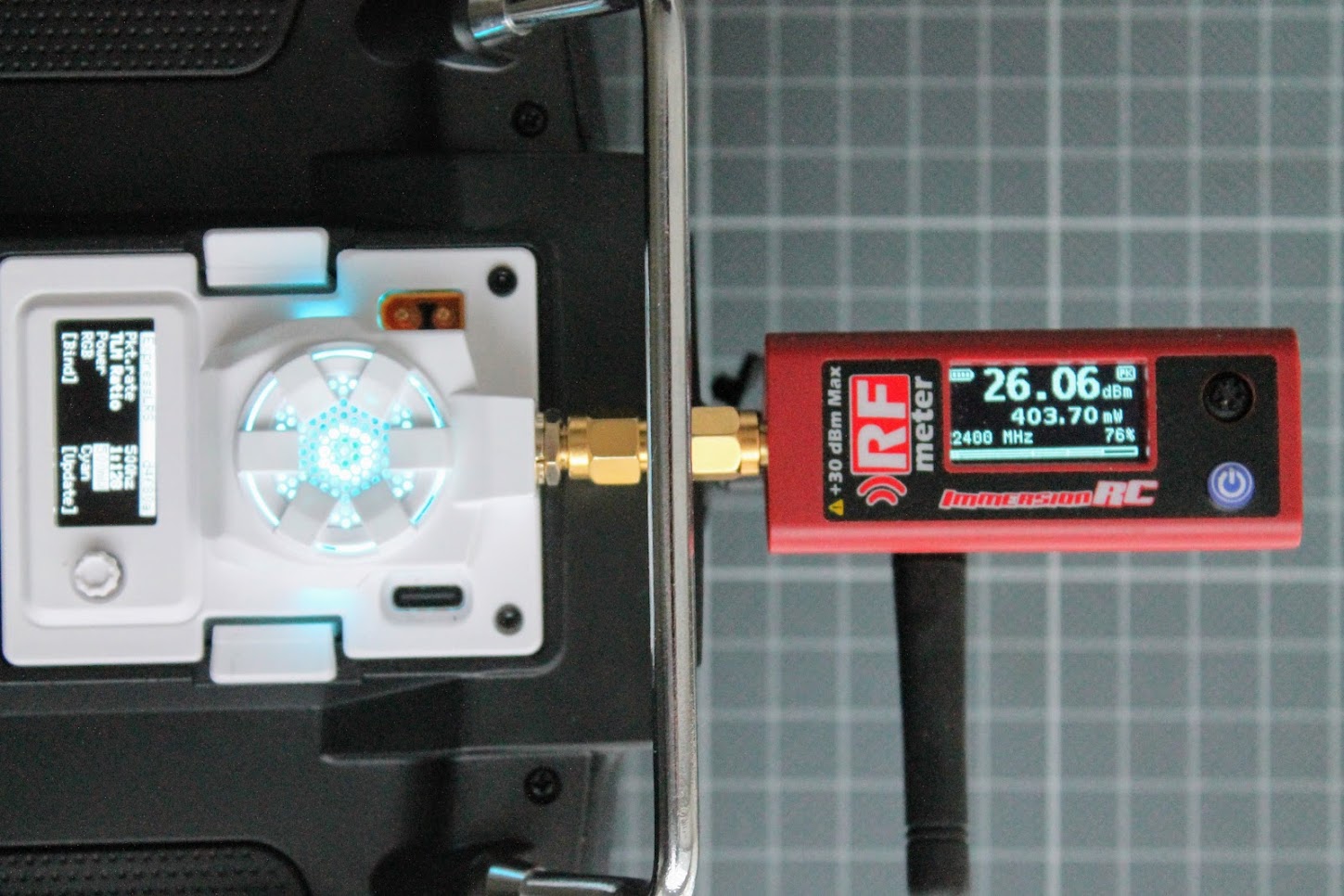 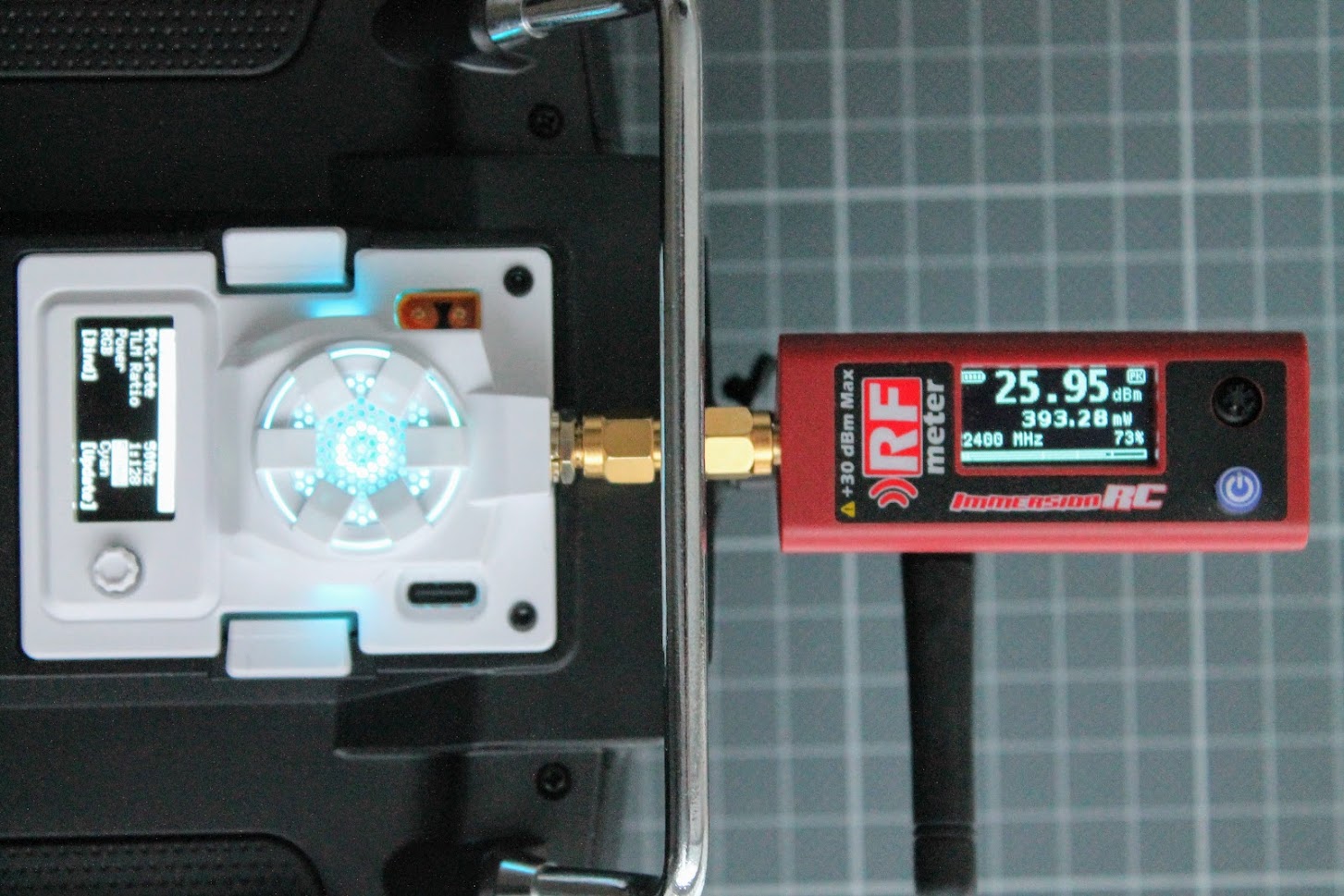 There are several known issues so far. BetaFPV has faced them, provided the feedback and is taking actions to fix them. Some of that issues are already fixed or at least explained in detail below.

Link is lost when entering the BetaFPV OLED menu

The moment when you enter the BetaFPV Micro TX OLED menu by long pressing the joystick button, RC link with the receiver is lost and this can lead to your aircraft to failsafe. It is expected to be fixed in the official ELRS version 2.1. Meanwhile there is an unofficial BetaFPV firmware with this issue fixed. Look for the “How to update (unofficial) ELRS firmware ” section below.

OLED screen is not supported in the ExpressLRS

5-way joystick for navigation is working as simple button. No up-down, left-right positions work. If you want to move through the menu, you need to long press the joystick like a button.

It is expected that the 5-way joystick  be supported in the official ELRS version 2.1. Meanwhile there is an unofficial BetaFPV firmware with full 5-way joystick support. Look for the “How to update (unofficial) ELRS firmware ” section below.

The USB port housing on the TX module is 6.2*11mm and may not fit with all the USB cables your own. A spare USB data cable (Type-A to Type-C) is included in the package for all order since November 18.

Firstly, we sincerely apologize for the compatibility issue of USB Type-C port housing and all the inconvenience it has brought you. When we started the industrial design of this Micro JR bay case, we wanted to make the part of the RGB LED large and noticeable, as shown in the prototype. However although we tried to increase the size of the USB Type-C port housing to 11*6.5mm to make sure it will be compatible with more USB Type-C cables, it turns out that the size is still not large enough for some USB Type-C cables. Really thanks for this feedback from @Jye Smith, Joshua Bardwell , @Don Johnson and @Oleg Stelmakh.
As you know, we really care about all of our customers’ opinions, thoughts, and experience of our products, as you all are like treasure that makes us become better. For anyone who has bought this module and not compatible with your own USB cable, we will send you a free USB Type-C cable that fits this module or a new version case with larger USB Type-C port housing space (13.5*6.5mm). (Please email our support team to claim for the cable or a new case: support@betafpv.com).
Why we choose 13.5*6.5mm for the upgrade version? This is the largest space on the case for this USB port housing now. Also, there are about 90% of the known USB Type-C cables compatible with this Micro module version. Besides, a spare USB Type-C cable is included in the package for every Micro module from now on.
Moreover, the new version Micro JR bay case (13.5*6.5mm USB port housing) will be sold separately and you can make your own TX module easily. At the same time, we also designed a 3D-printed case version for Micro TX Module to provide you with more choices . The STL file for this 3D-printed case is released and free to download on our website for the ones who want to modify their case.
Link to STL file:
https://support.betafpv.com/hc/en-us/articles/4409821458841

RF Chip on the back side of the module

Some users made a concern that RF chip is populated on the back side of the TX module PCB and can not be cooled properly.

BetaFPV response about RF module being on the back side and crystal capacitors:

We have received many reports from pilots telling us their concerns about the heat sink and loading capacitor.
Currently, the RF module is installed on the backside of the baseboard, this had led to many questions about whether the module can cool down and stay secure? The reason why we have installed the RF module on the backside of the mainboard is to have enough space for the RGB LED and the heat sink (only needed for the next 1W version). We have tested the temperature of this setup; With 500mW maximum RF output and 30 minutes powering on, the temperature of the RF chip can be kept under 50 degrees celsius and about 30 degrees for the case. It proves that the module can perform properly in daily use and need not to worry about the temperature. Also, for the black version (maximum 1W, upcoming in December), the temperature can be kept under 65 degrees, with a heat sink in our testing. Results are also showing that the temperature of the RGB LED would be 10 degrees higher for both 500mW and 1W RF module. This is the reason why the cooling fan component is needed in this situation.
There are also questions raised should the fan be blowing air inward or outward. Our testing results show that the only temperature difference would be shown on the JR case, as the electronic components inside remain unaffected.
On the F4 1S 5A FC (integrated SPI ELRS 2.4G receiver) prototype board, we have used a 20pF loading capacitor for the 52MHz oscillator. This will cause an unbinding issue with some modules. AlessandroAU and Jye Smith figured it out in the prototype board testing. Since then, we have changed it to 2-8pF and this loading capacitor value is suitable for this 52MHz oscillator in our testing. Hence, now all of the ELRS 2.4G products from BETAFPV come with a 2-8pF loading capacitor and should be compatible will all the ELRS items in the market.
There is also a comparison made between the BETAFPV and other brands, on the use of loading capacitors on the Crystal Oscillator(CO) circuit. Currently on the market, many have removed the loading capacitors on their modules. In our case, we have chosen to use it due to the specification and layout of the CO which our module has. The normal CO is 2.0×1.6mm(2016), and BETAFPV’S ELRS products used a 3.2×2.5mm(3225)CO, which is bigger in size. Use the BETAFPV Lite receiver for example. When there are no loading capacitors included, the 52MHz crystal error value is 16PPM. When 2.2pF loading capacitors included, the error value would be 2.25PPM, more closed to the 52MHz value we needed. After repetitive testing, we came to the conclusion that the TX can correctly performs when the frequency error of 52MHz oscillator is lower than 40PPM, which we have successfully maintained. Ensuring the properly functioning of theSX1280 RF system.
Planning for the future, in order to achieve a better frequency precision and compatibility, we will decide whether to keep the CO or modify the capacitor under the circumstances of the specification, layout and temperature drift of the crystal oscillator in our later released products.

How to update (unofficial) ELRS firmware

Until the BetaFPV Micro TX is supported by official ExpressLRS branch, you need to download the source code of master-betafpv-oled-menu branch to local disk from BetaFPV Github (https://github.com/BETAFPV/ExpressLRS).

Press the button [Code] and select the “Download ZIP“. 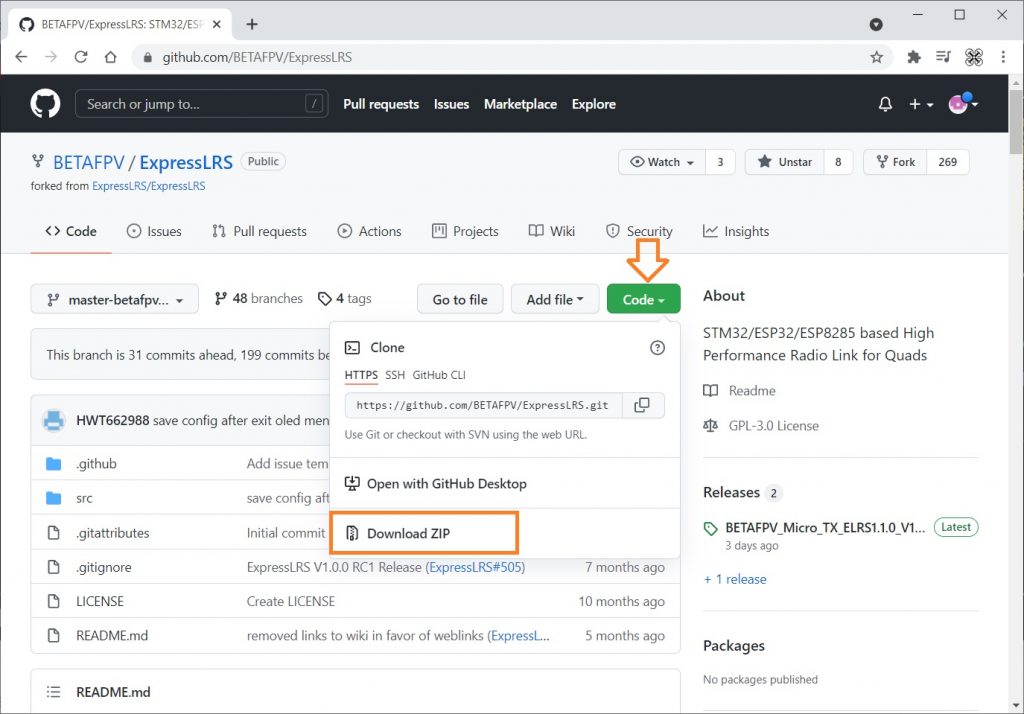 Unzip the downloaded source code to some local folder.

Open the ExpressLRS Configurator and select the [Local] tab and then navigate to the \src\ folder  in “Local path setting” . Select the target device “BETAFPV 900/2400 TX Micro”. From that point, you can setup your own binding phrase and other options as usual flashing method. Read more on updating the ExpressLRS firmware here: ExpressLRS – Complete Guide. 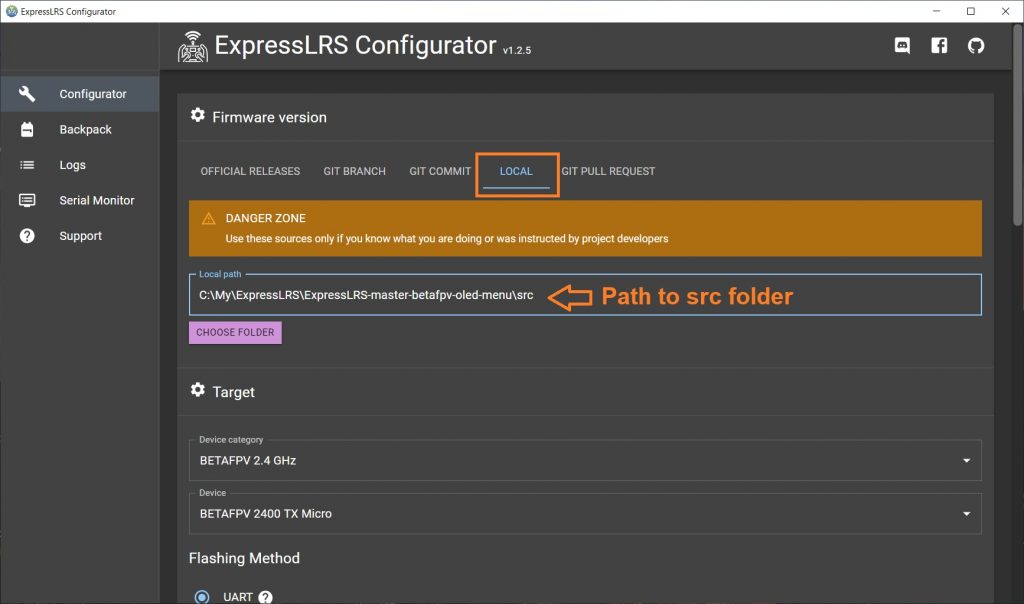 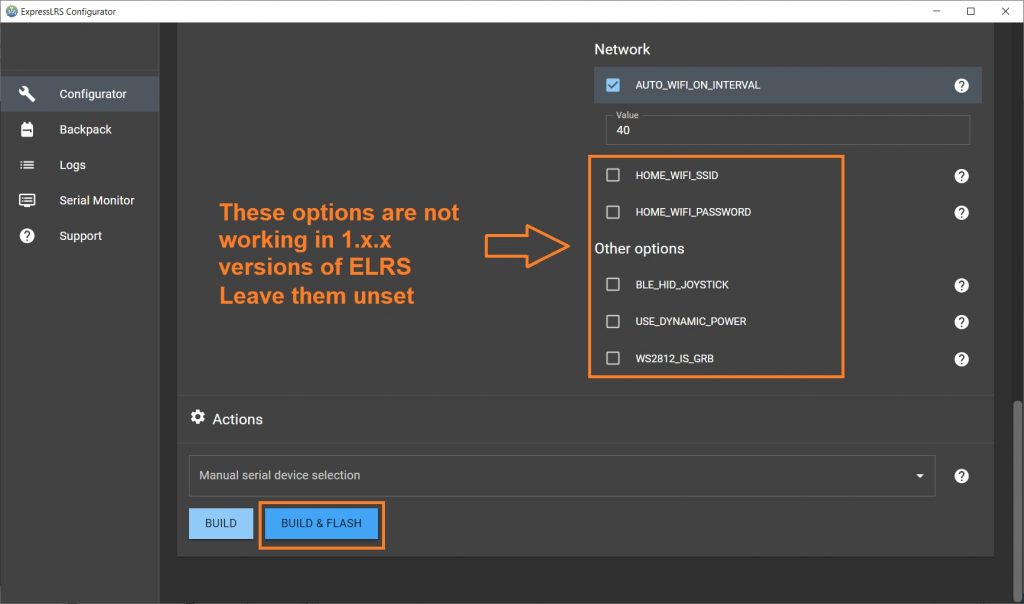 And wait for the module to be flashed successfully. 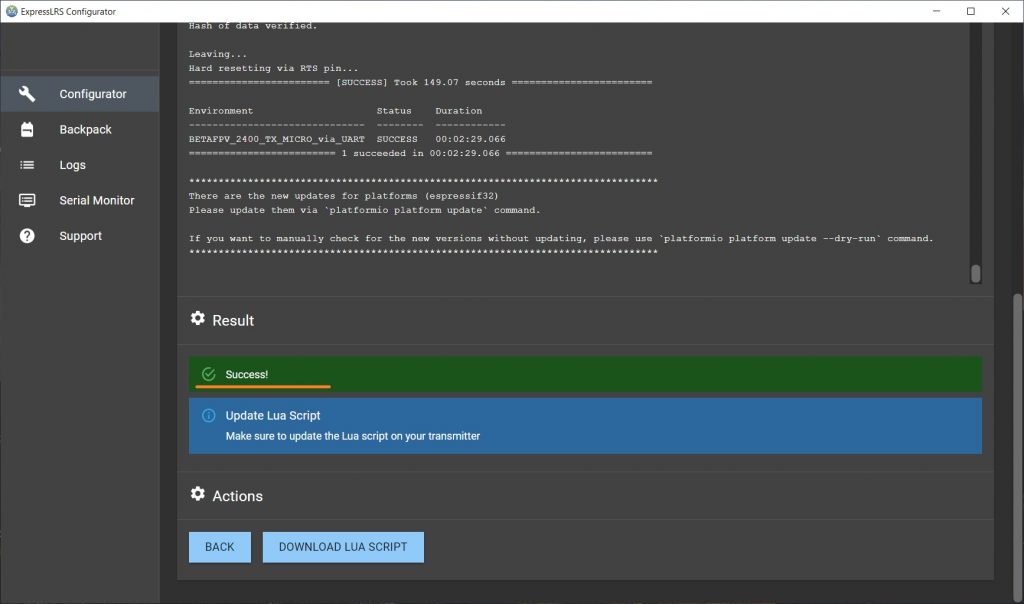 BetaFPV ELRS Micro TX module was the first module to introduce the OLED screen and 5-way joystick for navigation. Being first means you are doing something new and most probably mistakes too. This module was no exception. BetaFPV hurried to release this module and made a few mistakes. 5-way joystick was implemented as simple button, entering the module menu failsafed the aircraft. Some USB cables does not fit into the slot and overall module design. These mistakes are fixed now.

Comparing the similar ELRS TX modules with the similar price tag on the market, BetaFPV Micro TX has a few advantages – OLED screen, joystick navigation, up to 500mW RF output, possibility to use on non OpenTX radios.

I do like the possibility to set the settings via joystick and the LUA script. The output power of the 500mW is more than enough for almost any pilot and any aircraft – ELRS can go tens of kilometers on the 100mW.

Once the BetaFPV Micro TX ELRS module is fully supported by the official ExpressLRS code (scheduled for version 2.1), this will be the great choice of ELRS TX module. The only thing I’m missing in this module is ESP backpack feature.

Disclaimer: This item was supplied by BetaFPV for a fair and unbiased review. BetaFPV never asked for a positive review and never influenced my opinion in any way. I’m trying my best to stay uninfluenced and give only my own, honest and as much as possible unbiased opinion. All affiliate links, if there are any, help me purchase items for future reviews and tests.