Eachine TX806 Leaf VTX has 9 bands A, b, E, F, r, U, o, L, H,  72 total channels (including illegal channels 4, 7 and 8 on the band E, according to the FCC regulations), 5 power levels 25mW/200mW/400mW/800mW/1000mW (actual power output below) and PitMode, SmartAudio for controlling the VTX settings remotely via Betaflight OSD. Eachine TX806 also has microphone on board for broadcasting audio together with video feed. TX806 can be mounted in the stack as its two holes are aligned exactly to the FC stack opposite corners. VTX has MMCX antenna connector which is superiour to small IPEX connector. 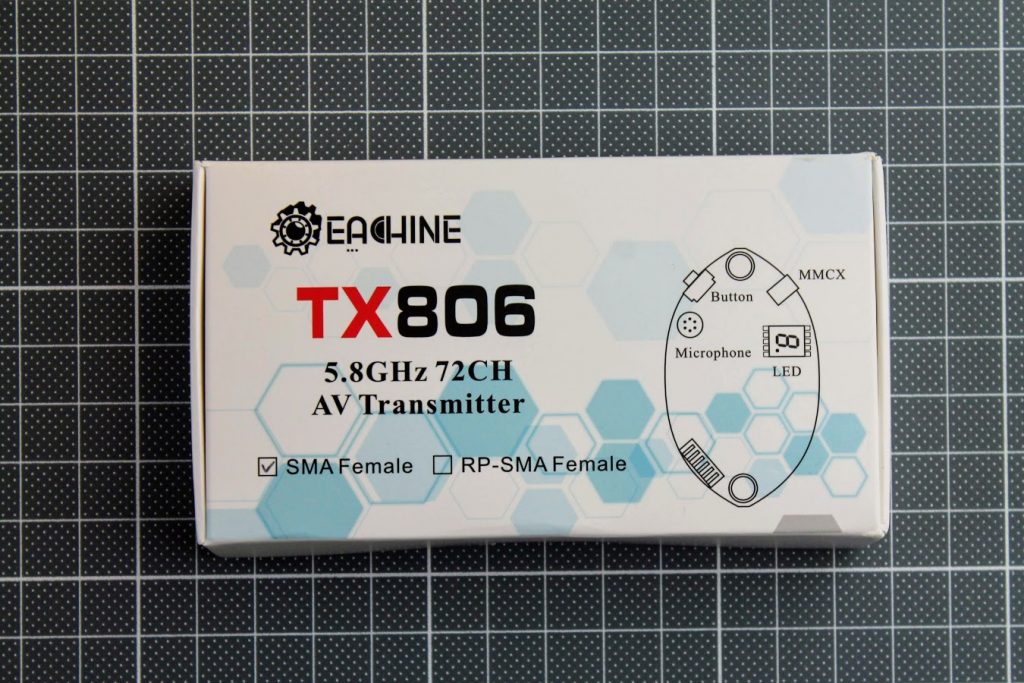 TX806 comes with a VTX, MMCX linear dipole antenna, MMCX to RP-SMA or SMA adapter pigtail (can be selected on purchase), cable with 6pin 1.0mm JST-SH plug and a small instructions leaflet. 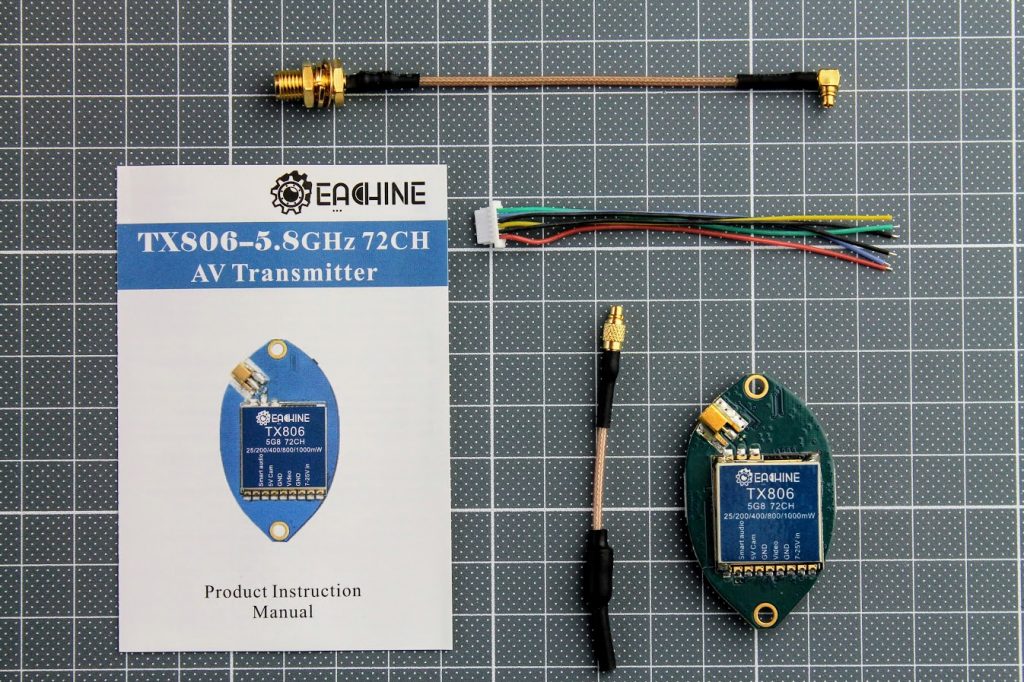 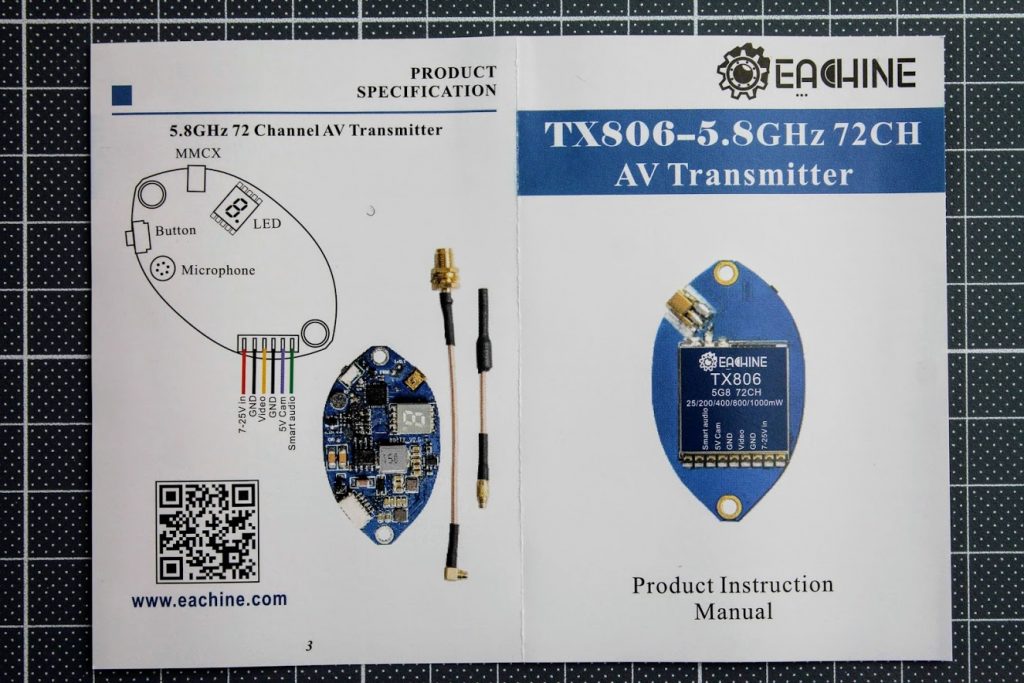 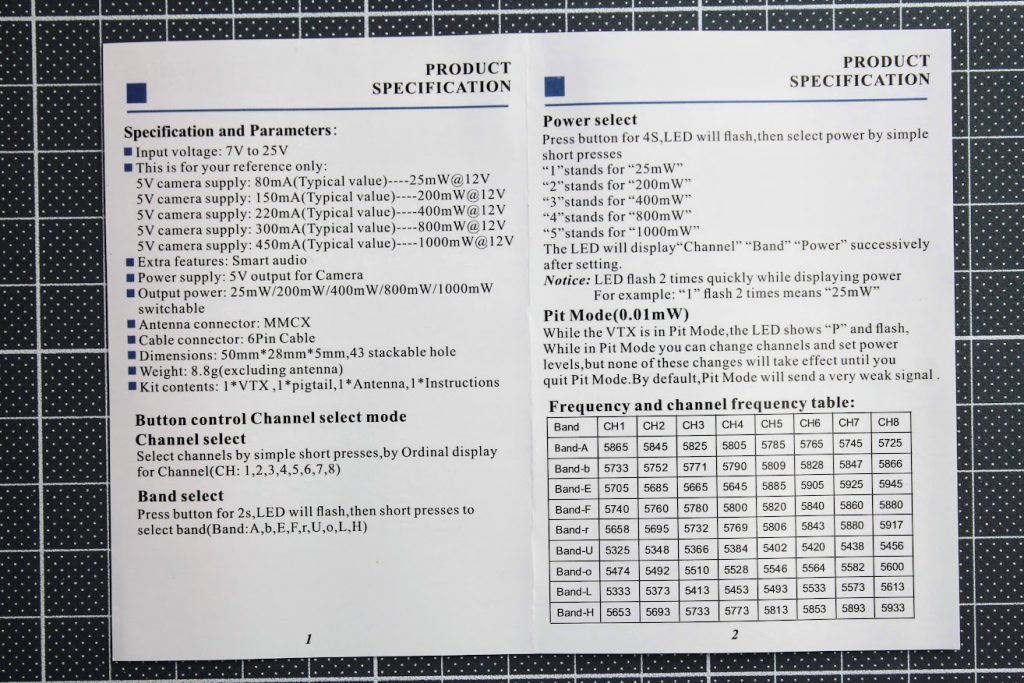 Eachine TX806 has MMCX antenna connector, installed at the 45 deg angle. It will start making sense after you’ll see how it can be mounted in the stack. 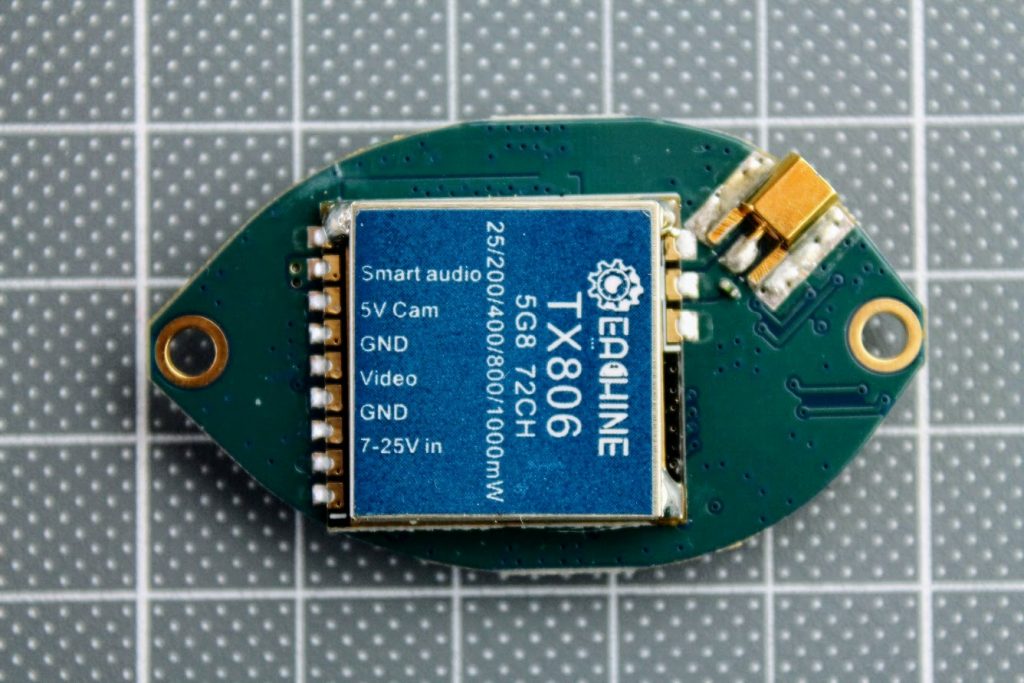 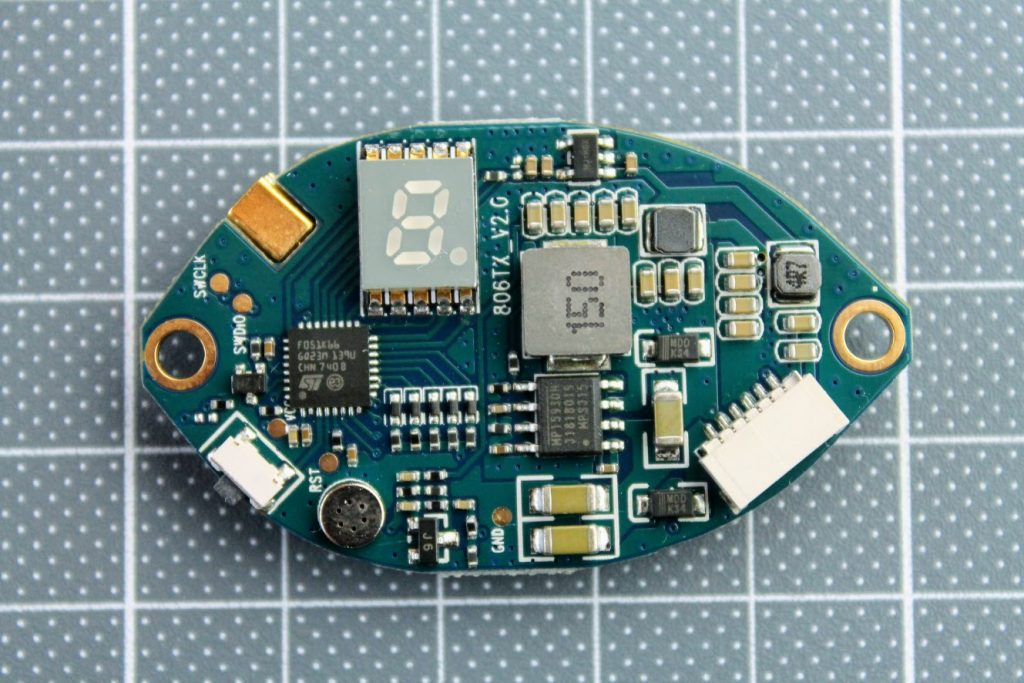 Actually it looks very similar to a leaf 🙂 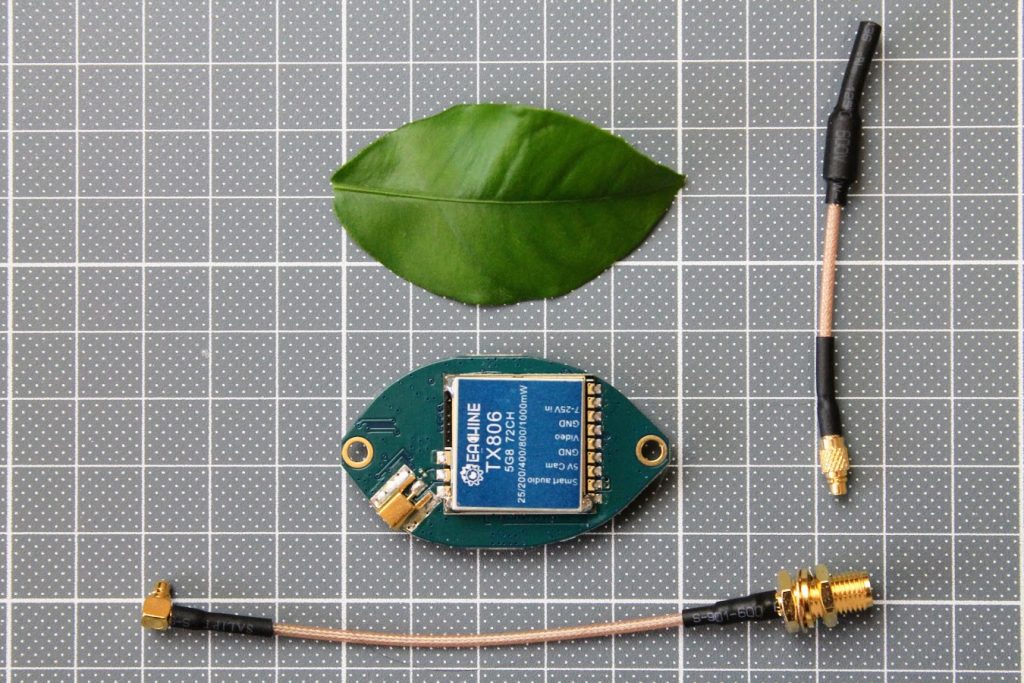 The weight of this VTX is 8.7 grams without wires. 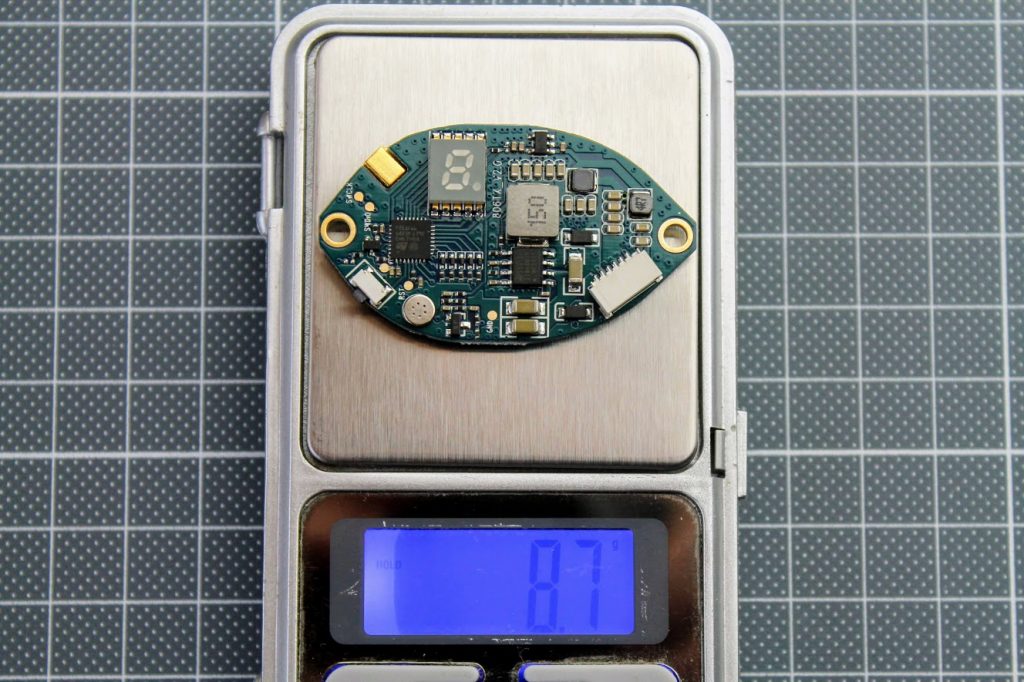 VTX weight with cables and dipole antenna is 10.8 grams 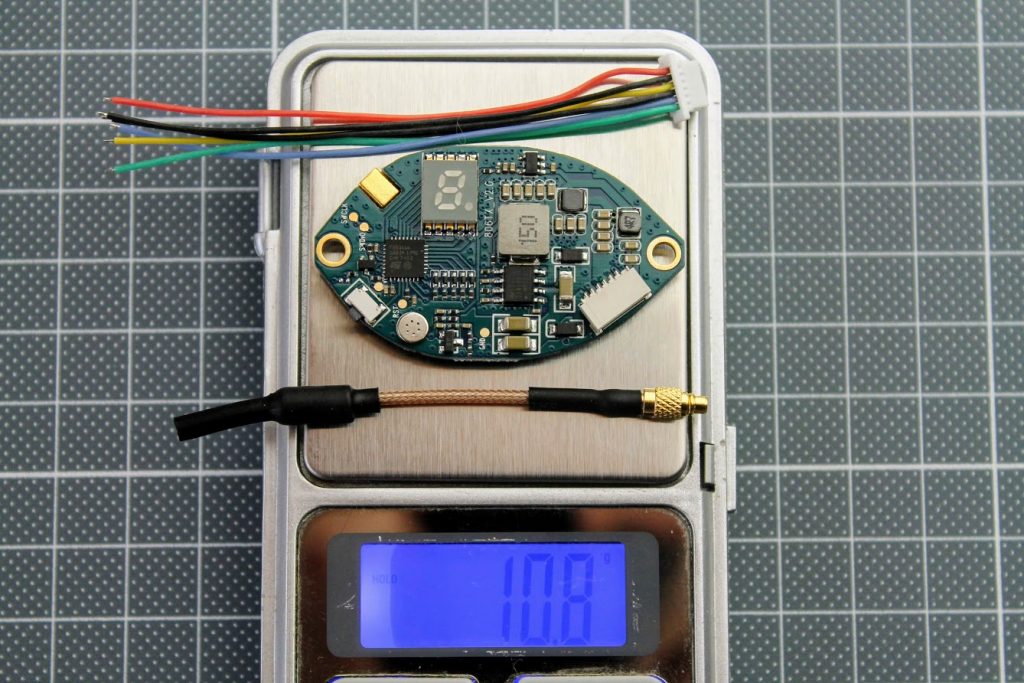 VTX weight with cables and antenna pigtail is 13.8 grams 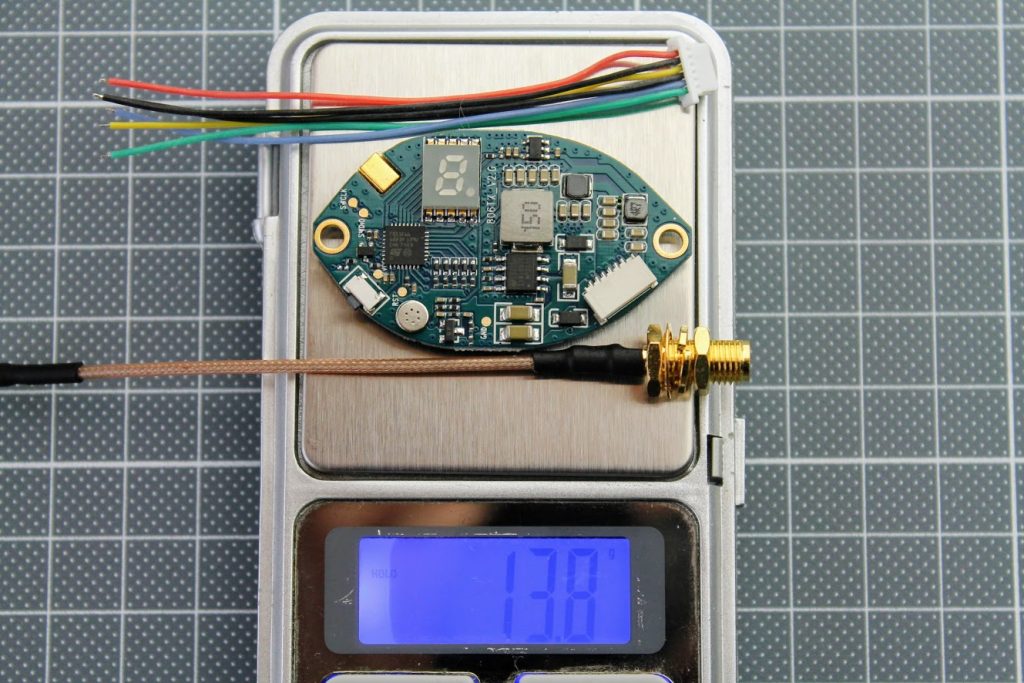 Eachine TX806 can be mounted on the stack – two holes align diagonaly with stack opposite corners. 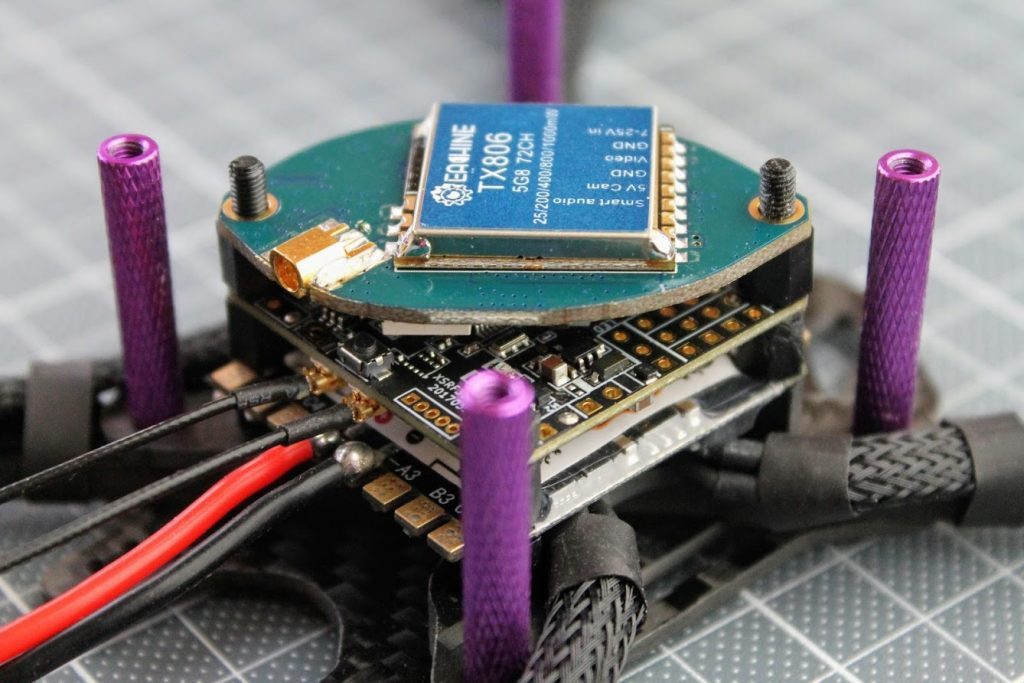 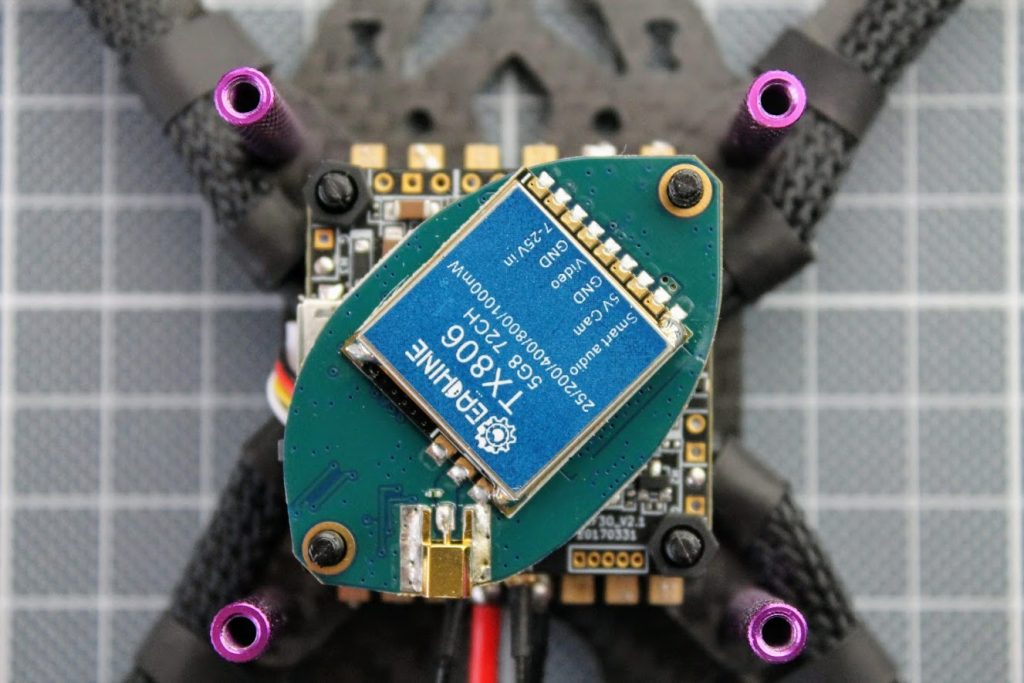 So you can easily fit it into the quad if you have enought height for your stack. Next: lets check the VTX power output.

Eachine TX806 was connected to the RF power meter via supplied MMCX pigtail. VTX was actively cooled with fan while taking the measurements. Also current consumptions were measured for each power output level. RF power output tests were made on A band, 1 channel (5865 MHz). 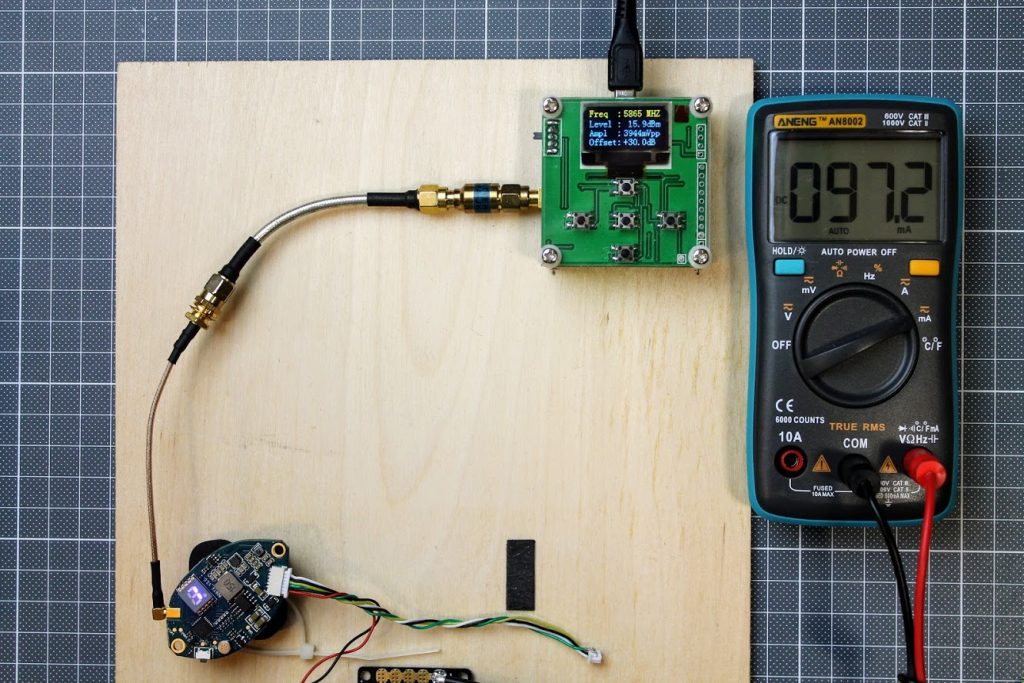 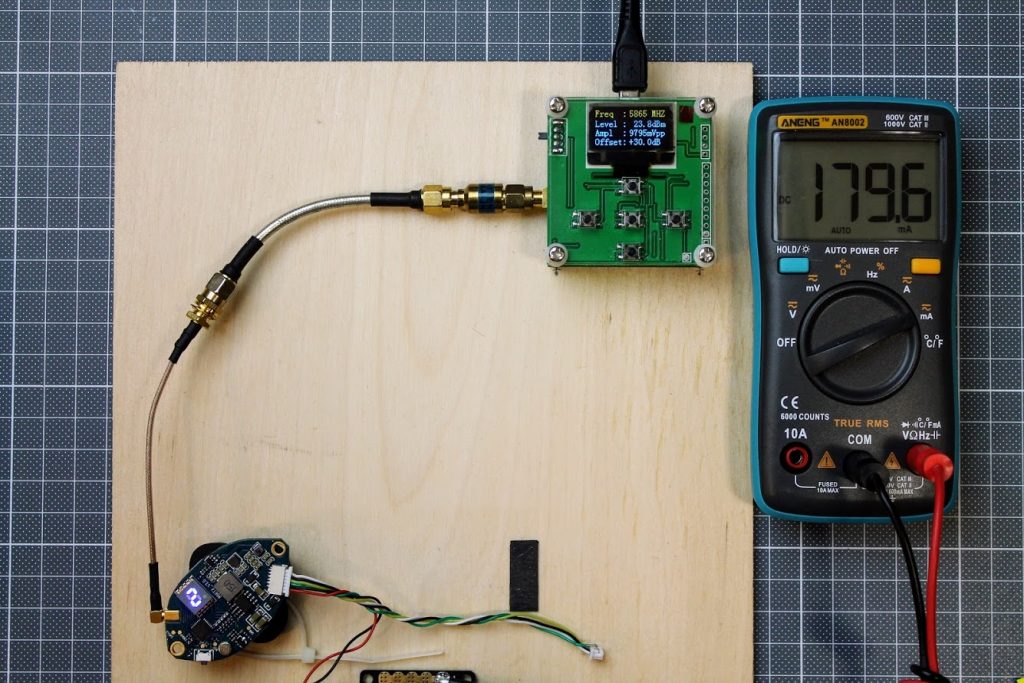 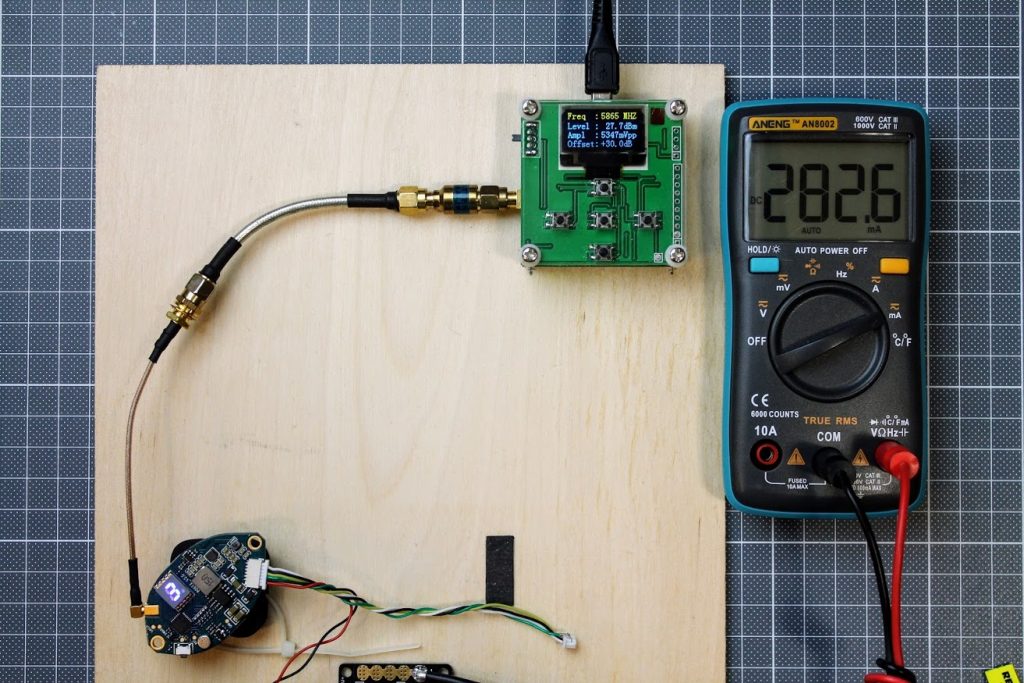 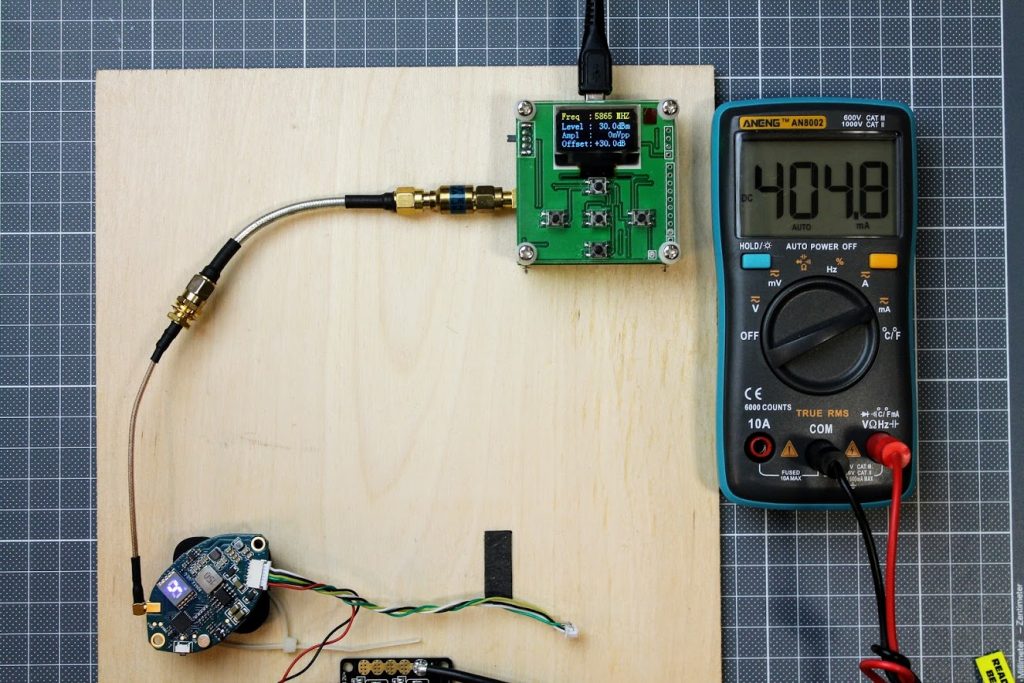 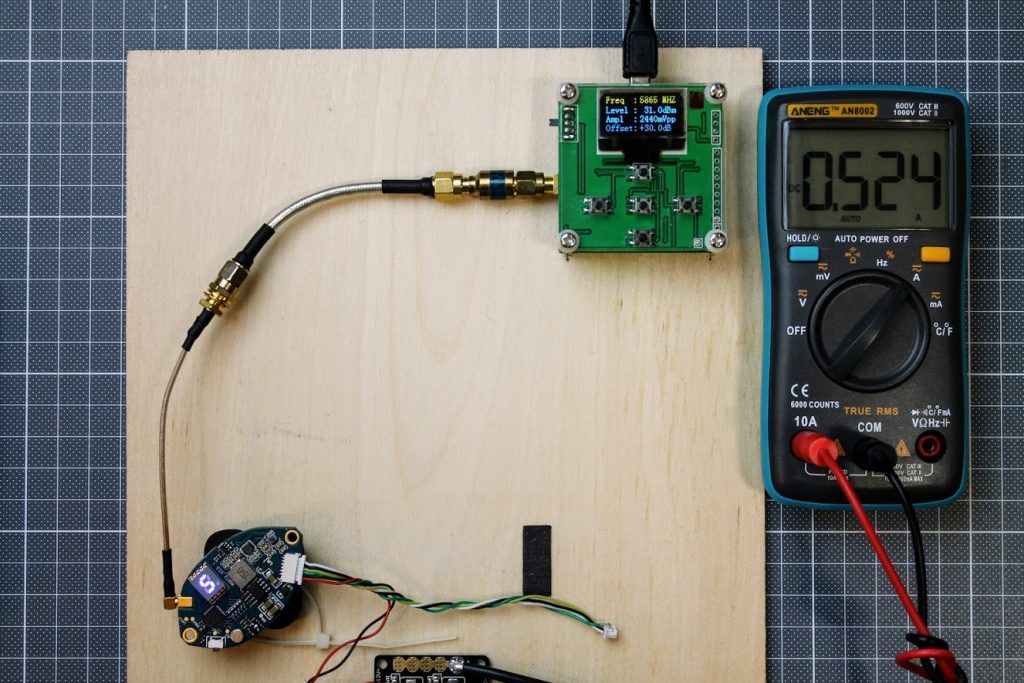 RF Power output drops drastically on some VTX’s when they heat up without the active cooling. So I have tested how the heating up affects the power output on TX806. 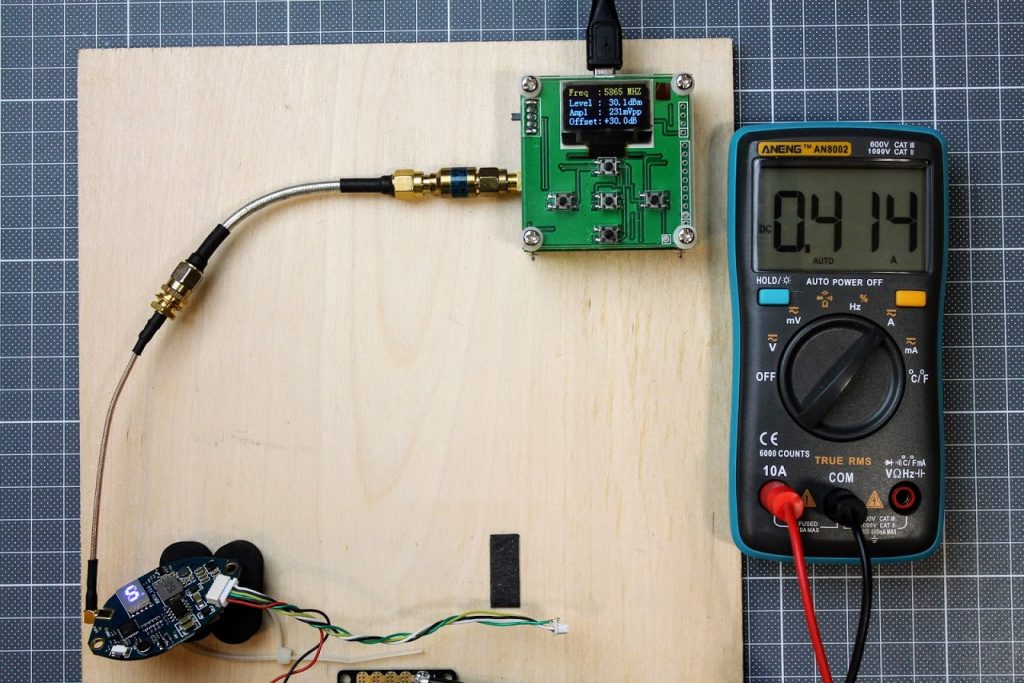 And to my surprise Eachine TX806 is outputting even slightly more than 1000mW after the 5 mins of operating without any active cooling. VTX has got extremely hot, but the power output remained solid.

Power tests show that TX806 VTX is calibrated to slightly outperform the power output setting – on 25mW power setting it exceeds the declared output and transmitts outputting 39mW. Also this VTX outputs more than nominal setting on all the other power levels.
(Compare with the results I’ve got while testing Eachine TX805: Review: Eachine TX805 VTX )

Here are the measurements table and the graph of the TX806 power output test: 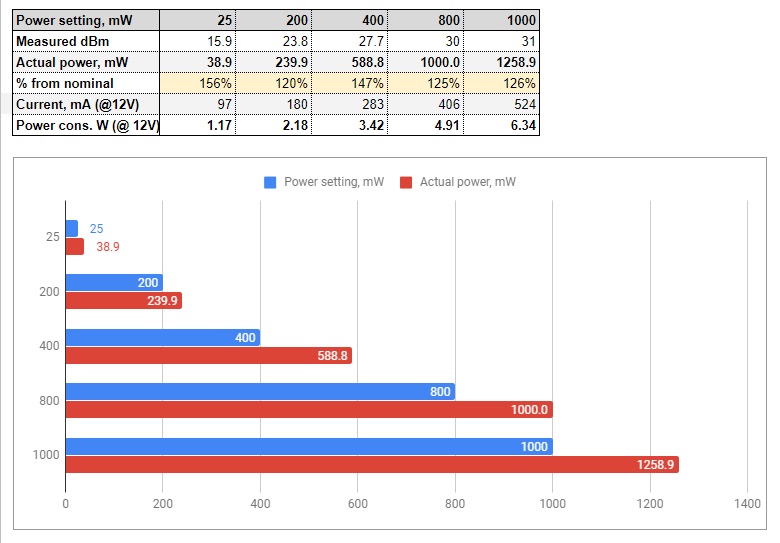 Blue bar is expected value and the red bar is real power output.

Power output linearity on the Raceband channels with 25mW setting: 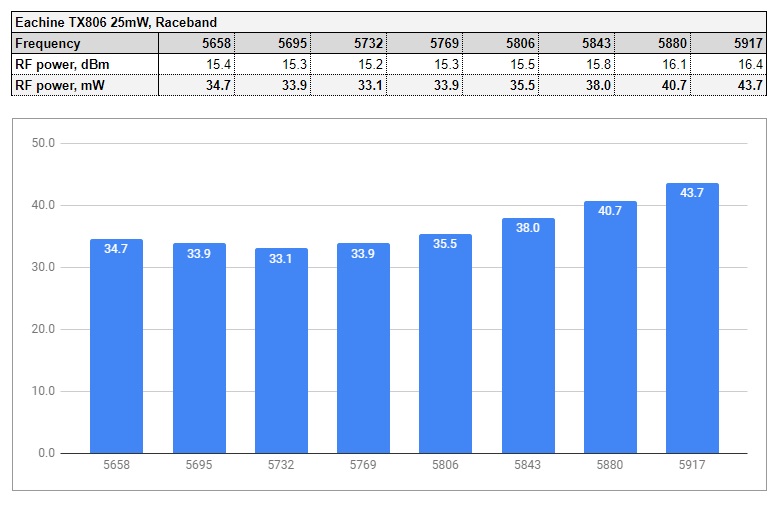 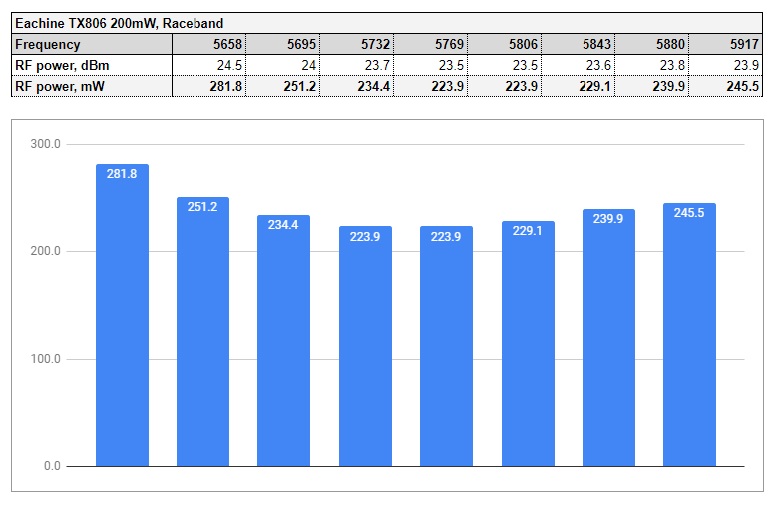 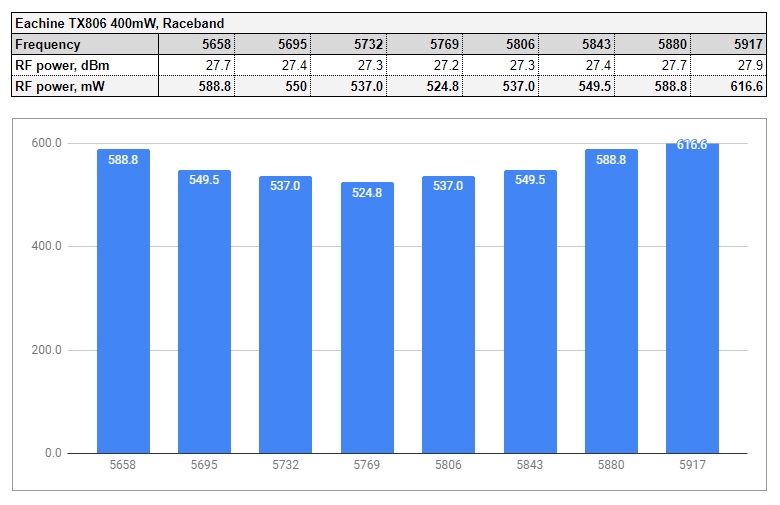 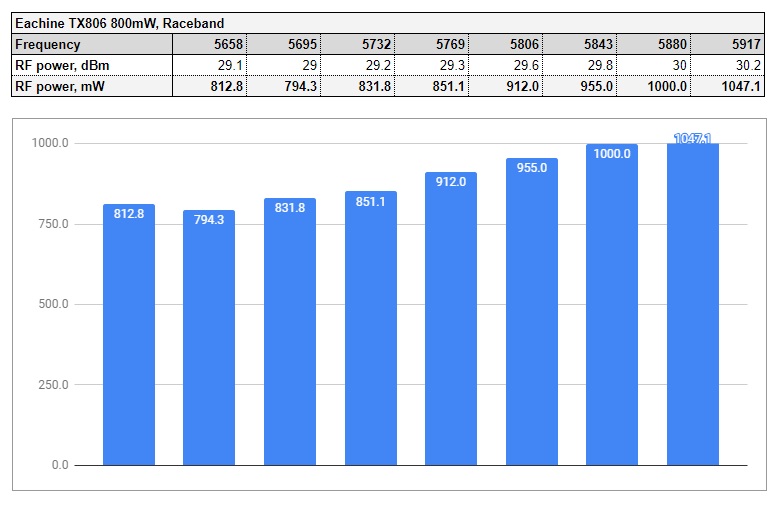 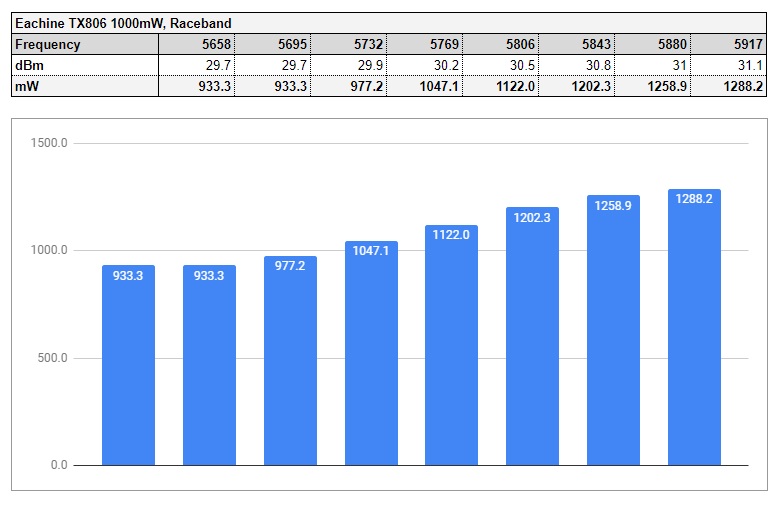 Eachine TX806 has unusual design – it resembles the leaf. This design makes this VTX bulky, but TX806 can be easily mounted in the standart stack. Eachine TX806 has all the required features for a modern VTX: audio microphone on board, MMCX antenna connector, SmartAudio control, 72 channels and 6 switchable output power modes – Pit/25/200/400/800/1000mW. However output power does not correspond the to expected values. At the 25mW mode it outputs 39mW, at200mW – outputs 417mW, while at 800mW it outputs less than on 600mW setting – only 598mW. On the race events you probably will be asked to turn your quad off after the VTX power measurements – you cannot exceed the 25mW requirements. On the other hand the hunters for the long range should be delighted to find out that this VTX actually outputs marginally more than expected even on the highest power setting. On the 1000mW setting it can transmitting whole 1288mW (Raceband, CH8). If you are comfortable with these RF power level deviations, then TX806 can be good candidate for VTX on your quad or fixed wing.

To be tested: Audio feed from microphone, SmartAudio feature.

Disclaimer: This item was supplied by Banggood for a fair and unbiased review. Banggood never asked for a positive review and never infuenced my opinion in any way. I’m trying my best to stay uninfluenced and give only my own opinion. All affiliate links if there are any help me purchase items for future reviews.