BetaFPV M03 VTX is the updated version of their M01 VTX. The earlier version had one fixed 25mW power output level. The new M03 VTX is outputting from 25mW up to 350mW. Lets take a look at this VTX.

BetaFPV M03 VTX package contains M03 VTX, with linear antenna and 5 silicone wires for soldering this VTX to the FC. 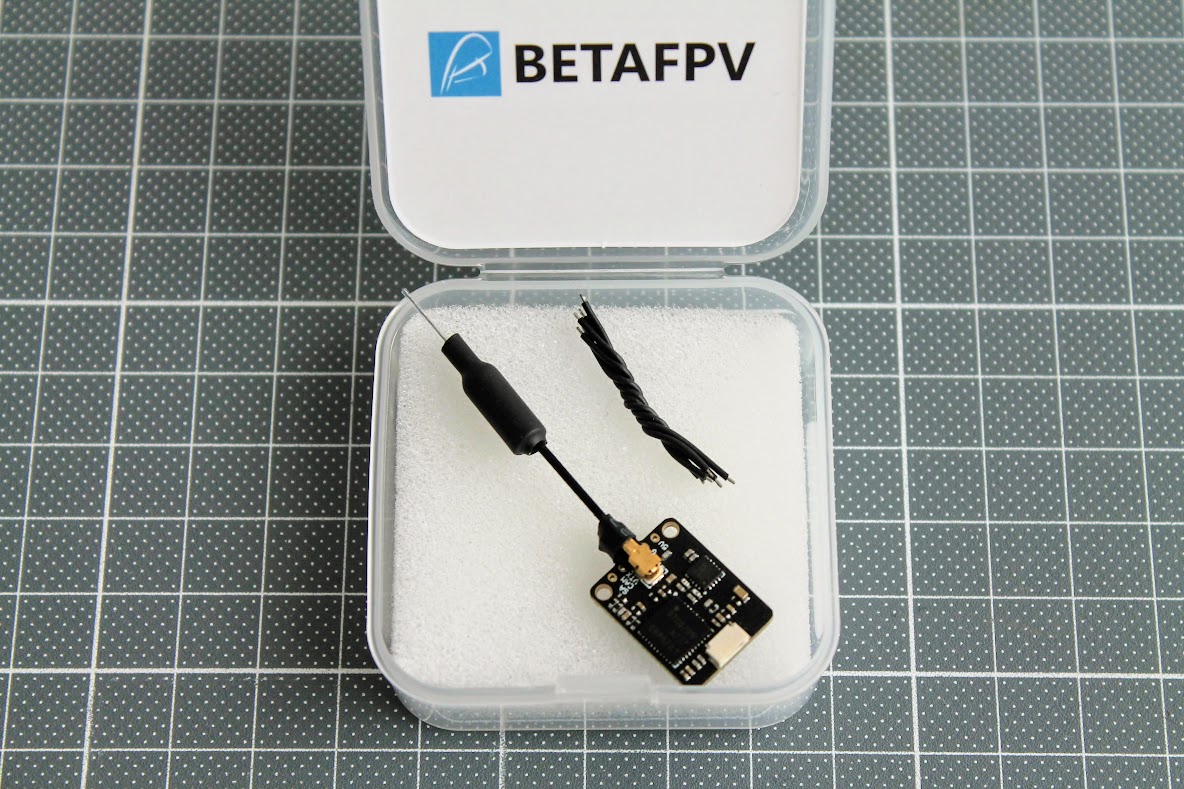 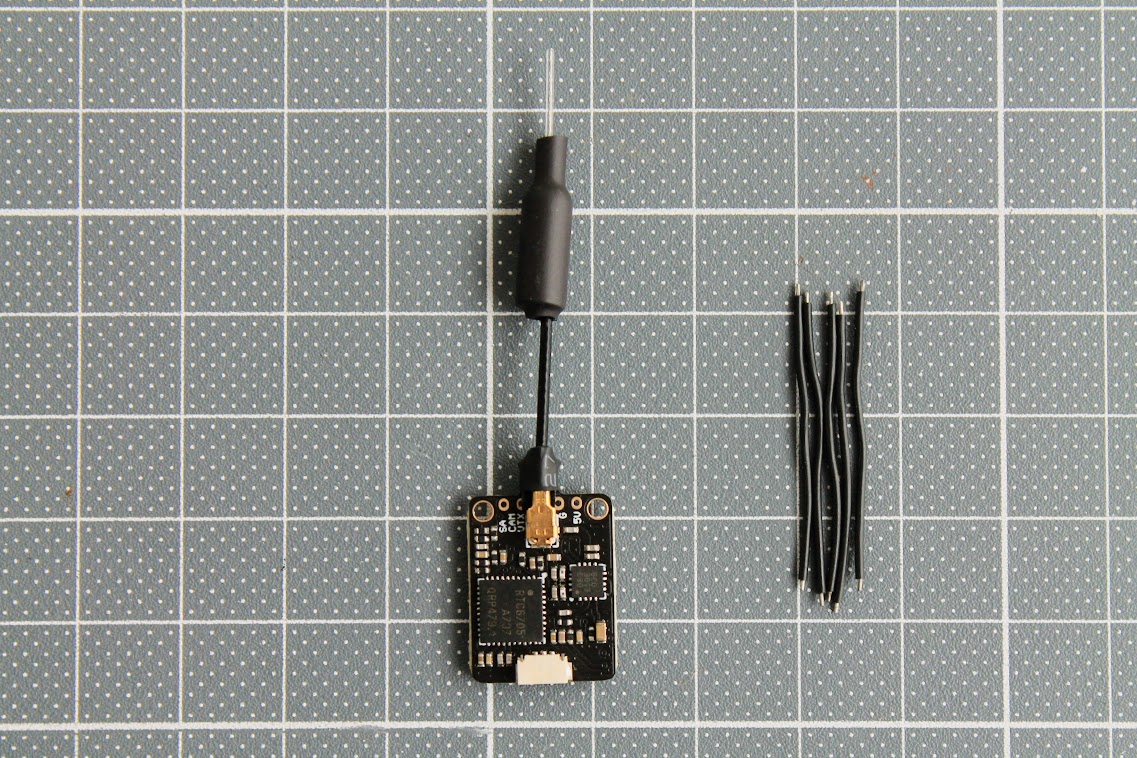 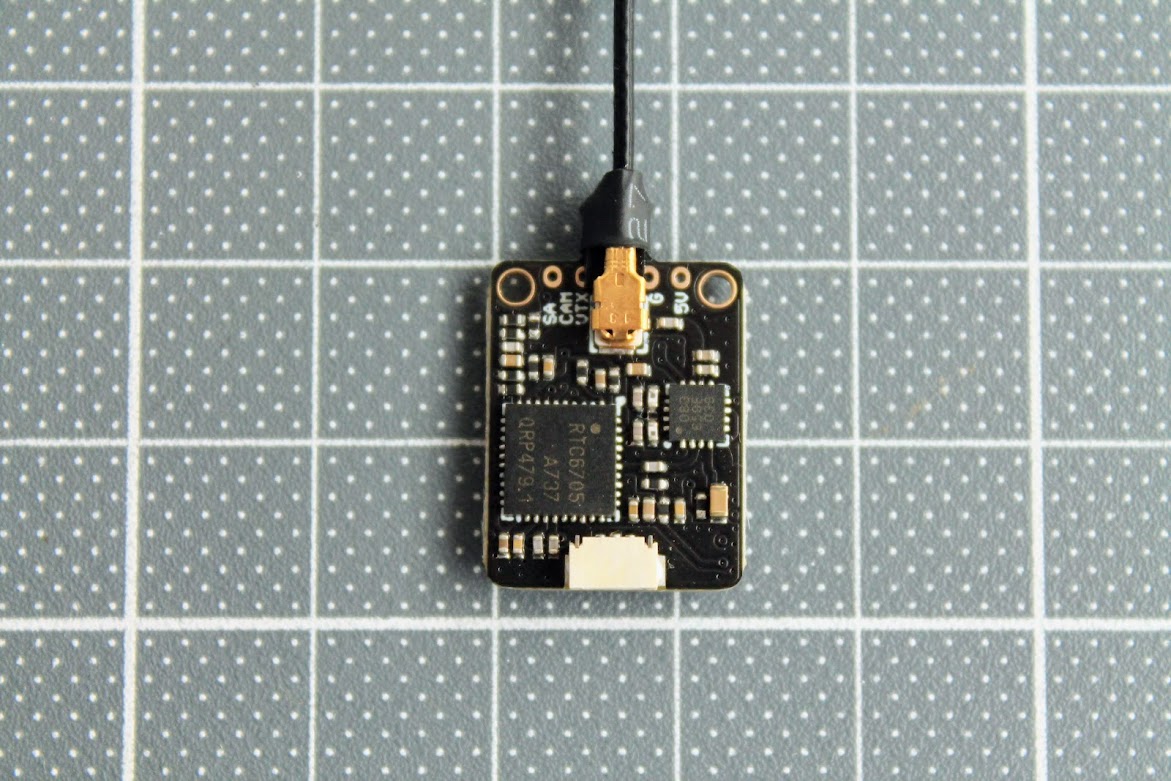 On the bottom side you can find the push button for setting the power output level and the LED for power level output indication. 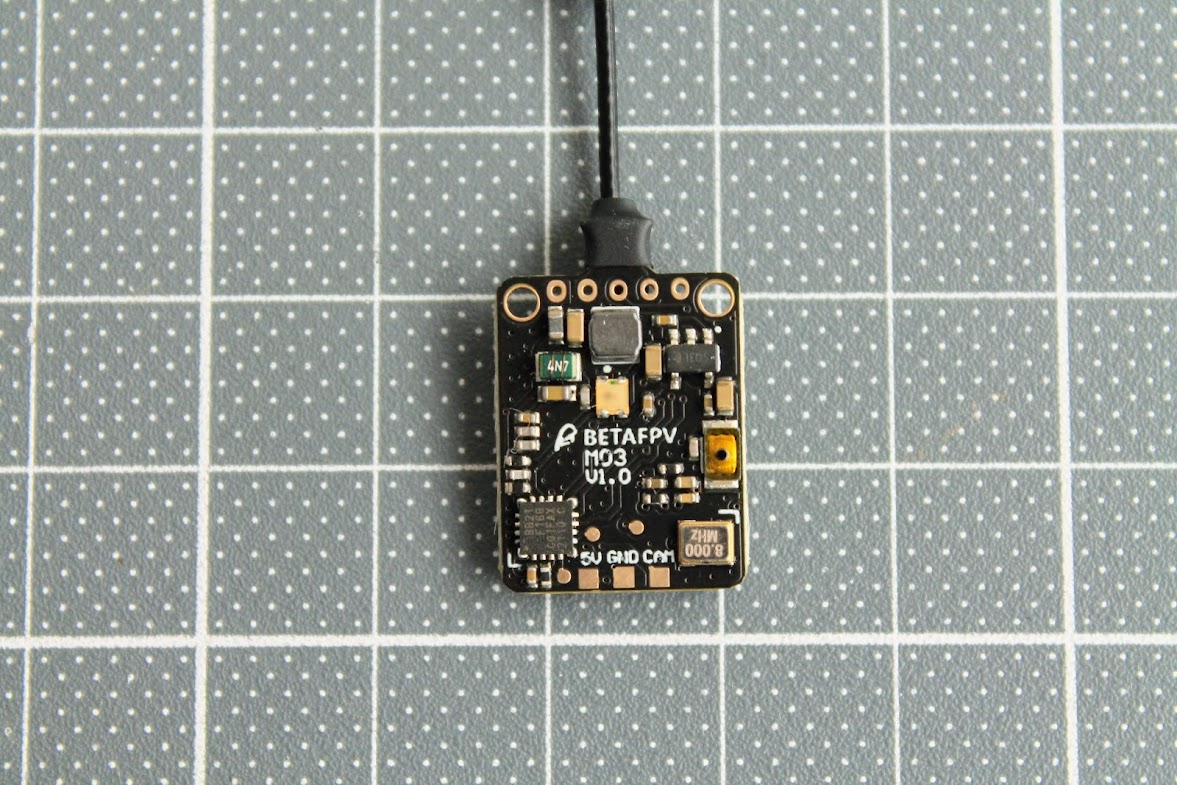 M03 VTX has JST-0.8 connector socket that is direct plug in compatible with BETAFPV C01 (discontinued), BETAFPV C02 and NewBeeDrone BeeEye cameras that have such connector preinstalled. There is also solder pads for soldering the camera vires directly to the VTX. 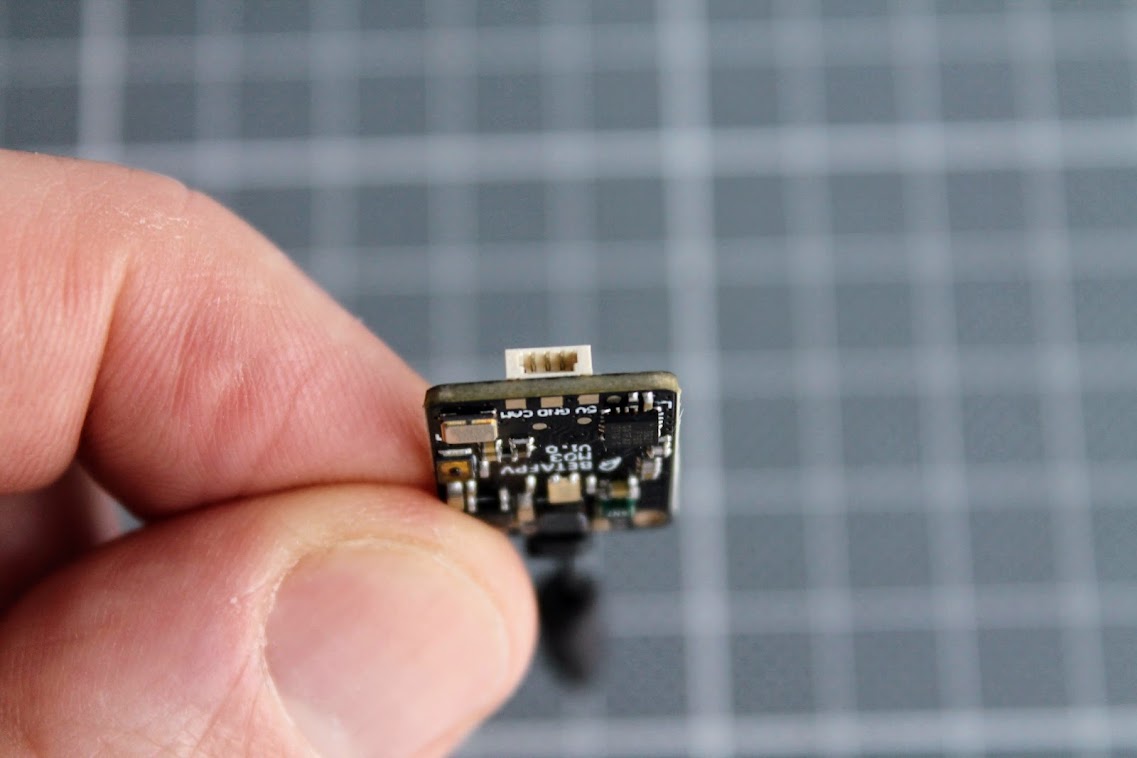 There is a spacer between the antenna and the PCB an the antenna is fixed to the the PCB with small piece of the heat shrink. 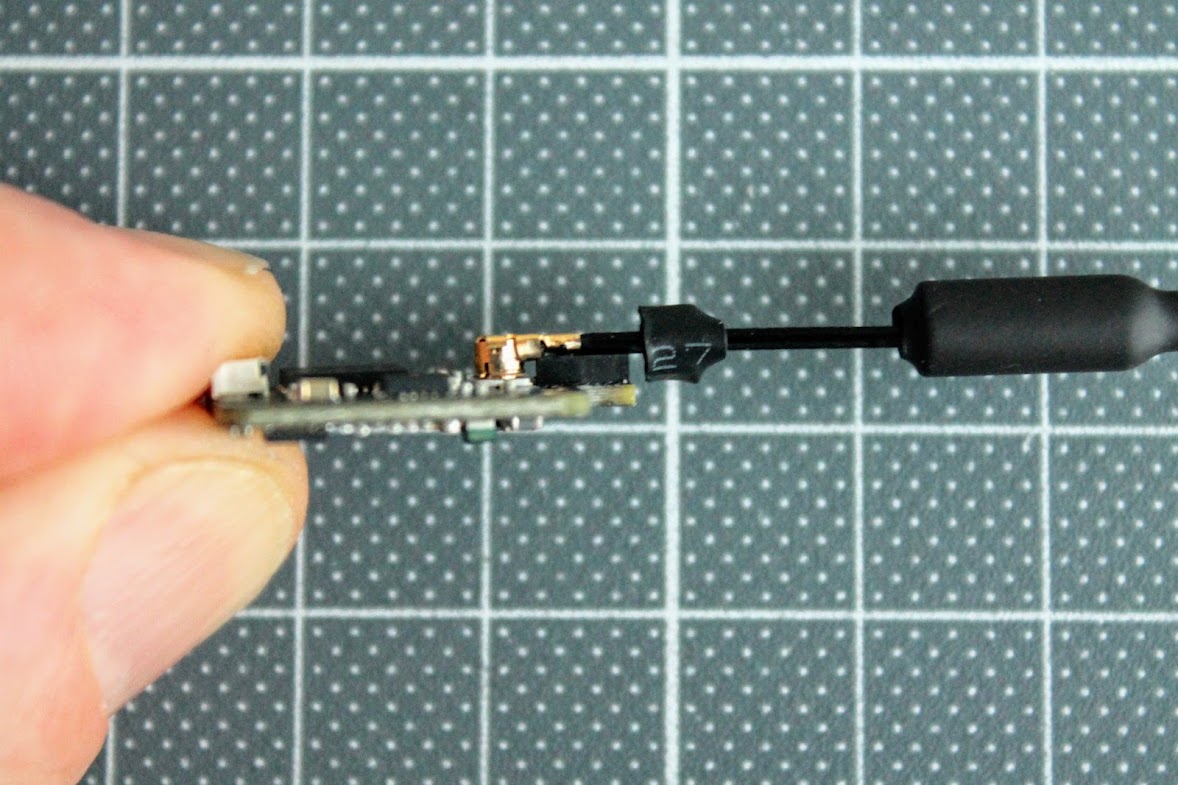 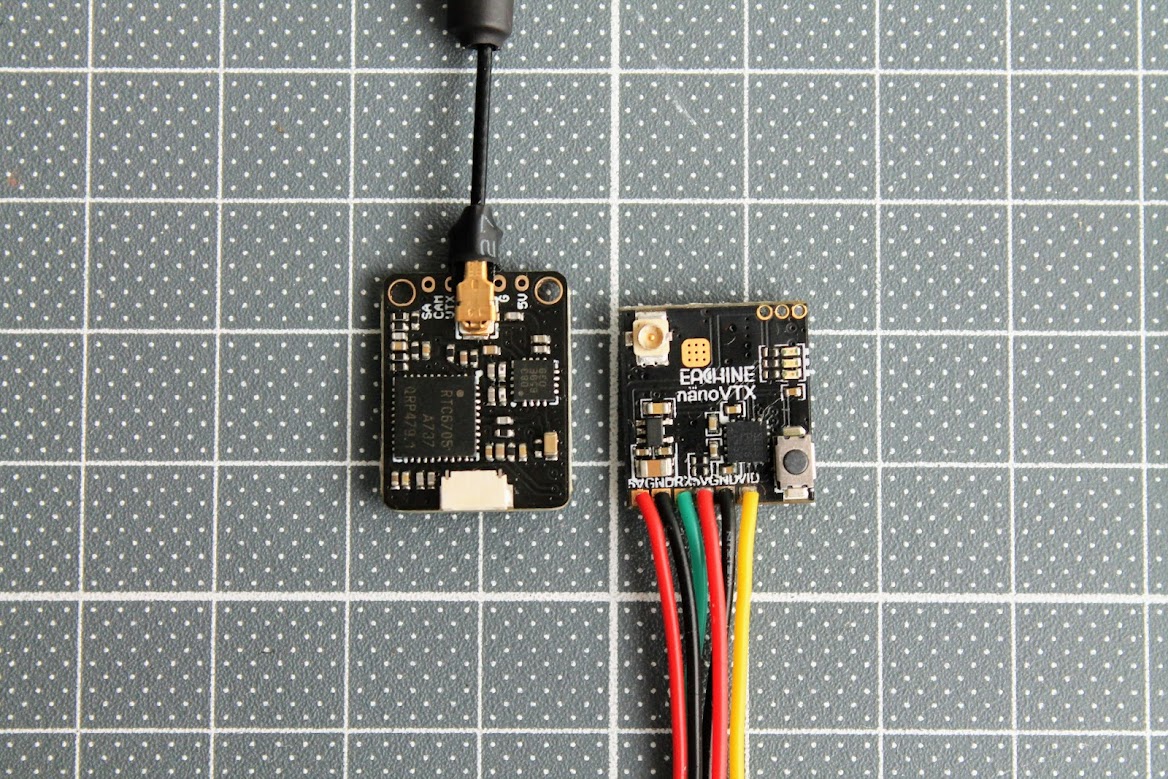 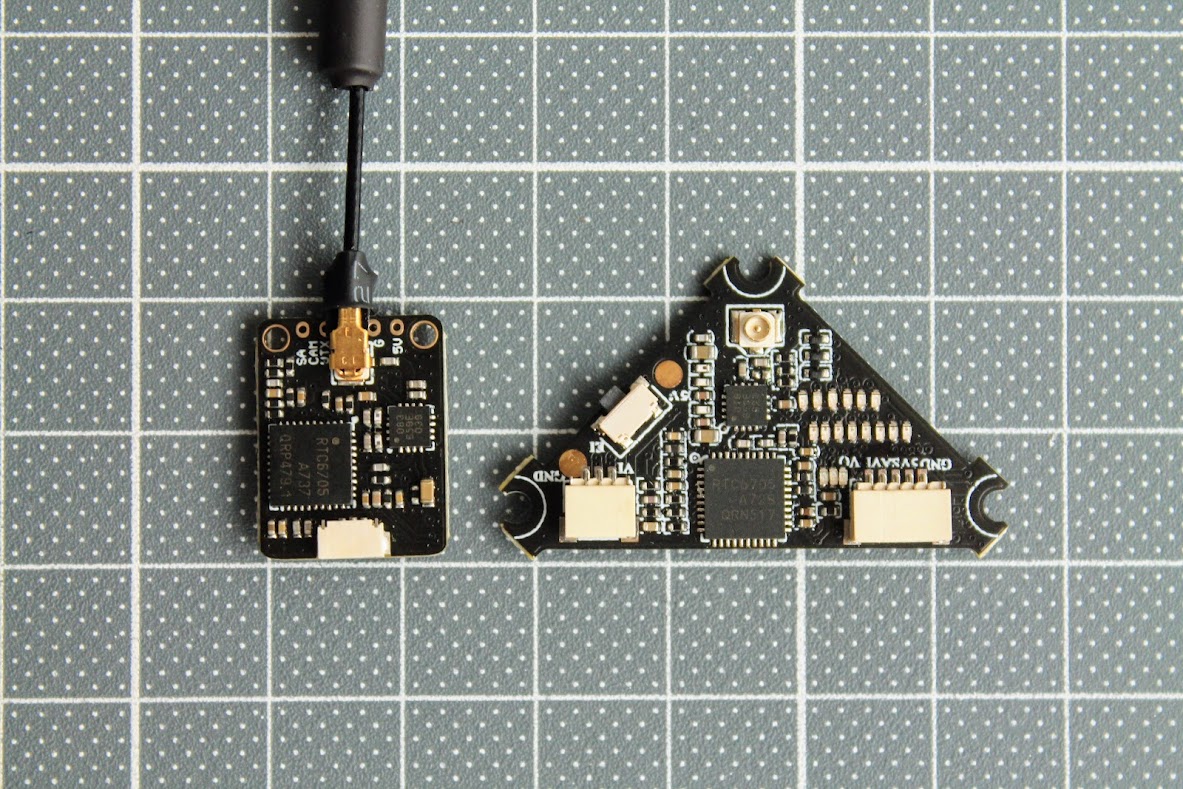 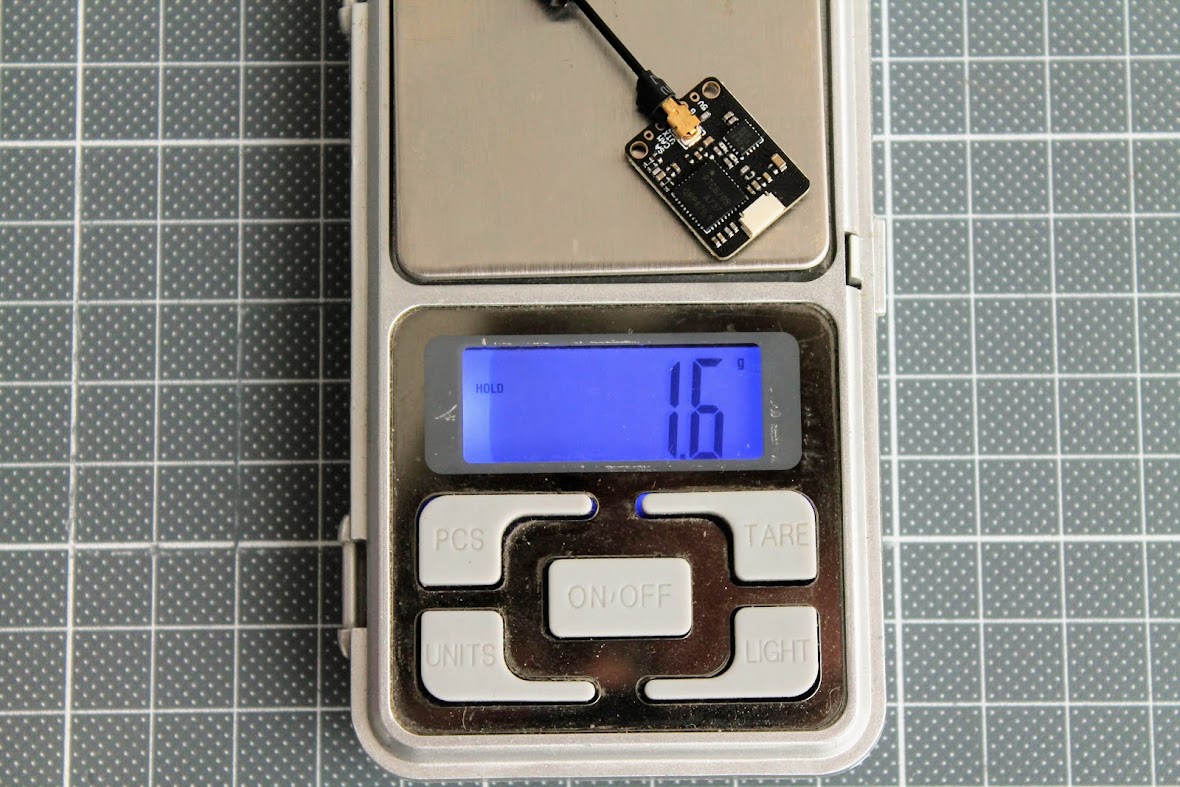 And weights only 1.1 grams without the antenna. 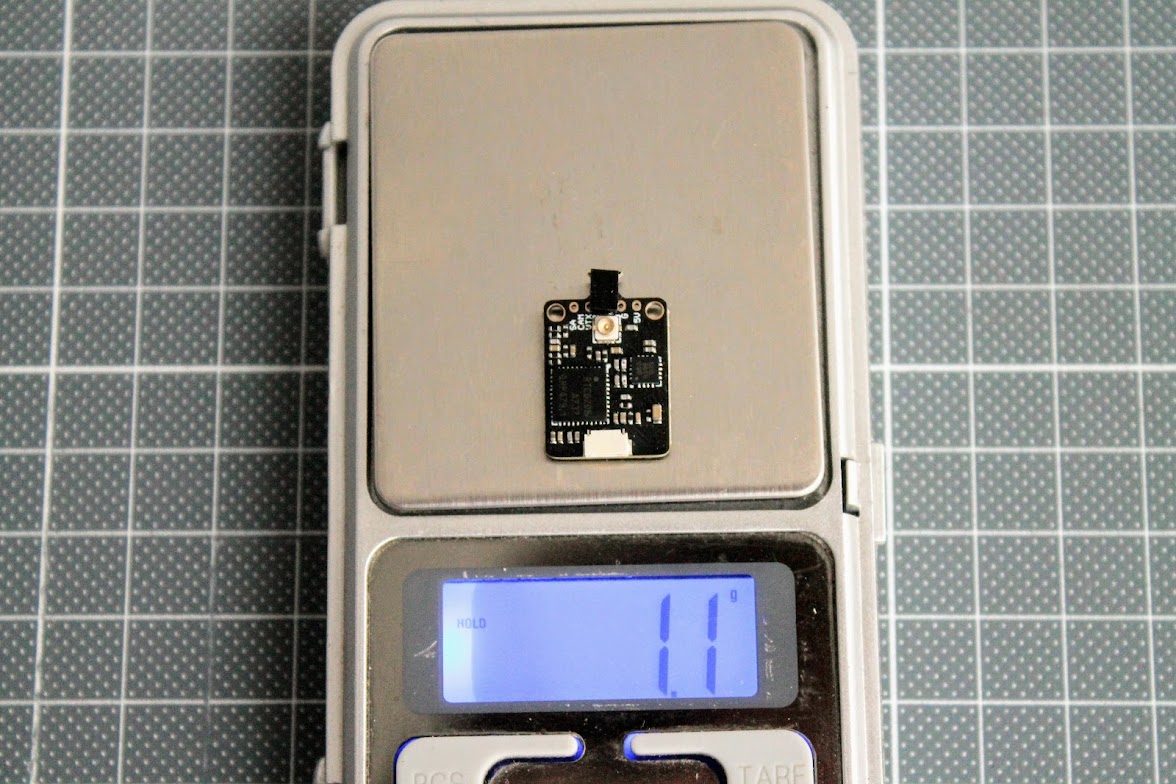 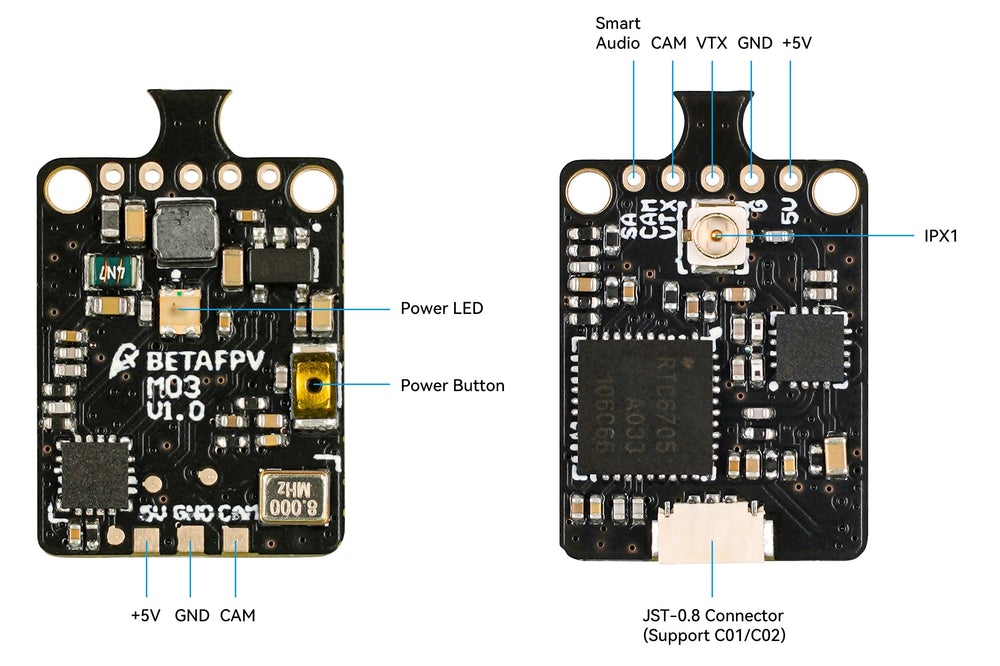 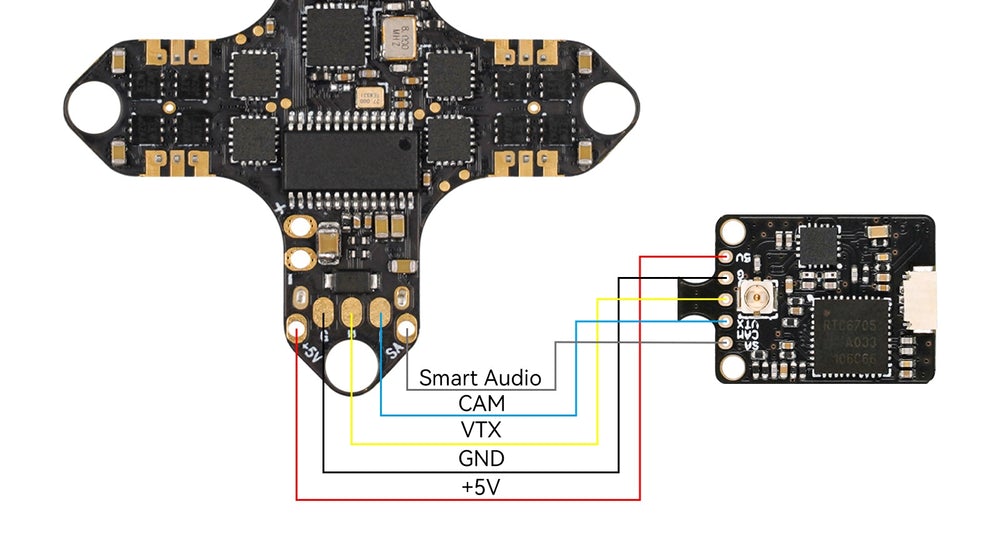 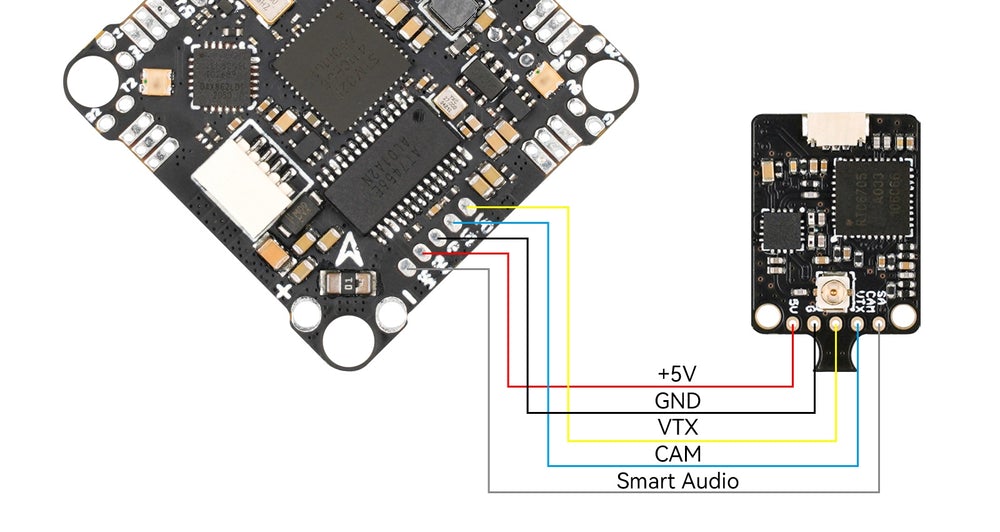 I’ve connected the BetaFPV M03 VTX to the ImmersionRC RF power meter V2 via short u.Fl to SMA pigtail. VTX was cooled with fan while taking the measurements. 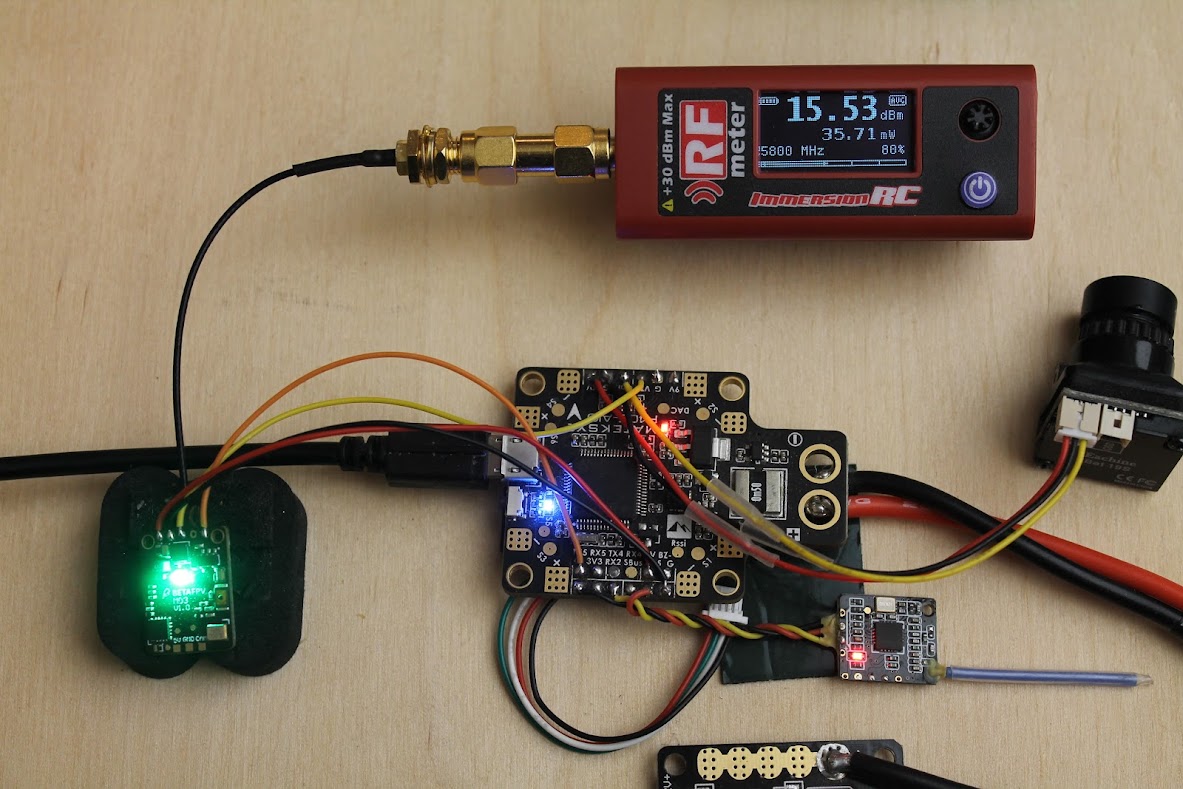 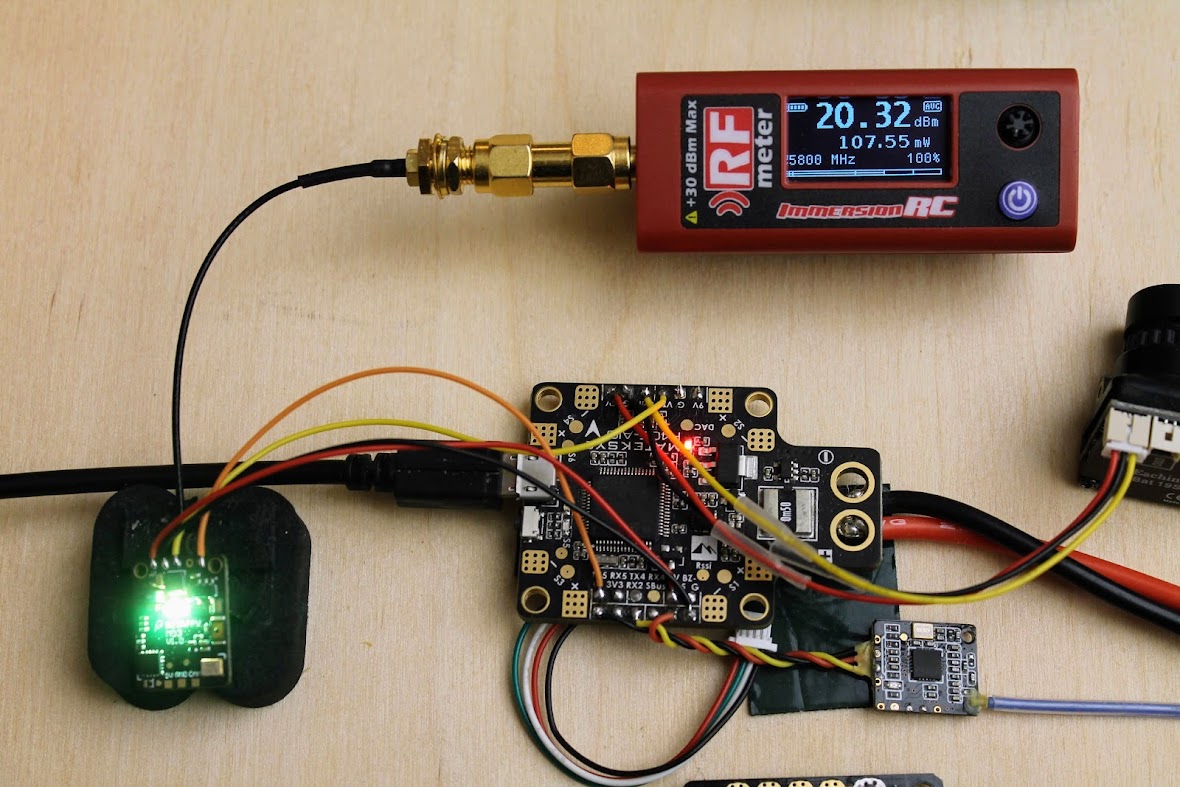 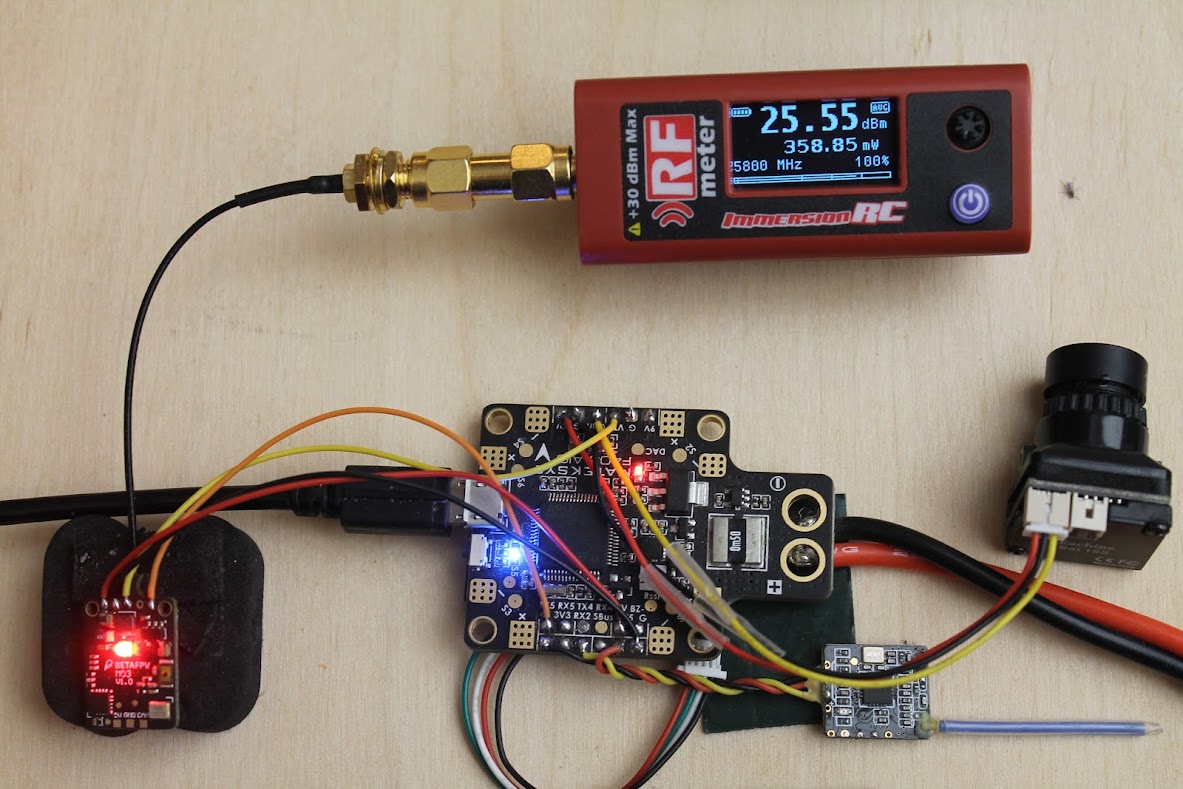 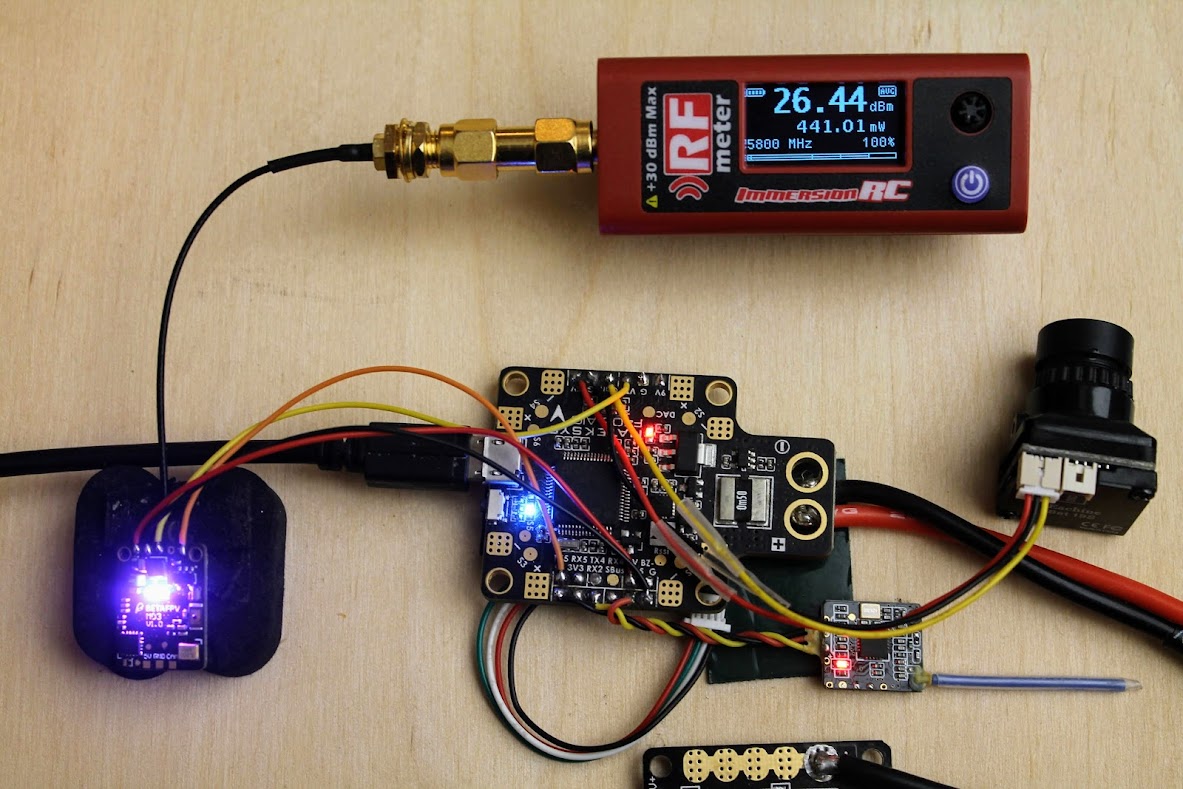 Next test – how stable its power output if the VTX is not cooled actively. So I’ve turned off the fan and let the VTX running for the 5min. The measured power output was 333mW (25.2dBm). Pretty good. The M03 VTX maintains the high power output even without active cooling. 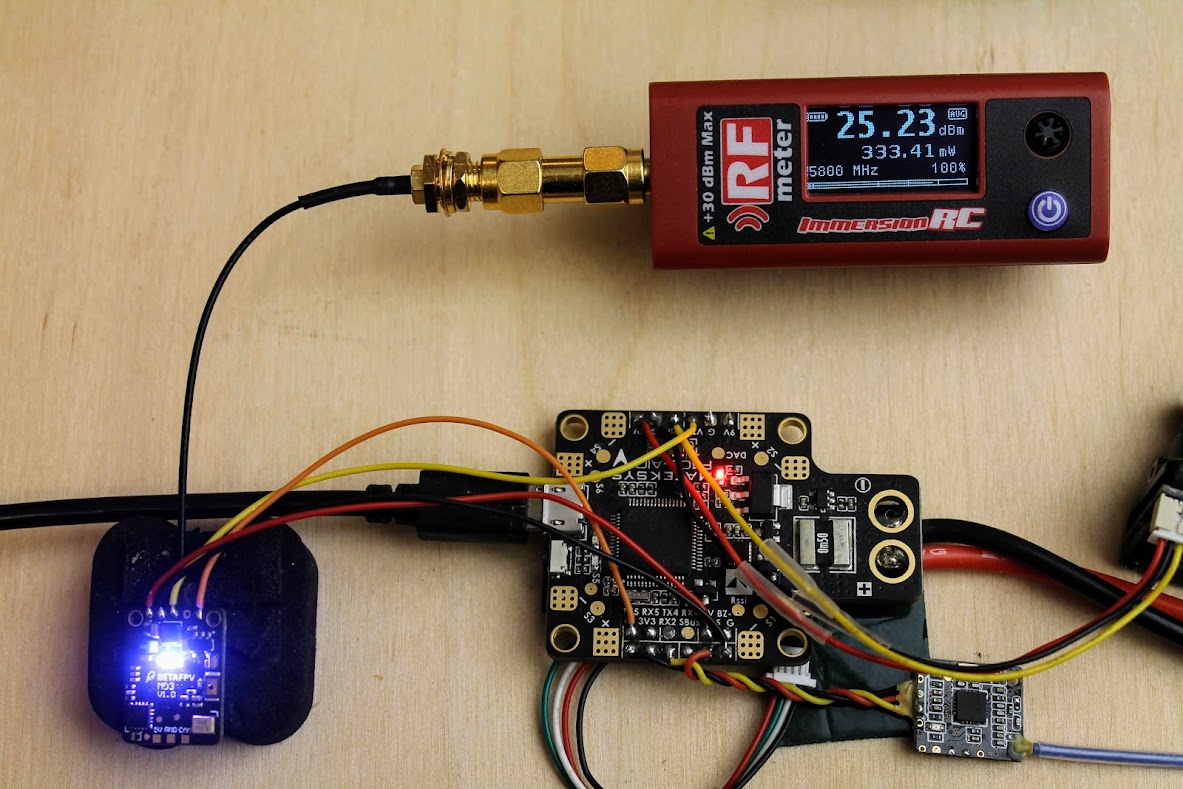 Below are the RF power outputs for all power levels. Measured at Raceband, CH5. 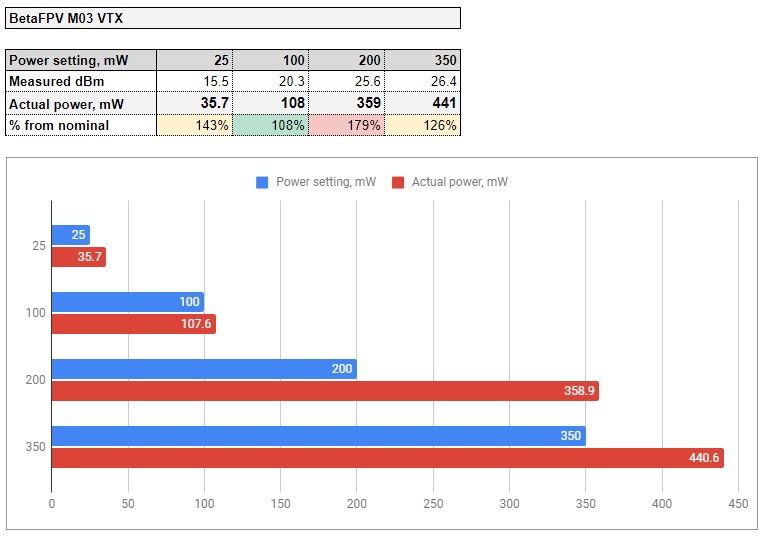 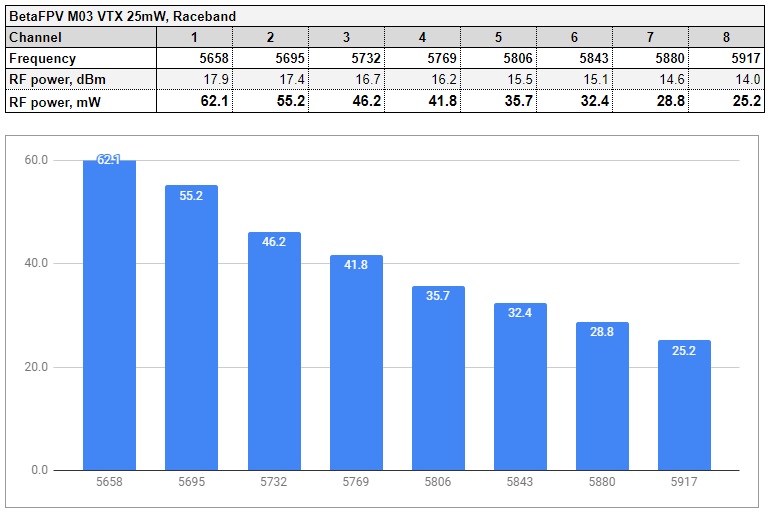 Power output vs frequency for 100mW power level on Raceband. 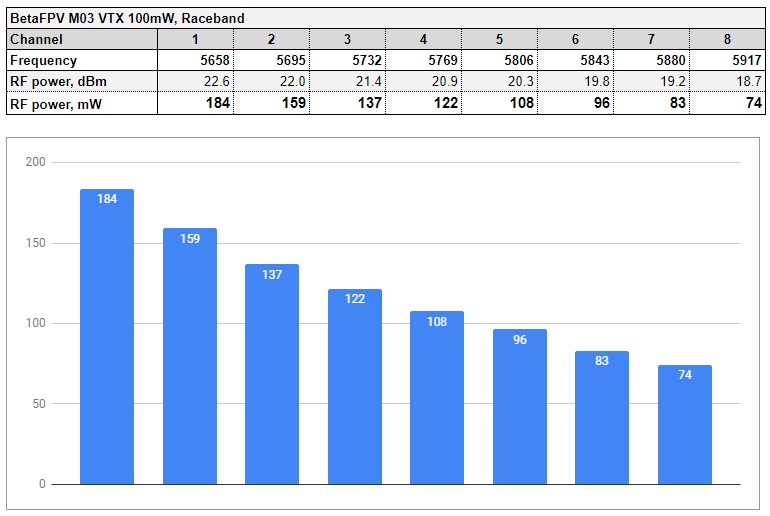 Power output vs frequency for 200mW power level on Raceband. 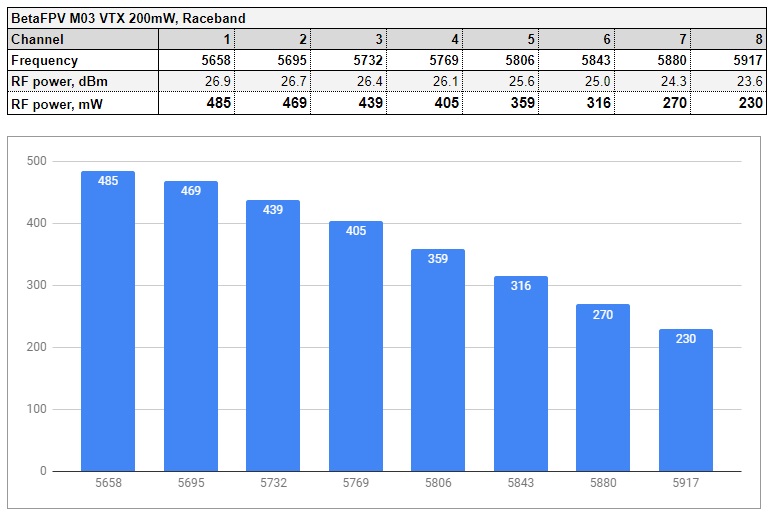 Power output vs frequency for 350mW power level on Raceband. 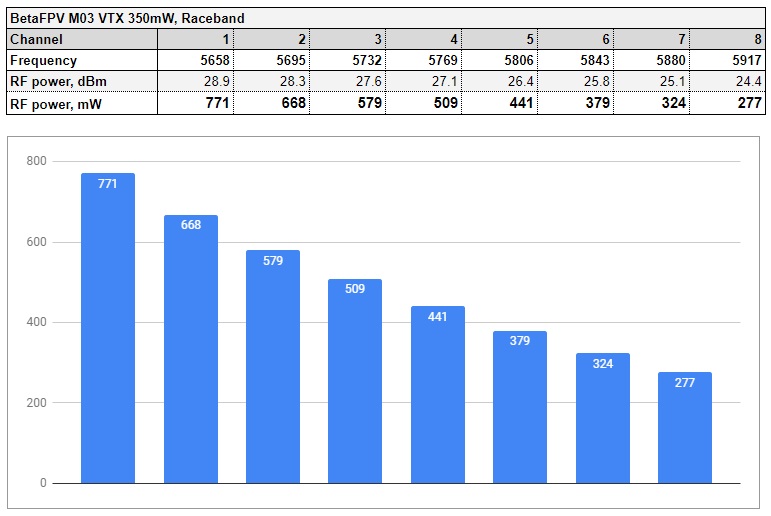 VTX has one multicolor LED indicator for power level display. Green light is for 25mW, Yellow for 100mW, Red for 200mW and Purple light indicates 350mW.

BetaFPV M03 VTX is working with TBS SmartAudio protocol. You should connect the SmartAudio wire from the VTX to the any available TX pad on the FC.

In the Betaflight Configurator, choose TBS SmartAudio protocol in the Peripherals tab

Read more about SmartAudio here: Guide: SmartAudio VTX control and how to set it up 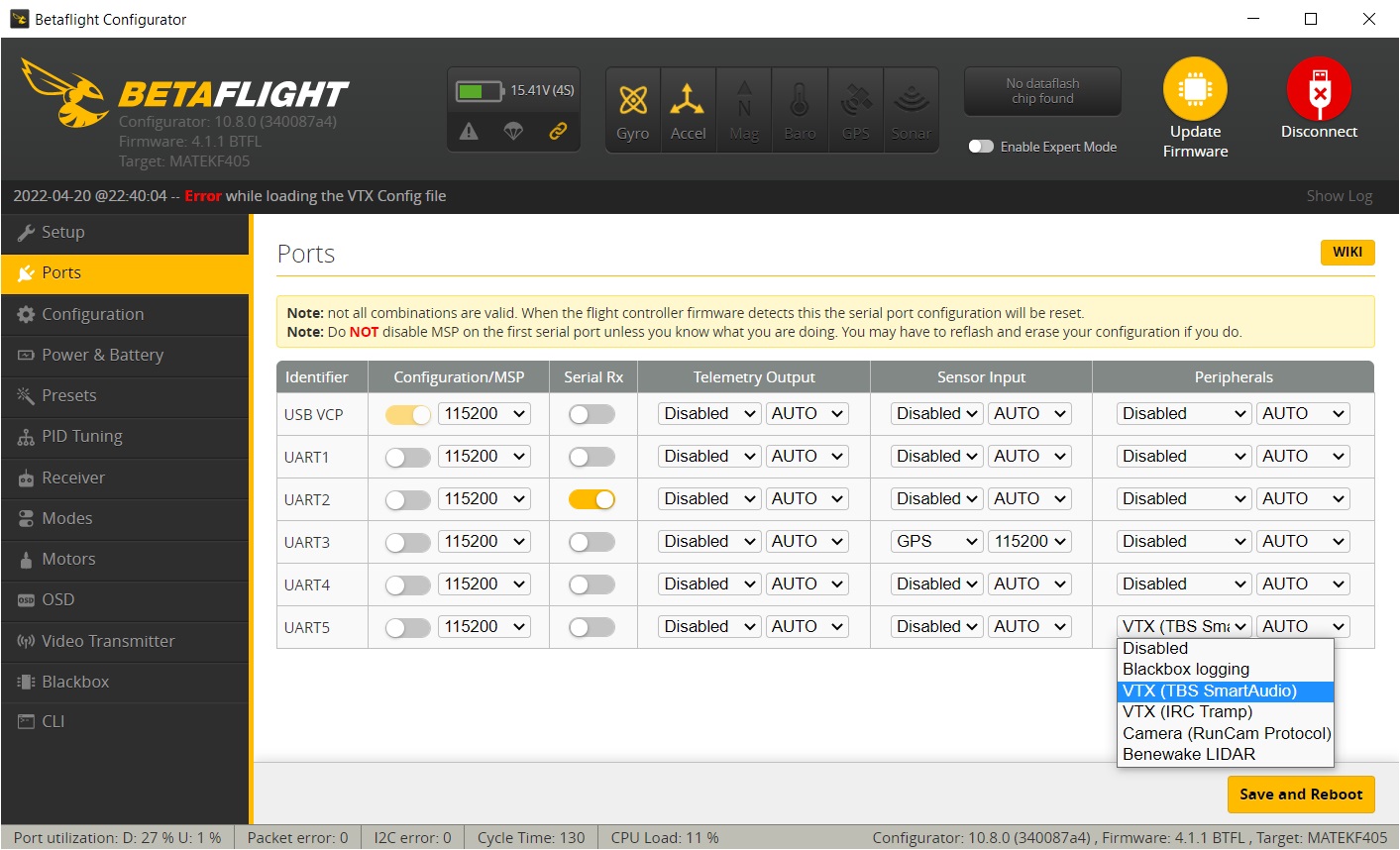 If you are using (or planning to use) the Betaflight versions 4.x  and want to control the VTX by Betaflight OSD, then you should set up the VTX Tables.

Read more on setting up the VTX tables here: VTX Tables and how to set them up

Open Betaflight Configurator, connect to the flight controller, select “Video Transmitter” tab. Load the VTX table from the file by clicking on the [Load from file] button. 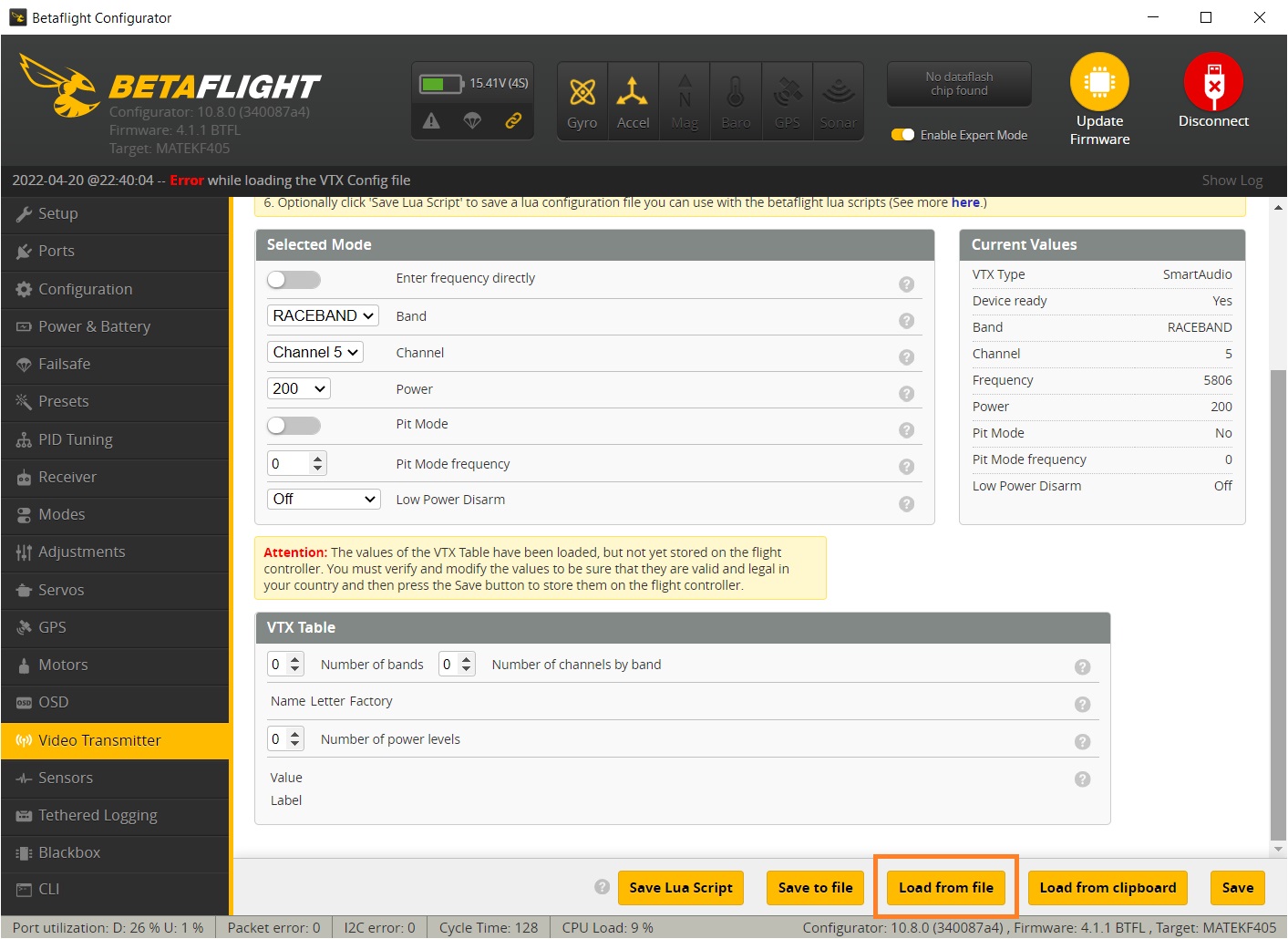 Select the VTX table file. There can be separate VTX table files for US and EU region as there are different range of the allowed frequencies to use. (Hint: European table has only the 3 channels on Raceband).

Once VTX file is loaded, you should see the VTX table with the right frequencies and power settings. 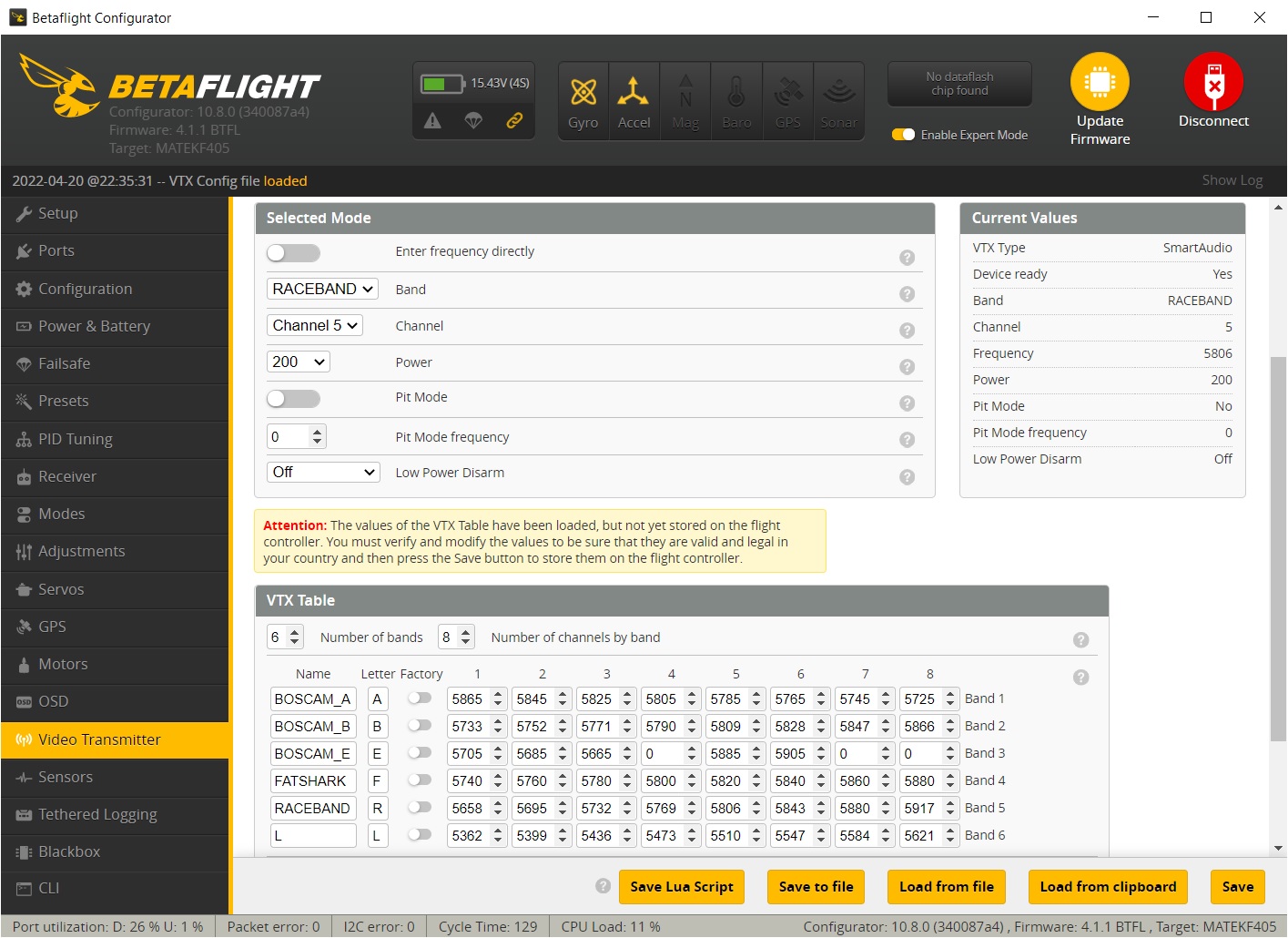 Don’t forget to hit the [Save] button.

BetaFPV M03 VTX is the smallest VTX from BetaFPV. Despite being so small it is really powerful as it can output 350mW and even more. I have recorded the power output up to 771mW on the Raceband, CH1. Power output ranges from 62 mW to 25 mW on the 25mW power setting and from 771 mW to 277 mW on the 350mW setting. On the lower channels you can get enormous amount of the power output. Have that in mind if you are looking for the maximum FPV range.

BetaFPV M03 VTX has probably the best power to weight ratio in the market. It has 401mW/1g ratio. Currently unmatched. It also set my personal record of the nano sized VTX absolute maximum power reached – 771mW.

The bottom line – M03 VTX is definitely one of the best VTX options for whoops and ultralight quadcopters. 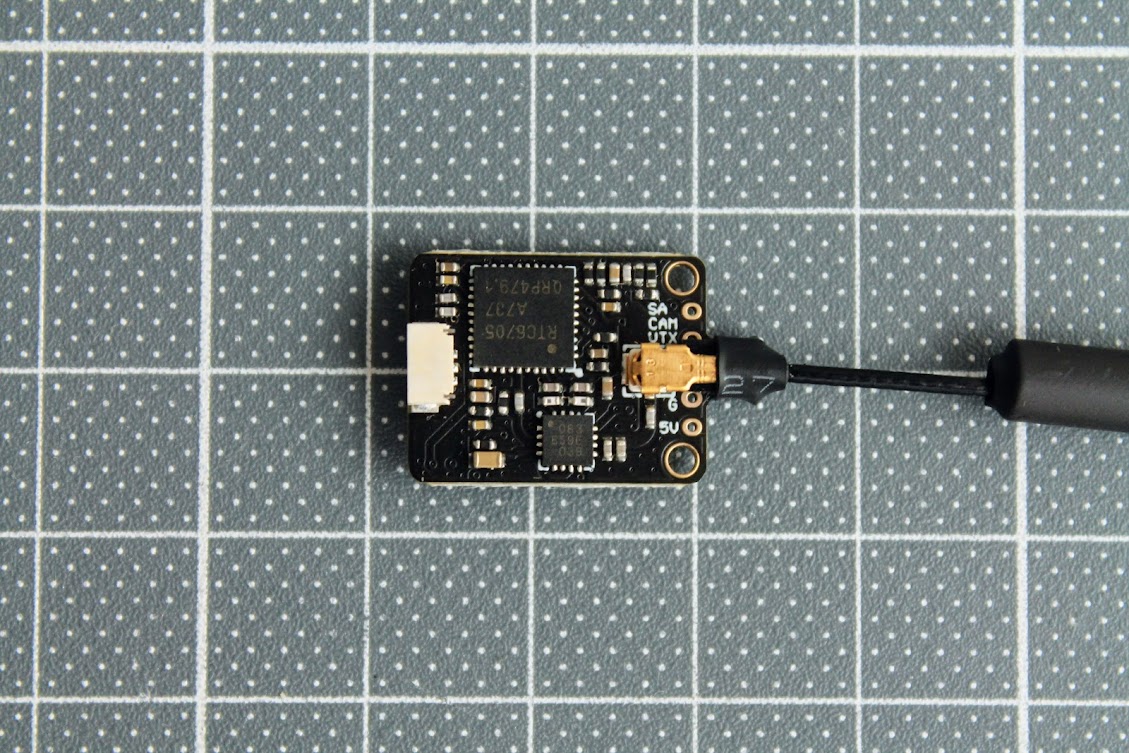 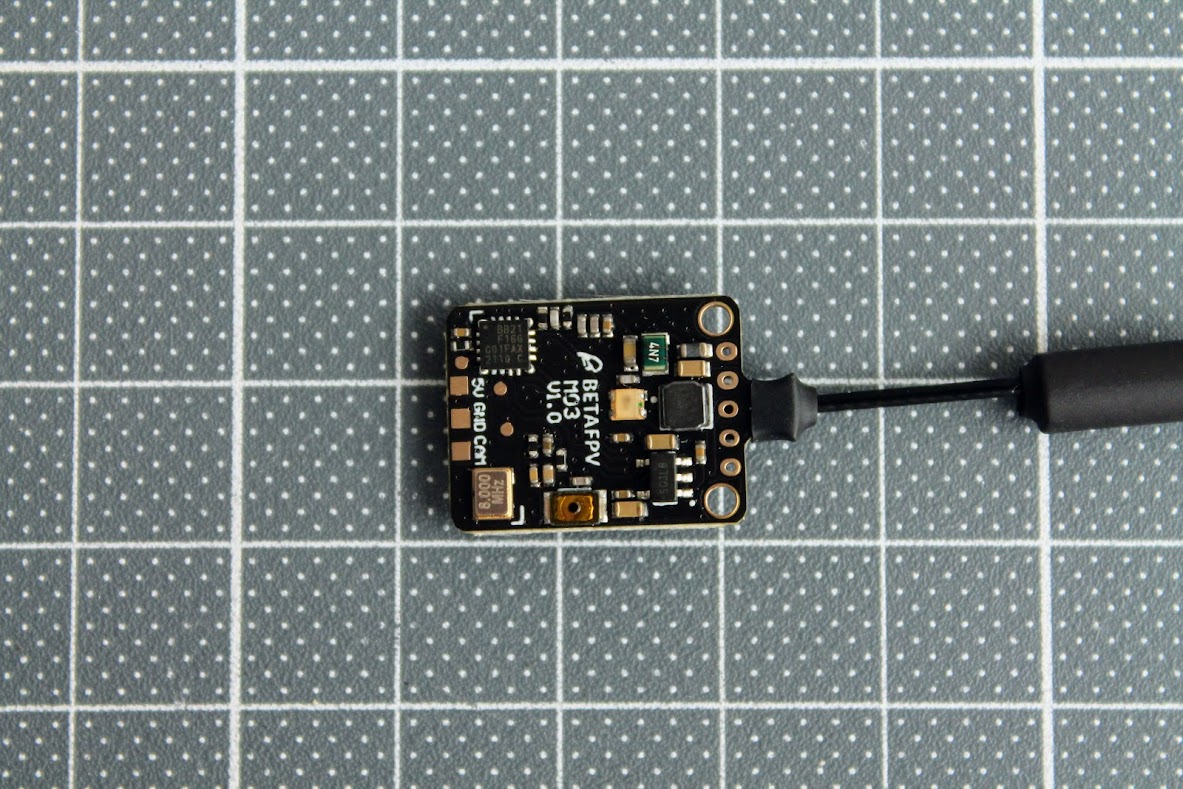 Disclaimer: This item was supplied by BetaFPV for a fair and unbiased review. BetaFPV never asked for a positive review and never influenced my opinion in any way. I’m trying my best to stay uninfluenced and give only my own opinion. All affiliate links if there are any help me purchase items for future reviews and tests.