Eachine probably has the largest range of various FPV video transmitters. Ranging from nano sized Eachine Nano VTX to long range Eachine TX806. One of the most popular VTX is Eachine TX805 (Read the review of Eachine TX805 VTX here ). It is stack mountable VTX with high power output. Recently Eachine released the newer version TX805S with even more power output – up to 1600mW!

Inside the box there is the TX805S itself, MMCX to SMA pigtail, MMCX linear antenna and the instructions leaflet. 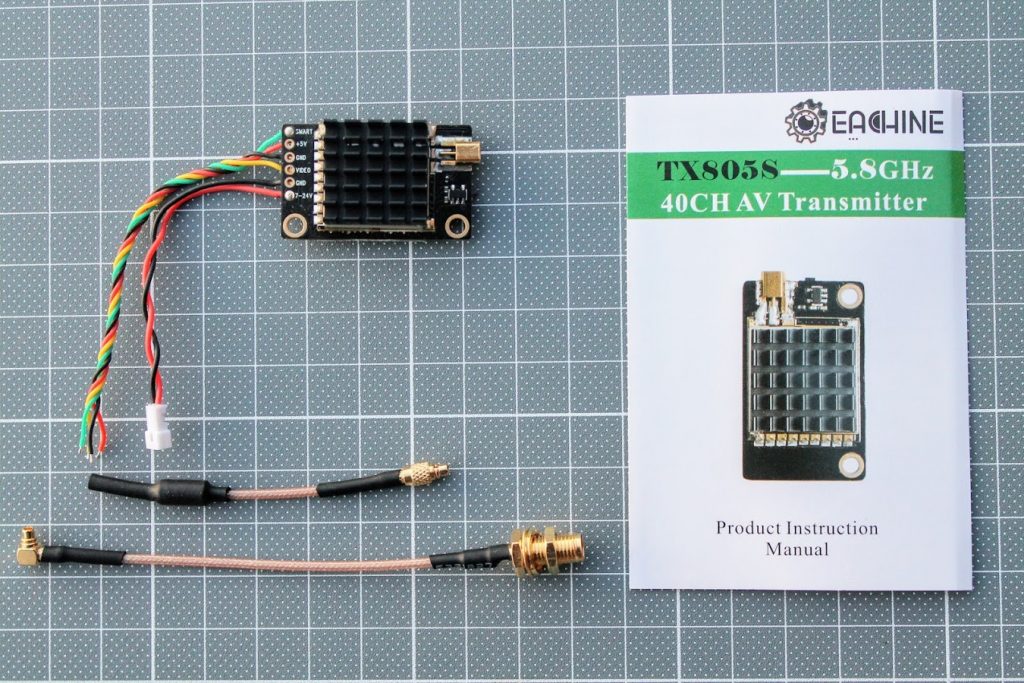 There is a large heatsink on the top PCB side. We can expect it heating up greatly as it needs additional heatsink. 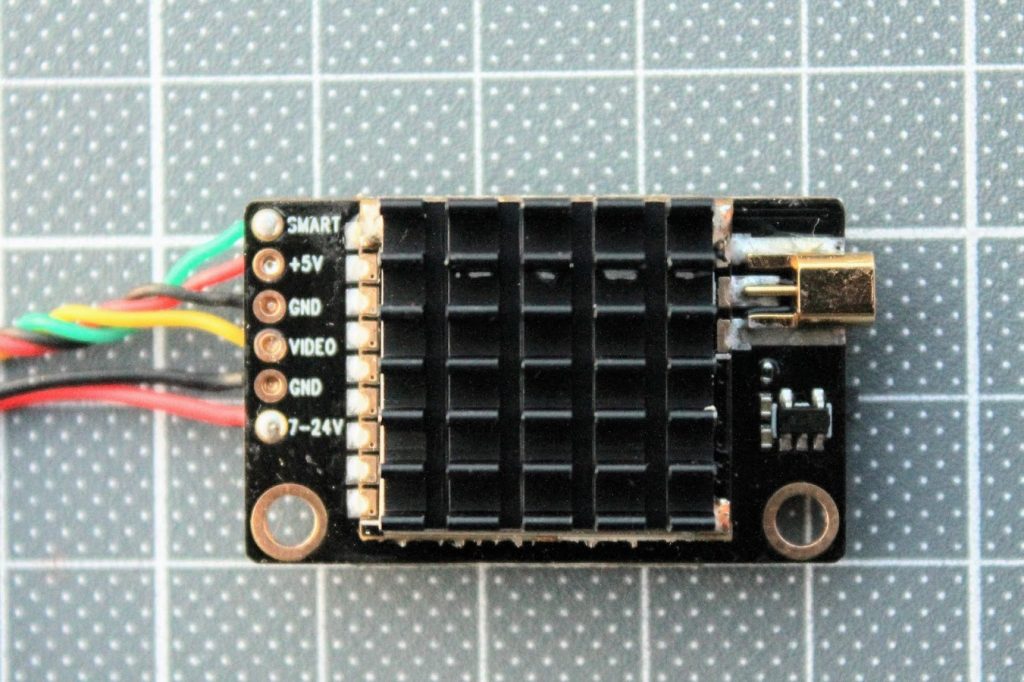 Closer view of the back side of the PCB. 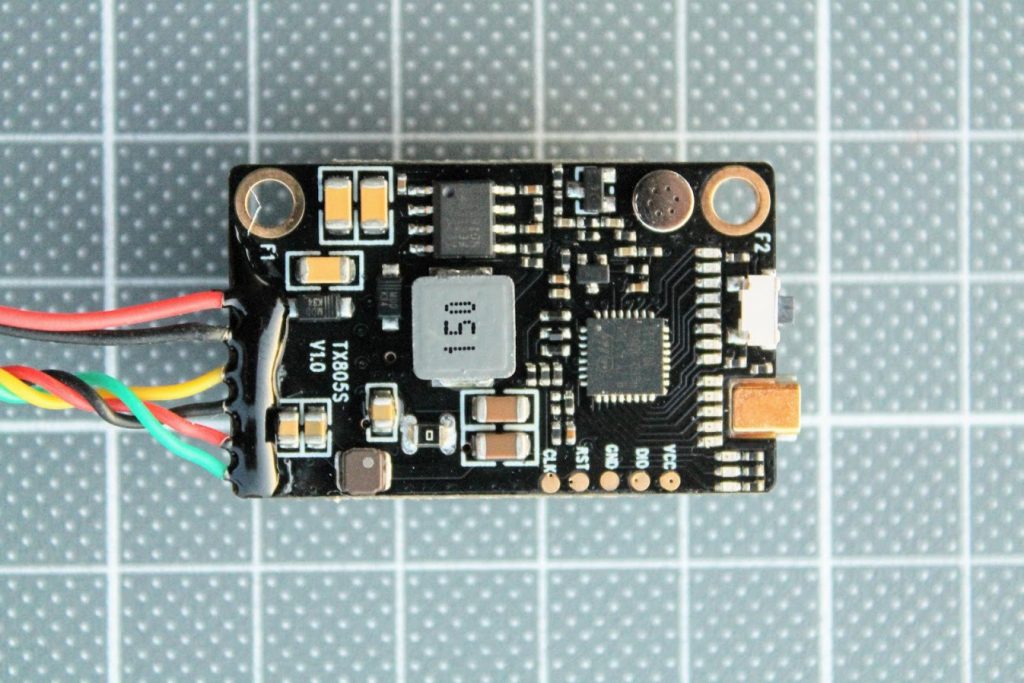 There is a channel/band/power change button and MMCX antenna socket. 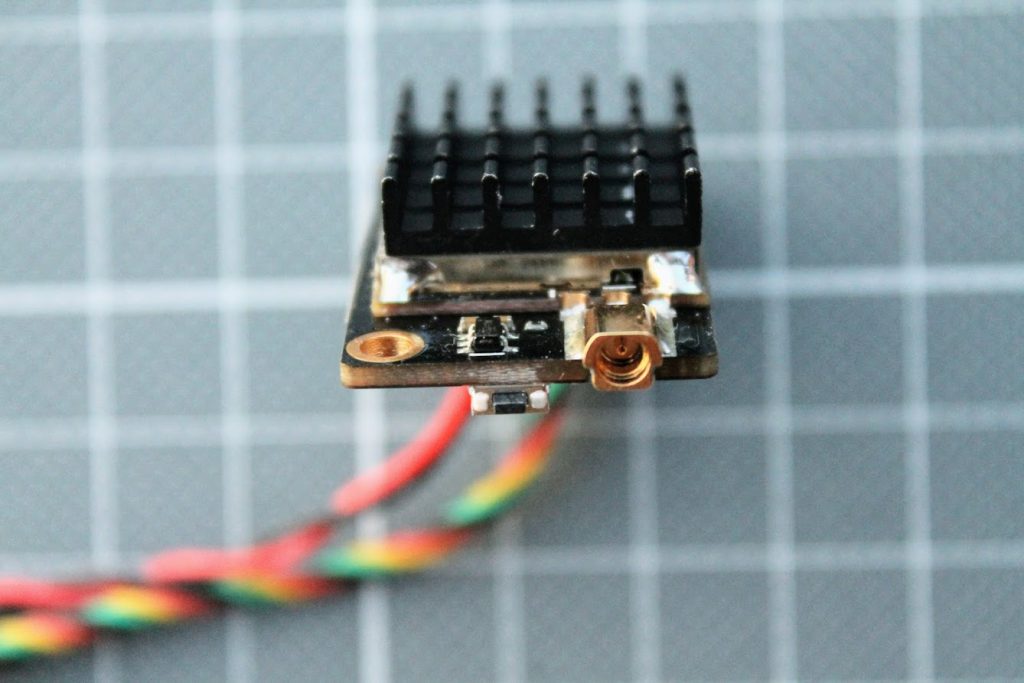 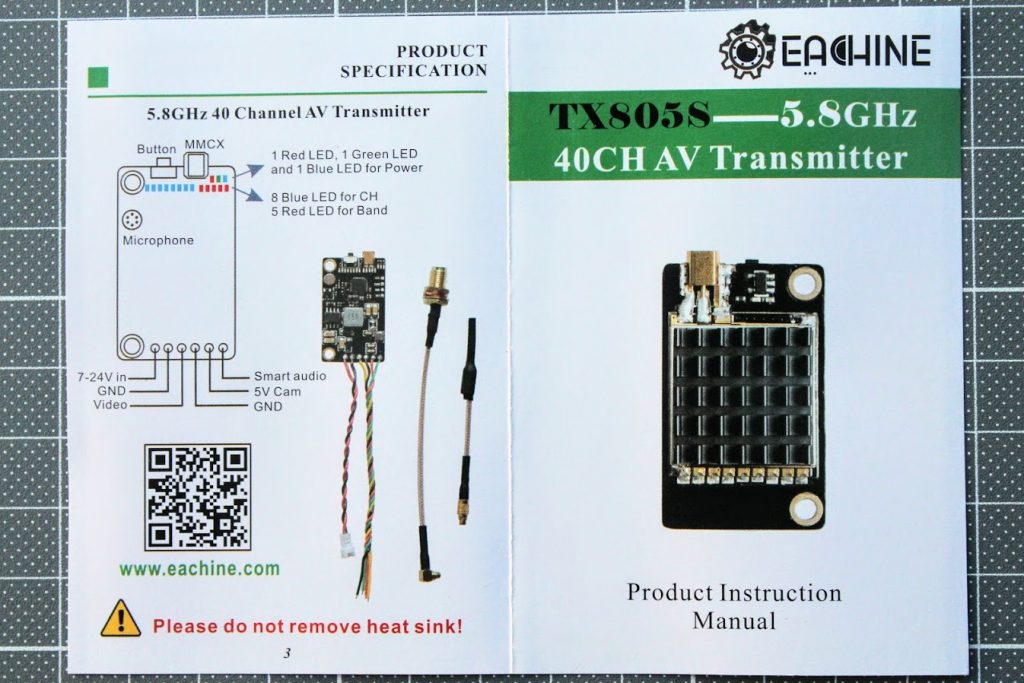 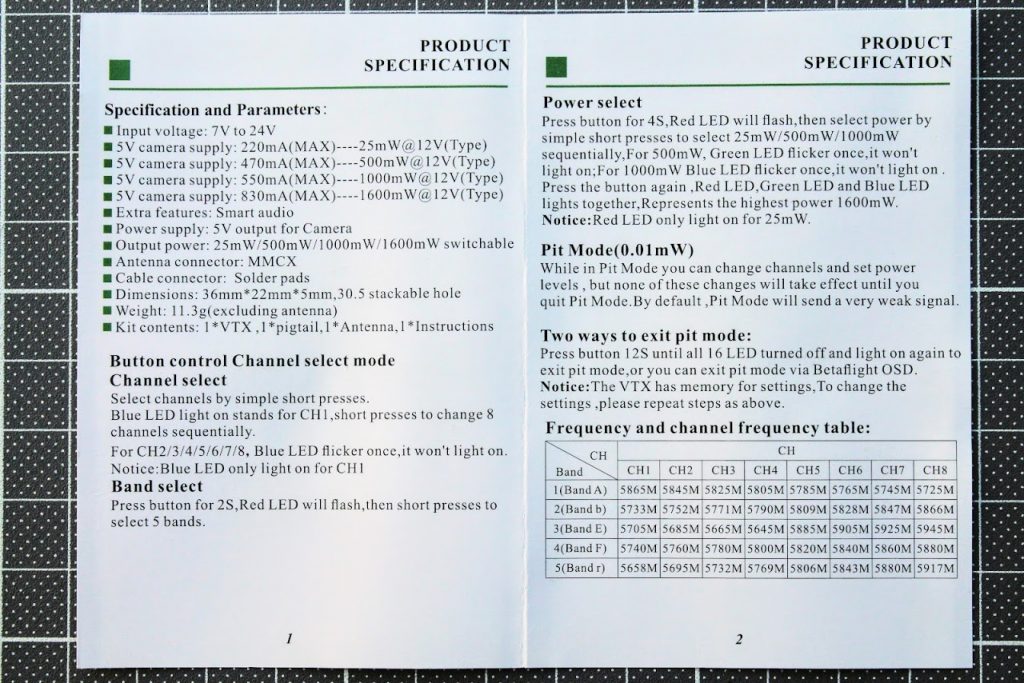 Weight of the TX805S is 10.3 grams with wires. You can shave about 0.5 gram if you will strip the connectors and shorten the wires. 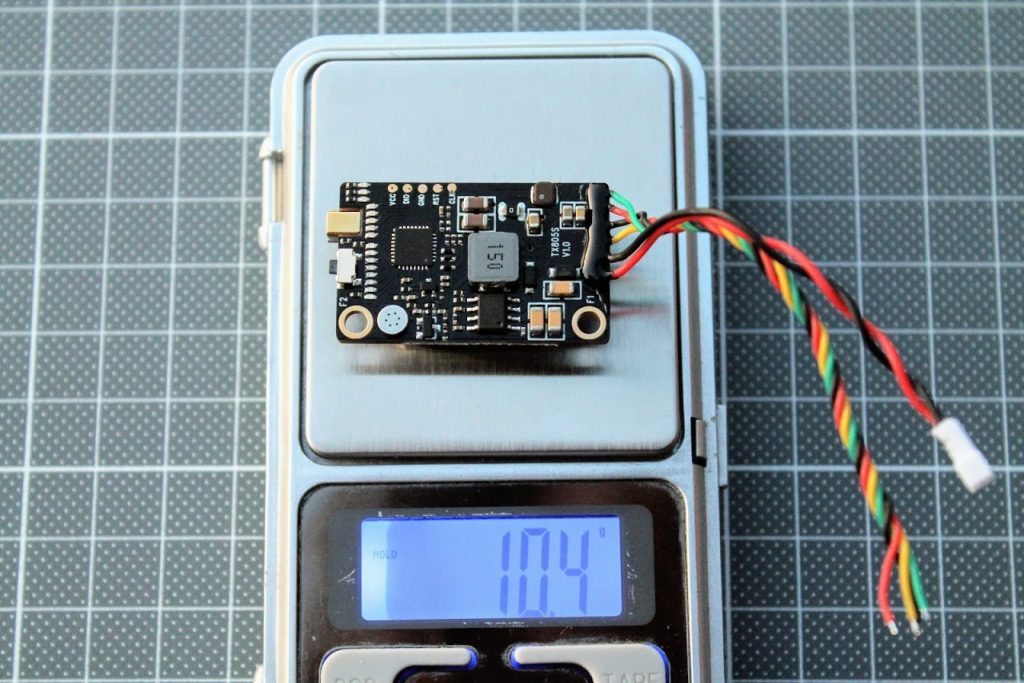 Weight of the antenna pigtail. 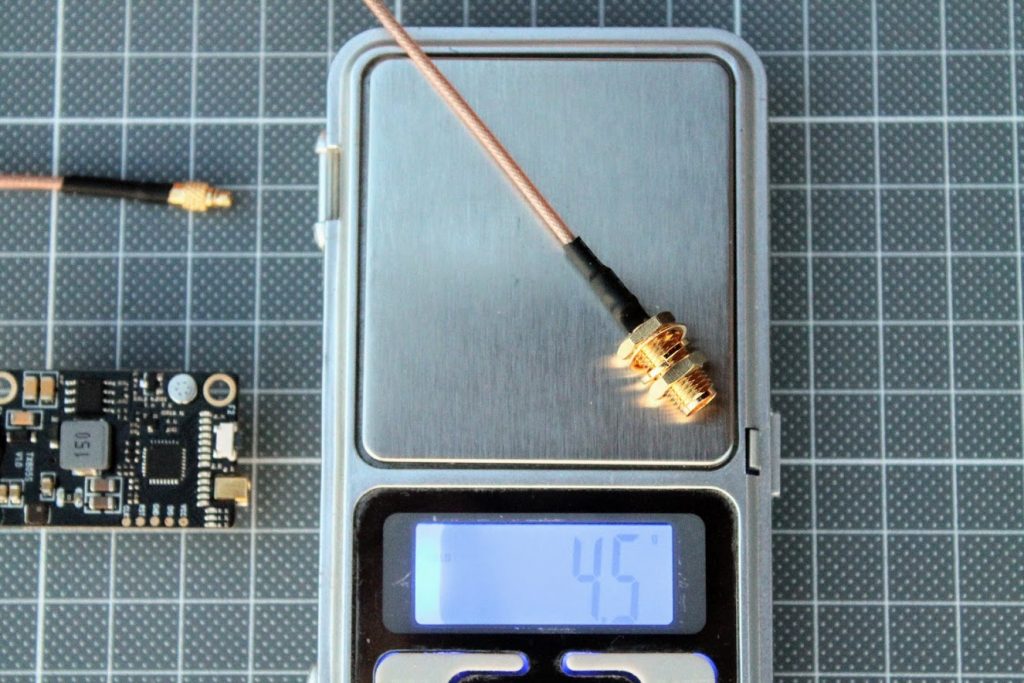 Channel select:
Select channels by simple short presses.
Blue LED light on stands for CH1,short presses to change 8 channels sequentially.
For CH2/3/4/5/6/7/8,Blue LED flicker once,it won’t light on.
Notice:Blue LED only light on for CH1
Band select:
Press button for 2S,Red LED will flash,then short presses to select 5 bands.
Power select:
Press button for 4S, Red LED will flash, then select power by simple short presses to select 25mW/500mW/1000mW sequentially,
Red LED lights on for 25mW. For 500mW, Green LED lights on. For 1000mW Blue LED lights on. Press the button again and Red LED,Green LED and Blue LED lights together, representing the highest power 1600mW.
Pit Mode(0.01mW)
While in Pit Mode you can change channels and set power levels, but none of these changes will take effect until you quit Pit Mode. By default, Pit Mode will send a very weak signal

The TX805S was connected to the immersion RF power meter V2 for power output test. VTX was actively cooled with fan while taking the measurements. Measurements were made on Raceband CH5 (5806 MHz). Using the included antenna SMA pigtail. 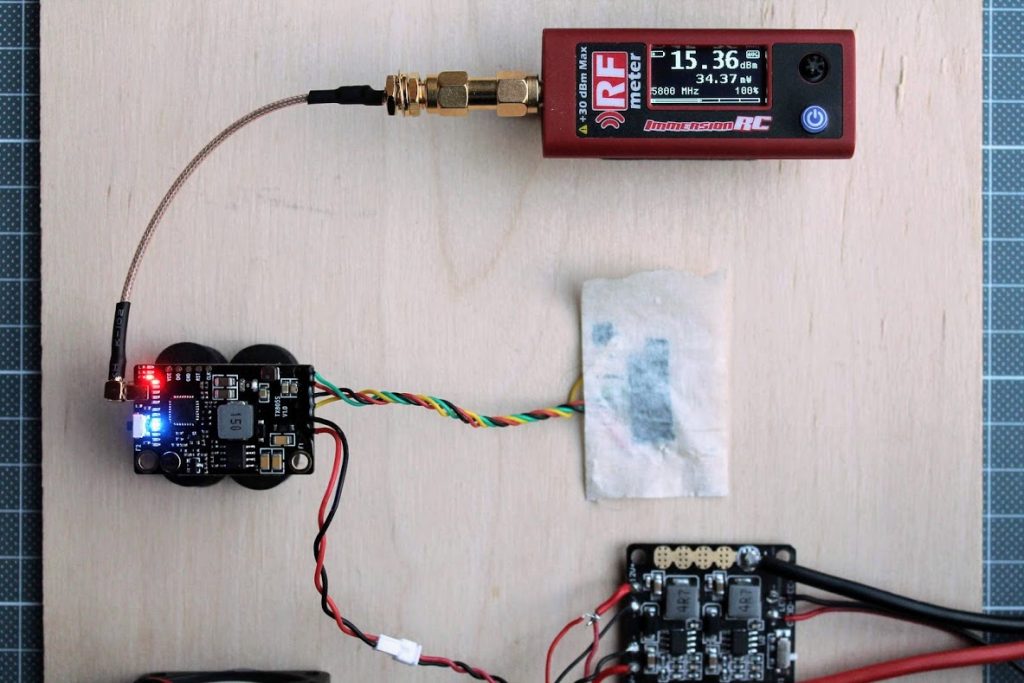 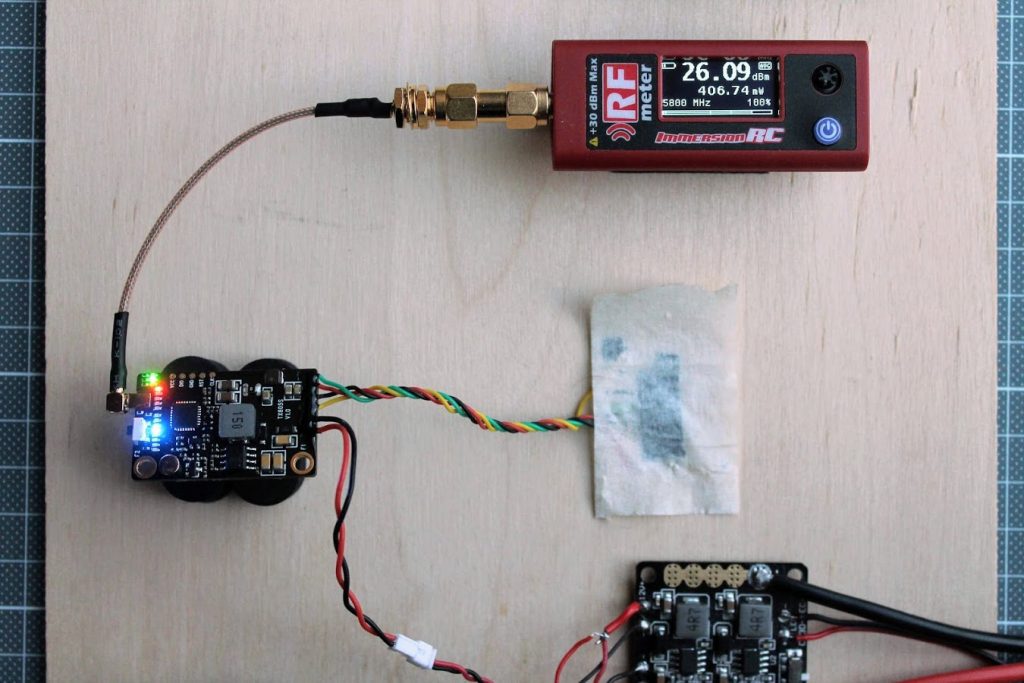 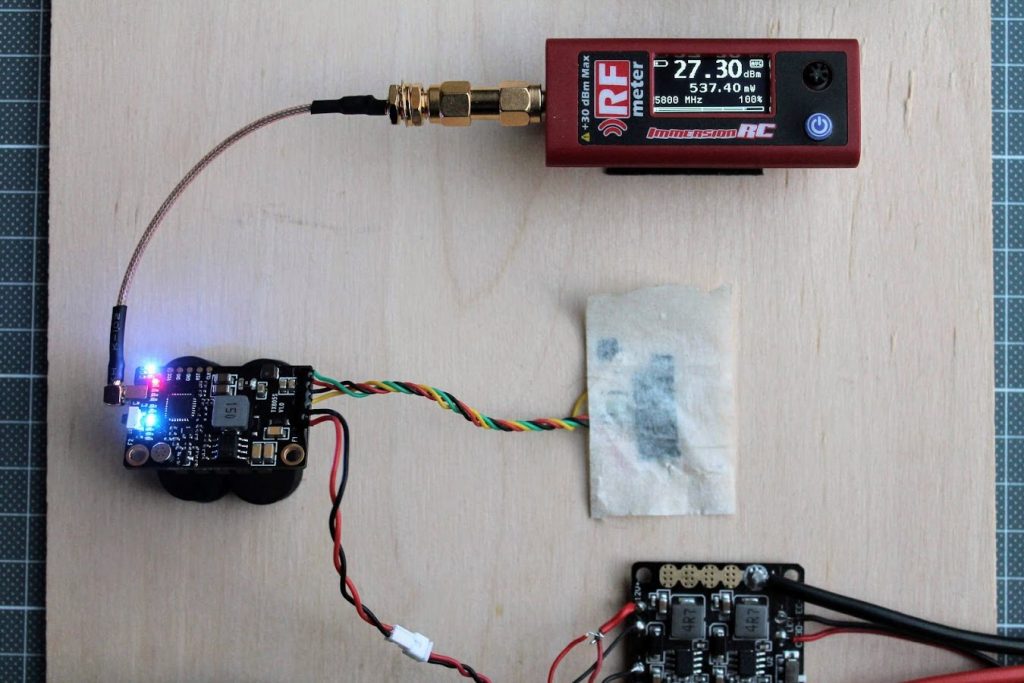 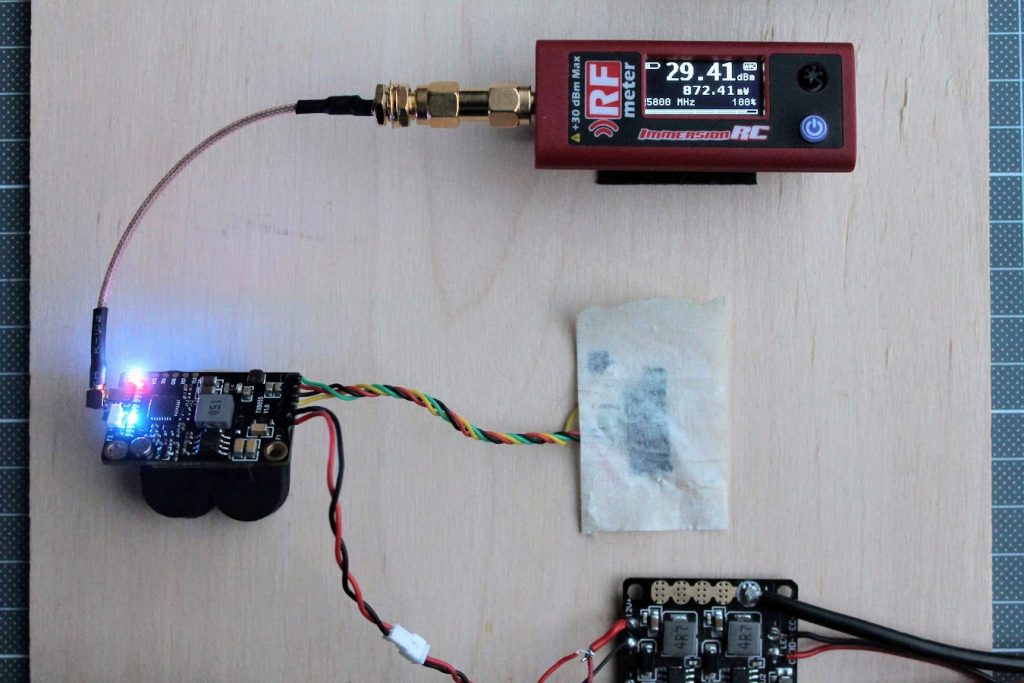 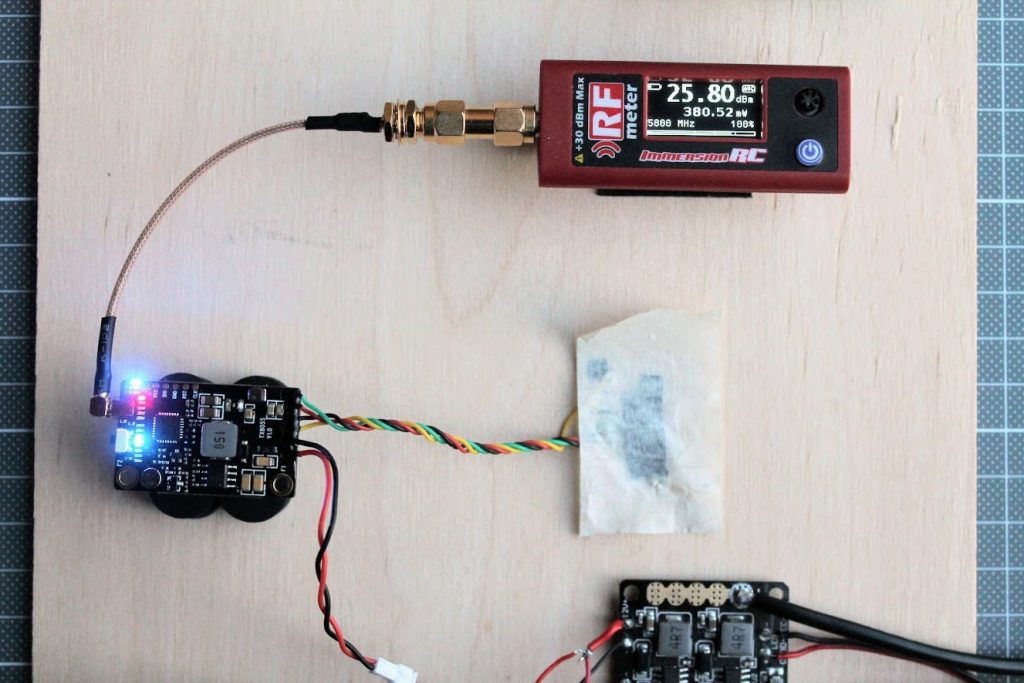 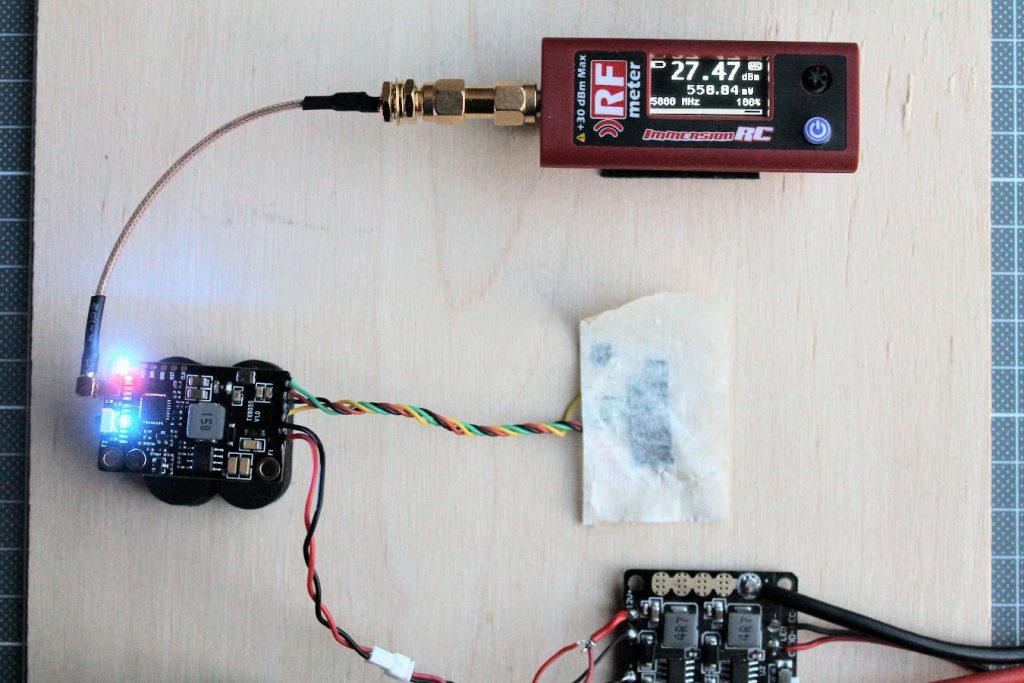 And after that it overheats and turns off. The RF power output drops to “zero”. VTX is extremely hot. 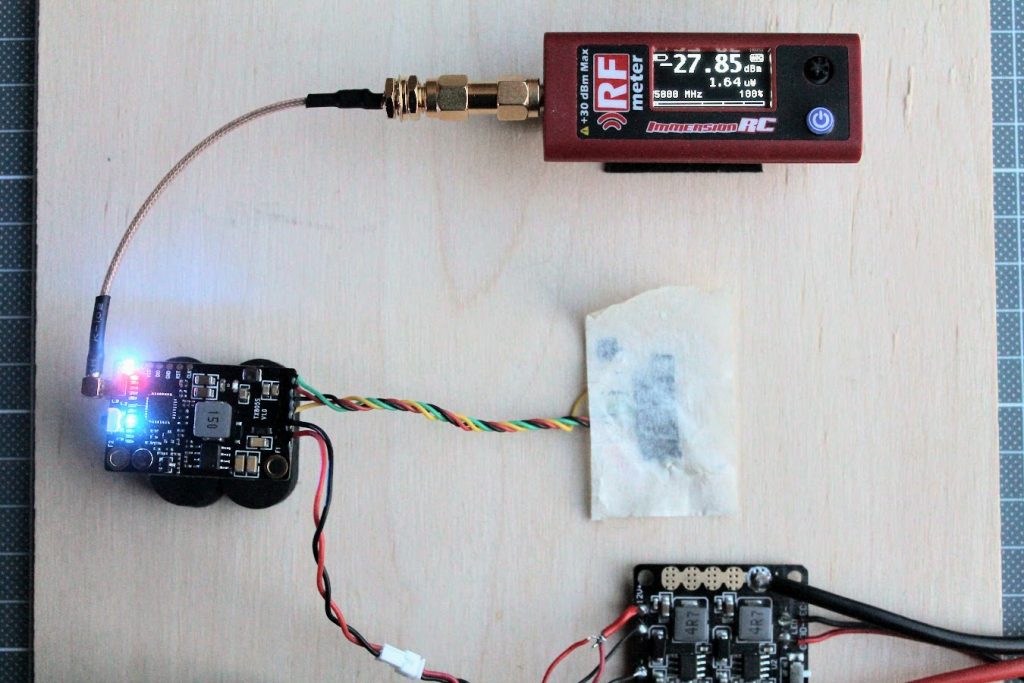 Here is the RF power output and electrical current consumption for all power levels. Measured at Raceband, CH5. 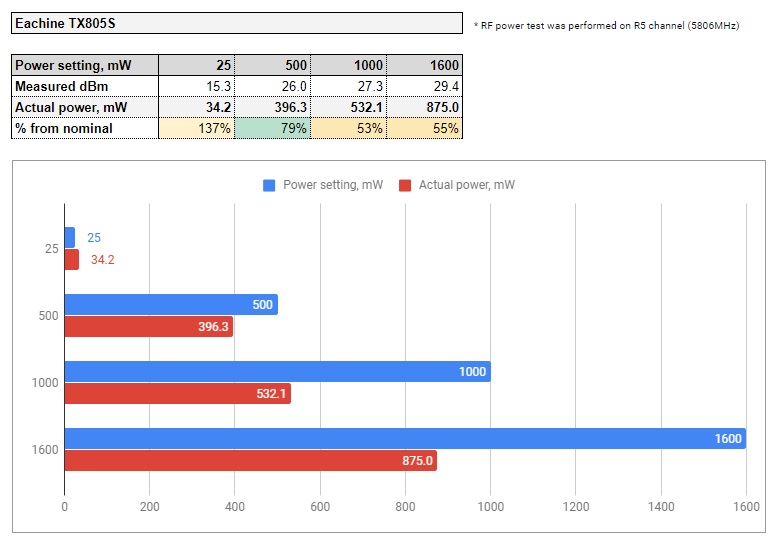 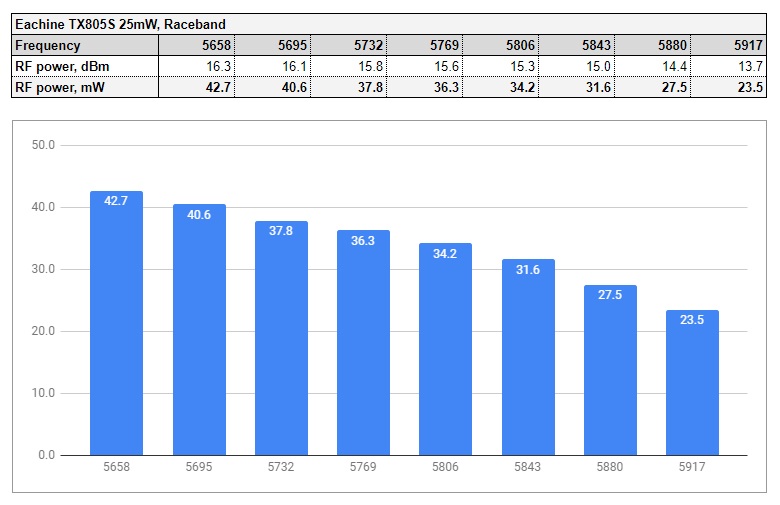 Power output vs frequency for 500mW power level on Raceband. 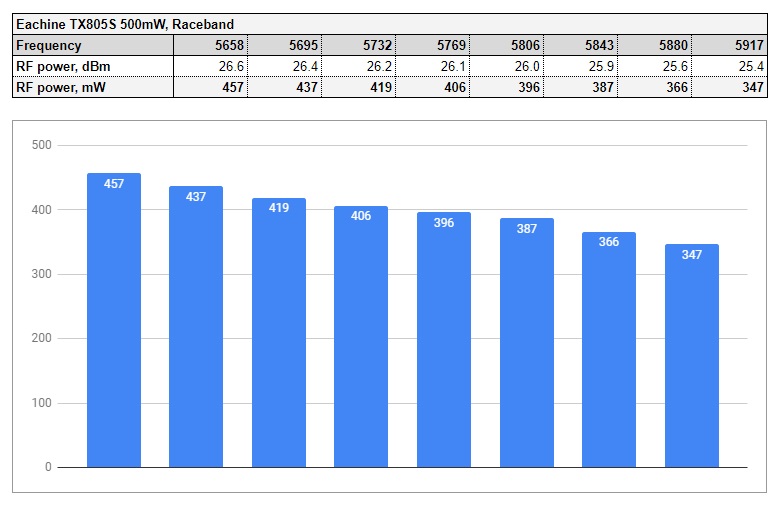 Power output vs frequency for 1000mW power level on Raceband. 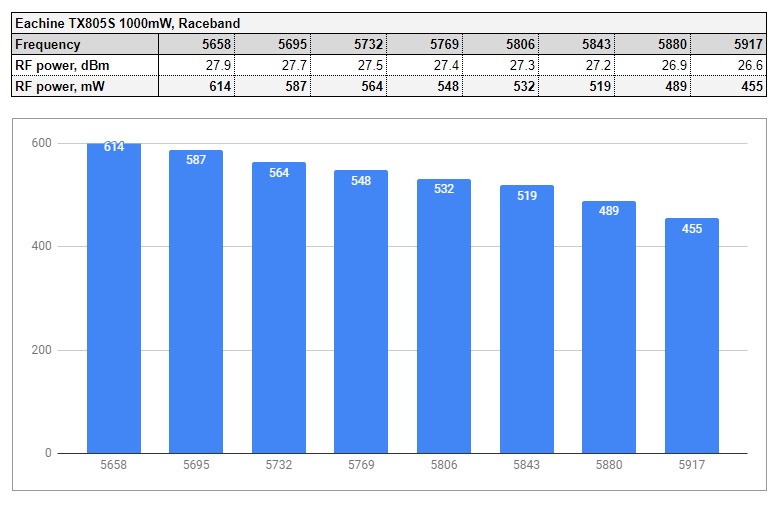 Power output vs frequency for 1600mW power level on Raceband. 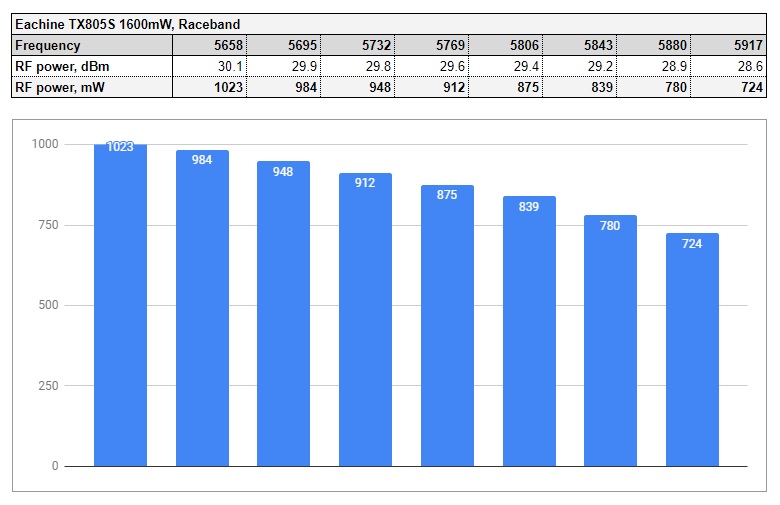 Eachine TX805S is “more powerful” version of the Eachine TX805. More power output means more heating, thus it has heatsink added. Despite the added heatsink it can easily overheat and shut down the RF output if not cooled actively with enough airflow. You shouldn’t burry this VTX deep inside your aircraft, better stick it on the outside where it could be cooled actively.

The power output tests show that the emitted power does not correspond to the nominal values and in fact it is much lower as it should be (max 614mW @ 1000mW setting and max 1023mW @ 1600mW setting). But it is significantly more than its predecessor Eachine TX805.

If you are looking for long range VTX, I would recommend the Eachine Leaf TX806. During the power output tests it overpowered TX805S, outputing max 1288mW and maintaining the stable power output even without active cooling.

Disclaimer: This item was supplied by Banggood for a fair and unbiased review. Banggood never asked for a positive review and never infuenced my opinion in any way. I’m trying my best to stay uninfluenced and give only my own opinion. All affiliate links if there are any help me purchase items for future reviews.